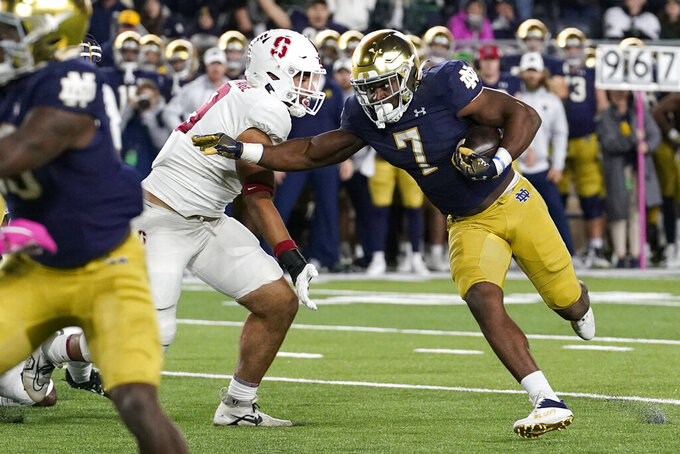 The Cardinal (2-4), who blew a two-touchdown lead against Oregon State a week earlier, put the game away when Stanford safety Jonathan McGill broke up a pass by Drew Pyne on fourth-and-7 from the Notre Dame 25-yard line with 1:04 left. It was Stanford’s first win against an FBS opponent since beating then-No. 3 Oregon 31-24 in overtime on Oct. 2, 2021.

“We needed that. We really did," Stanford coach David Shaw said. "Early in the week, I anticipated it being really tough to get our guys going again and it was not.”

Shaw said the Cardinal didn't let the near-miss against Oregon State make them give up hope.

As difficult as last week’s loss was in the fourth quarter, our guys felt it, they felt like they were close. They felt we didn’t need to scrap everything, it, didn’t need to change everything.”

After the game, the Cardinal ran to the end of the field where their fans were and celebrated.

It’s the second embarrassing home loss of the season for the Irish (3-3). The Irish were beaten 26-21 by Marshall in the second game of the season, but had won three straight since. Notre Dame coach Marcus Freeman said it comes down to execution.

“We weren’t running the ball effectively. We also weren’t throwing the ball as effectively as we wanted,” he said. "It wasn’t a lack of effort in the game. It wasn’t a lack of preparation. But it’s not correlating over to the results you want, so you have to look at what you are doing and how you are doing it and figure out a better way to do it.”

The Irish offense couldn’t get much going against a Stanford defense that entered the game 111th in scoring defense, giving up 32.6 points a game. Freeman said the Irish weren't surprised by anything the Cardinal were doing.

“I need to make sure we look at ourselves and say, ‘What aren’t we doing,’ ” he said. “The game plan is to run the ball and try to capitalize off of the aggressiveness of their defense and try to take some shots.”

Notre Dame scored touchdowns on back-to-back possessions in the second half, but fumbled the ball away on their next possession.

Stanford scored its lone touchdown on its first possession, driving 66 yards in eight plays, capped by a 2-yard run by Filkins. Karty then kicked field goals of 45, 43 and 43 yards.

“This is far from the end product," McKee said. "We have to keep on getting better and use this as a stepping stone.”

Pyne was 13-of-27 passing for 151 yards for the Irish with a fumble. He threw a 41-yard touchdown pass to Tobias Merriweather and Audric Estime had a 10-yard scoring run as Notre Dame overcame a 13-0 deficit to take a 14-13 lead, but couldn’t hold on.

Pyne took the blame for an inconsistent performance.

It appeared the Irish might have a short field to work with when officials ruled McKee had fumbled, but the call was overturned when replay showed his knee was down. The Cardinal took a 16-14 lead on a 43-yard field goal by Karty with 10:20 left.

The Irish were driving on their next possession, but Estime fumbled at the Stanford 25-yard line on a hit by Kendall Williamson and Jonathan McGill recovered at the 21.

Edge rusher Stephen Herron had a big sack of Pyne on second-and-4 on the closing drive.

“I was trying to just get out of the pocket and create something. The guy dragged me down,” Pyne said. “You can't take a sack in a two-minute operation.”

Notre Dame hasn’t scored a touchdown in the first quarter in six games this season and has been outscored 27-6. ... Stanford ended a three-game losing streak to the Irish to claim the Legends Trophy. David Shaw improved to 6-5 against the Irish. ... Notre Dame had just 106 yards of total offense in the first half.

“The first half, defense played so well, best half of football we’ve played all year,” Shaw said. “Not just kept them out of the end zone, not just a shutout, but getting off the field on third downs, getting in the quarterback’s face, getting pressure on the quarterback, rallying in the running game.”

Stanford: The Cardinal, who suffered a crushing last-minute defeat against Oregon State a week ago after leading 24-10 heading into the fourth quarter, struggled, but managed to hold on.

Notre Dame:: The Irish couldn't execute when they needed and repeatedly let Stanford get extra yards.