Stoops: Rodriguez will return for No. 9 Kentucky on Oct. 1 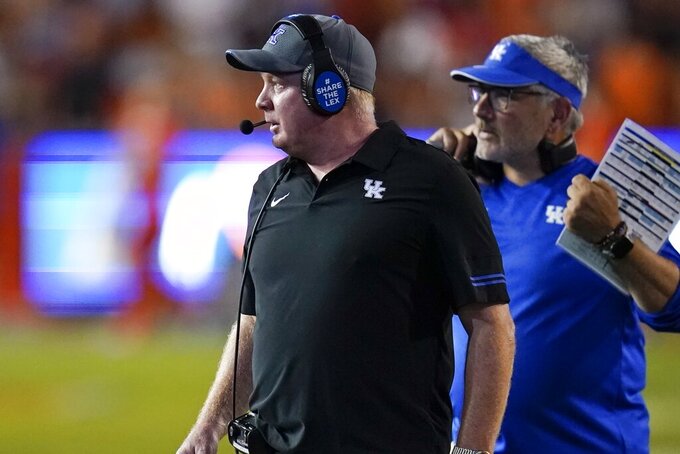 LEXINGTON, Ky. (AP) — Kentucky coach Mark Stoops said that leading rusher Chris Rodriguez Jr. will return from an unspecified absence on Oct. 1 for the No. 9 Wildcats’ Southeastern Conference matchup at No. 20 Mississippi.

Stoops announced Rodriguez’s return during Monday’s weekly news conference but did not state a reason for the running back’s absence that will keep him out for upcoming non-conference games against FCS Youngstown State on Saturday and Mid-American Conference member Northern Illinois.

Rodriguez pleaded guilty in July to driving under the influence, and discipline was expected, but Stoops has said only that the 1,300-yard rusher was “unavailable” but not suspended and did not specify how his status was being determined.

Pressed further on Monday, the 10th-year coach would not comment and added that Rodriguez “will be back at Ole Miss.”

Kentucky (2-0, 1-0 SEC) is coming off Saturday night’s 26-16 victory at then-No. 11 Florida, achieved despite failing to break 100 net yards rushing for the second consecutive week. At the same time, the Wildcats outgained the Gators 107-32 on the ground after halftime and averaged nearly five yards per carry to earn consecutive wins over the Gators for the first time since 1976-77.

And they’ll soon have a first-team, All-SEC selection who rushed for 1,379 yards and nine touchdowns last season.

“We’ve been prepared to handle the situation for weeks now,” Stoops said, adding that Rodriguez has worked with the scout team while taking practice reps with the first and second teams.

“We’ve been getting the other guys ready, continuing to progress and also keep him in shape. ... We will be more than happy to welcome him back and have him compete when he can.”

By Gary B. Graves an hour ago
By Michael Marot 3 hrs ago
By Aaron Beard 5 hrs ago
5 hrs ago
By Hank Kurz Jr. 6 hrs ago