Syracuse QB Garrett Shrader on a roll for unbeaten Orange 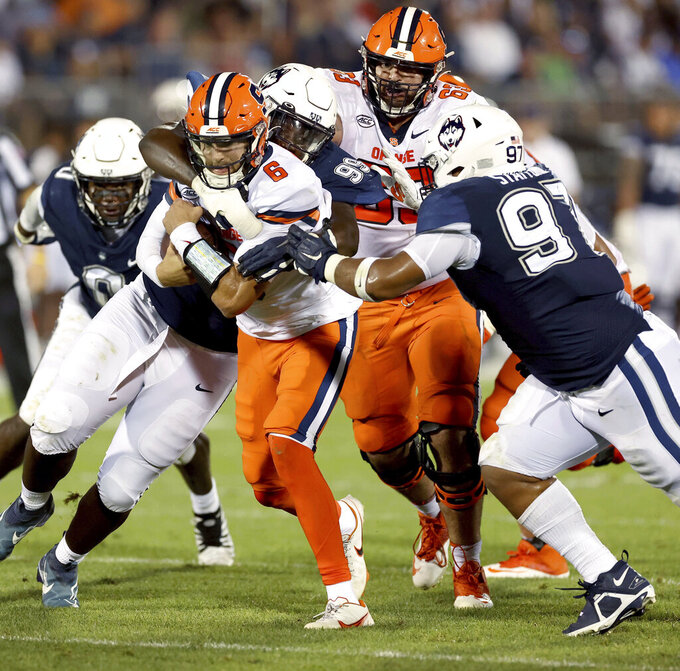 SYRACUSE, N.Y. (AP) — After Syracuse's lopsided season-opening victory over Atlantic Coast Conference rival Louisville, Orange quarterback Garrett Shrader — the bearded one who's as laid-back as any player in America — briefly fought his emotions on the podium following a stellar performance.

The transfer from Mississippi State is in a good place under coach Dino Babers and knows it.

“Coach Babers, I'm really thankful for him, just the opportunity to be here. He knows it wasn't easy," Shrader said, his voice cracking ever-so-slightly, “especially talking about last year. But I think it's going to play out well."

When Shrader arrived at Syracuse, Tommy DeVito was the starter, but in Game 4 last season Babers decided that the 6-foot-4, 230-pound Shrader, an imposing dual threat and master of the fake, was the right man for the job. Shrader finished what ended as a disappointing 5-7 season, and when DeVito transferred to Illinois, the starting job was Shrader's to lose.

Orange linebacker Mikel Jones said that was a big deal.

“I know for a fact that made a huge difference," Jones said. "He got all the time in the world this offseason to work on building relationships with those guys (on offense) to be more comfortable in the new offensive system.”

So far, so good as the Orange prepare for a home game against Purdue (1-1) on Saturday.

Shrader has delivered two impressive performances for the Orange (2-0) — a 31-7 victory over Louisville and a 48-14 triumph last week at UConn. He ranks third nationally in completion percentage at 79.2% (38 of 48), is fourth in the Bowl Subdivision with a pass efficiency of 205.24, and his 10.92 yards per pass attempt is fifth-best nationally. He’s also averaging 324 yards offensively and is tied for ninth in points responsible for with 48 — three rushing TDs and five passing — with zero turnovers.

“In terms of statistics, yes (the win over Louisville) was (a breakthrough)," Shrader said. "After seven months in this offense it’s kind of what we expected to do. You have that kind of hesitation and doubt — you don’t know how it’s going to go — but once I hit that first pass I was good to go.”

Syracuse has two main offensive threats in Shrader and record-setting tailback Sean Tucker, and they put up impressive rushing numbers last season. Tucker set a school record with 1,496 yards and Shrader chipped in with 781, but entering the final three games of the season, Syracuse needed just one victory to qualify for a bowl game and instead lost all three decisively, prompting a staff overhaul.

Shrader finished the year 123 of 234 passing for just 1,445 yards and nine touchdowns with four interceptions. Displaying newfound proficiency this season — he's 38 of 48, most of them short to mid-range throws with a few long ones mixed in, and Tucker is still the go-to guy. He's rushed for 100 yards in both games and leads the team with 10 receptions for 101 yards, nearly half of those coming on a 55-yard, catch-and-run touchdown in the opener.

Shrader has completed passes to a dozen players as Babers waits for somebody to emerge to complement Tucker, who is the focus of the attack with his power and sprinter's speed.

Shrader, who's been sacked five times, again is second on the team with 118 yards rushing and more than once his helmet has flown off while trying for that extra yard. It's part of who he is.

“You have to take the good with the bad," Babers said. “You can’t get upset when he tries to make a play and he doesn’t get away. You can’t get frustrated. Over the long haul it’s going to pay dividends. He’s an action guy and you want to follow his lead.”

Shrader was 20 of 23 throwing and responsible for five touchdowns against Connecticut, his 292 yards passing a career high. The performance will land him on the watch list for the Davey O’Brien Award, an honor given to the nation’s most outstanding quarterback.

That surely puts Mississippi State far in the rearview mirror.

“It’s been a great rebirth for him," defensive back Garrett Williams said. "To be able to come here and to work as hard as he has, getting the chance to be the starter and really now be the outright guy on our team, everything’s starting to come full circle for him.”