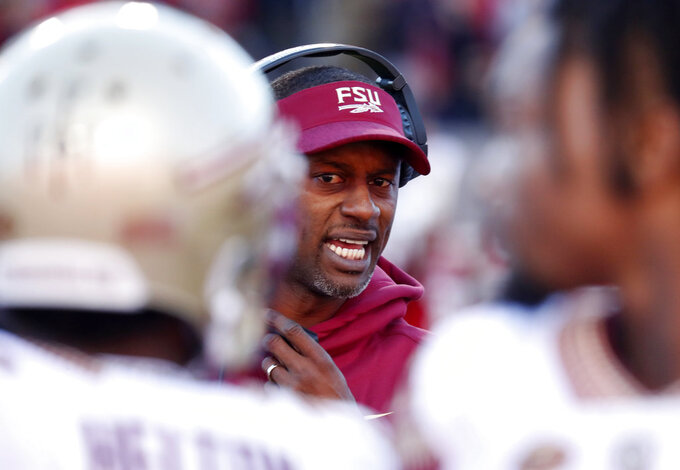 TALLAHASSEE, Fla. (AP) — Florida State needed to shake things up so Willie Taggart has turned over the play-calling duties to his offensive coordinator.

Taggart said "he's not a big ego guy" and after a rocky start in his first season as the Seminoles (4-5, 2-5 Atlantic Coast Conference) head coach, he opted to let offensive coordinator Walt Bell call plays in the 47-28 loss at North Carolina State. Despite losing, Bell will call the shots against this week against third-ranked Notre Dame (9-0, No. 4 CFP).

"I thought Walt did a good job of calling plays," Taggart said. "Obviously, we didn't get the win but I thought him doing that was good, and allowing me to see and be a part of other things within our program. I thought I was able to interact with our players a lot better, a lot more on the sidelines when I needed to."

Florida State is 106th in the FBS in scoring (23.8 points), struggling behind an injury-depleted and inconsistent offensive line. The Seminoles have allowed 28 sacks (117th) and the run game has been woeful, averaging just 76.9 yards per game (128th).

Bell could provide a needed change-up. He is considered a rising star in the coaching profession because of his dynamic offenses as a play-caller at Arkansas State (2014-15) and Maryland (2016-17). Taggart and Bell had no prior friendship before he was brought to Florida State but the two coaches favor fast-paced, spread offenses.

Quarterback James Blackman made his first start of the season against the Wolfpack, filling in for injured starter Deondre Francois (ribs). Blackman completed 29 of 46 passes while setting career-highs for passing yards (421) and touchdown passes (four).

The sophomore was accurate in connecting on 19 of 24 passes through the first three quarters but wasn't able to help the Seminoles rally from a 37-21 deficit in the final quarter.

Taggart said he has not decided if Blackman or Francois will start at Notre Dame.

"We'll go through the week and see how Deondre is doing, see how these guys are practicing throughout the week," Taggart said. "We'll make that decision later in the week."

Florida State also could be without two of its top offensive linemen. Tackle Landon Dickerson, who has been limited to just two games in 2018 due to an ankle injury, is not ready to return to practice, Taggart said. Guard Cole Minshew (neck stinger) also remains day-to-day.