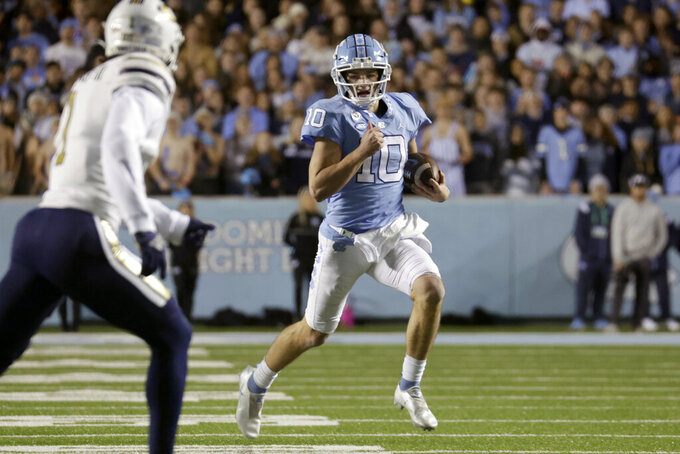 Things to watch during Week 13 in the Atlantic Coast Conference:

The Tar Heels had already clinched the ACC Coastal Division title when they lost to Georgia Tech last week, and facing the Wolfpack might keep them focused on the game at hand. N.C. State, which has climbed as high as No. 10 in the AP Top 25, is led by its defense, which is tied for 15th nationally and is allowing just 18.7 points per game. The Tar Heels are tied for eighth nationally in offense, averaging 492.7 yards behind redshirt freshman QB Drake Maye.

The Demon Deacons ended a three-game skid that knocked them from the Top 25 with a 45-35 victory over Syracuse, while the Blue Devils had a three-game winning streak snapped in a 28-26 loss to Pittsburgh. Both teams feature dynamic QBs. Wake's Sam Hartman ranks sixth nationally with 32 TD passes and Duke's Riley Leonard does damage through the air (16 TD passes) and on the ground (11 TDs).

Georgia Tech has rallied nicely under interim coach Brent Key, winning four of seven games, including road wins against two ranked teams (then-No. 24 Pittsburgh and last week against No. 18 North Carolina). But the Yellow Jackets have not faced an opponent like their rival, No. 1 Georgia. The defending national champion Bulldogs beat Georgia Tech 45-0 last year in Atlanta.

Nine ACC teams are bowl eligible, and two more, Georgia Tech and Miami, need one more win to get there. The Hurricanes are home against Pittsburgh. Georgia Tech would have to pull off a shocker against Georgia.