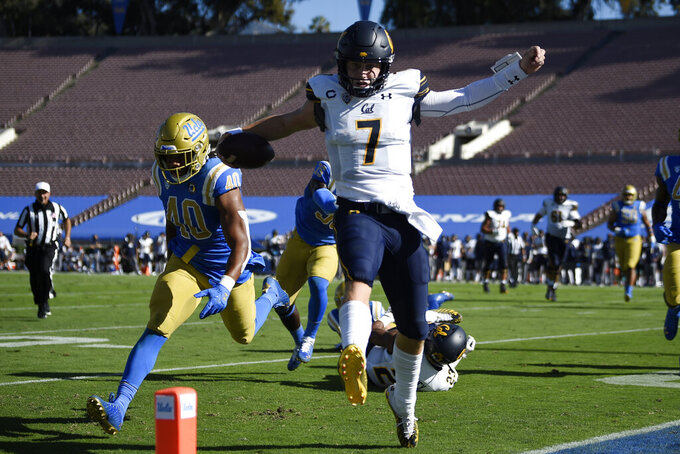 California quarterback Chase Garbers, center, runs in for a touchdown during the first half of an NCAA college football game against UCLA in Los Angeles, Sunday, Nov. 15, 2020. (AP Photo/Kelvin Kuo) 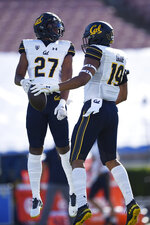 PASADENA, Calif. (AP) — UCLA's Dorian Thompson-Robinson was hoping to celebrate his 21st birthday with a big game against Utah. That game was canceled but he got a belated birthday present on Sunday morning.

The junior threw three touchdown passes, rushed for another TD and accounted for 248 yards of total offense as the Bruins rolled to a 34-10 victory over California at the Rose Bowl.

“It feels great to get a win. We’ve been fighting for it for a long time,” said Thompson-Robinson, who completed 14 of 26 passes for 196 yards and added 52 yards rushing. “The biggest thing is we kind of treated it like backyard football — wake up in the morning, go out and play ball.”

The Bruins and Golden Bears weren't originally slated to face each other this season, but the conference scheduled the contest on Friday after Cal’s game against Arizona State and UCLA’s matchup against Utah were canceled due to the Sun Devils and Utes having several positive COVID-19 tests.

The Sunday morning time slot was available because the Cal-Arizona State game was pushed back from Saturday before it was called off. Cal was playing its season opener after its Nov. 7 game against Washington was canceled following one positive COVID-19 test and subsequent contact tracing.

Coach Chip Kelly said the short timeframe resembled preparing for an NFL Thursday night game from his days with Philadelphia and San Francisco.

“The one thing (Cal coach) Justin (Wilcox) felt the same way about is we both had the same amount of time to prepare,” Kelly said.

The Bruins (1-1) got off to a slow start and trailed 3-0 before taking control. UCLA had a punt blocked and Thompson-Robinson threw an interception before he directed touchdown drives on four of the Bruins' last five possessions in the first half. UCLA led 27-10 at halftime.

Thompson-Robinson's 2-yard run around right end on fourth-and-goal with 58 seconds remaining in the first quarter gave the Bruins a 7-3 advantage. The junior's three TD passes in the second quarter went to Charles Njoku, Chase Cota and Kyle Phillips.

Thompson-Robinson has thrown three or more TD passes in consecutive games for the first time in his career.

The Bruins also had a solid day on the ground, rushing for 244 yards and averaging 4.5 yards per carry. Demetric Felton had 107 yards on 25 carries for the second 100-yard game of his career. Brittain Brown added 12 carries for 71 yards, including a 31-yard touchdown in the fourth quarter.

Cal (0-1) had a seven-game winning streak snapped where Chase Garbers has played more than half the game. The junior was 18 of 33 for 122 yards and was under pressure for most of the day as he was sacked five times.

“I’m sure Chase would like to have some plays back and so would the left guard and the right defensive end, the fullbacks and the L4 on kickoff," Wilcox said. "There’s going to be a lot of those, certainly the quarterback gets a lot of attention. Chase has done some really good things for us in the past and I think he’ll learn from this game and play even better in the future.”

The Golden Bears' best drive was in the second quarter when they went 75 yards in 12 plays, culminating in Garbers' 8-yard run to bring them within 14-10.

Cal: Garbers insisted he felt comfortable in the new offense under first-year coordinator Bill Musgrave, which is more of a pro-style attack.

“We haven’t played a football game in about a year. We haven’t played anyone but ourselves in a real, live game scenario, live tempo, tackling, everything, in about a year. So there are obviously going to be some hurdles there," Garbers said. "Flat-out offensively, both sides of the ball, we didn’t play to what we expected to and first game in a COVID season, some of those hurdles are expected.”

UCLA: The Bruins' defense had its best game in Kelly's three-year tenure. UCLA forced the Bears to go three-and-out on five of their 12 possessions, had nine tackles for loss and held Cal to 4 of 14 on third-down conversions.

UCLA: Goes to Oregon on Saturday. The game was originally scheduled for Friday but was pushed back to give the Bruins additional time to prepare.