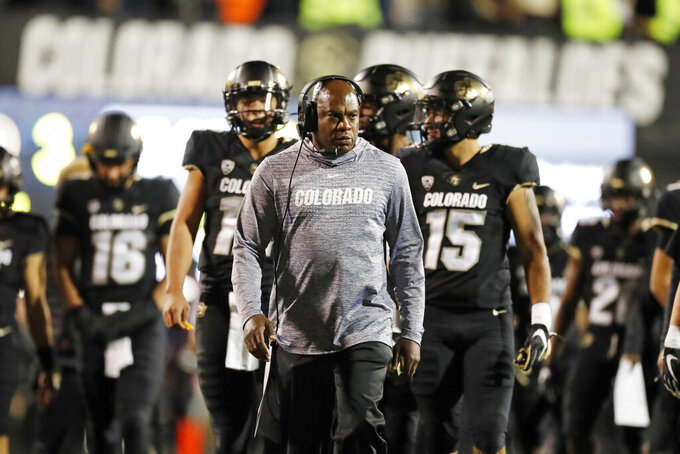 FILE - In this Oct. 25, 2019, file photo, Colorado head coach Mel Tucker watches during the first half of an NCAA college football game in Boulder, Colo. Colorado coach Mel Tucker said he's still committed to the Buffaloes, even after the Michigan State job opened earlier in the week. Michigan State's job came open when Mark Dantonio announced his retirement Tuesday. Tucker was a graduate assistant for the Spartans under Nick Saban in the late 1990s. (AP Photo/David Zalubowski, File)

Tucker said on his Twitter account that although he was flattered to be considered for Michigan State, he is committed to Colorado for the build of the program.

Michigan State's job came open when Mark Dantonio announced his retirement Tuesday. Tucker was a graduate assistant for the Spartans under Nick Saban in the late 1990s.

“Mel has turned heads here with the culture he’s quickly building and recruiting success he’s had, so it’s only natural that programs looking for a coach are going to be taking note," George said. "I know he’s committed to the Buffs all the way and we’re committed to supporting the vision he has for our program and winning championships. I’ve said plenty of times that we couldn’t be more excited that Mel is our head coach.”

Pittsburgh coach Pat Narduzzi, who was previously a defensive coordinator for Dantonio at Michigan State, has downplayed the possibility of going back to the Spartans.