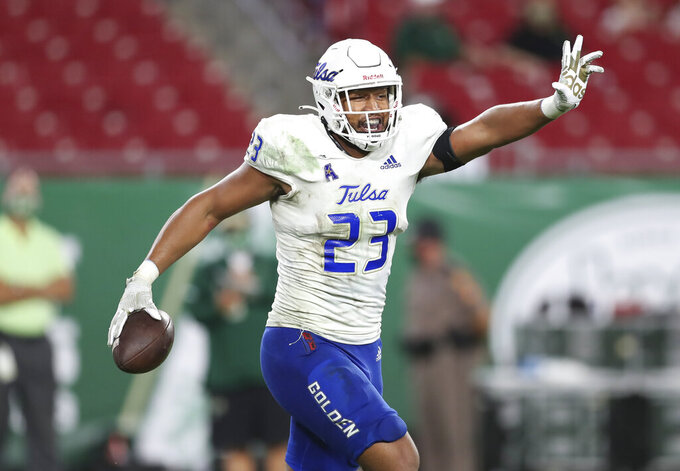 FILE - Tulsa linebacker Zaven Collins (23) celebrates after scoring a touchdown during an NCAA football game in Tampa, Fla., in this Oct. 23, 2020, file photo. Zaven Collins is a small-town player with big-time talent. He was overlooked after a stellar high school career in Hominy, Okla., a town with about 3,500 people. He’s got the nation’s attention now -- the 6-foot-4, 260-pound linebacker is a finalist for the Butkus and Nagurski Awards. (AP Photo/Mark LoMoglio, File)

Tulsa linebacker Zaven Collins refuses to let being one of the breakout stars in college football change him.

Collins played for Hominy High School in Hominy, Oklahoma -- a town with about 3,500 people located 45 miles northwest of downtown Tulsa. He wasn’t highly recruited, but now, he’s a finalist for the Butkus Award, which honors the nation’s best linebacker. He’s one of the main reasons No. 20 Tulsa will play No. 6 Cincinnati for the American Athletic Conference championship on Saturday.

Even with all the attention, Collins embraces just being a small-town guy. It's not unusual to see him back at his high school or attending local events in Hominy when he can.

Hominy hosts a junior high football scramble each year - a six-team round robin event that kicks off the season. Hominy High coach Caleb Christian prepares hot dogs in the school’s field house for the event. Collins shows up early in the morning to cook with him, even putting the hot dogs in buns and bagging them up.

Christian said some athletes who move on don't do those sorts of things.

“Sometimes, guys get a little big headed or don’t come around, or if they do come around, they’re kind of, ‘I want everybody to look at me,’” Christian said. “He’s definitely the opposite.”

It’s all really simple for Collins -- a young man who loves deer hunting and, back in his high school days, would only miss workouts for church events.

“I’m from a little small town in northeast Oklahoma,” he said. “I think if I changed, it would be just wrong. Everybody knows everyone (in Hominy). It’s not like people didn’t know me before. They knew me when I was in eighth grade, going through high school. I love being from there.”

He hasn’t changed, but his future plans have. The mobile 6-foot-4, 260-pounder is on the NFL’s radar after a season filled with game-changing plays. Against SMU, he intercepted a pass with 1:29 remaining to seal the victory. Against Tulane, he returned an interception 96 yards for the game-winning touchdown in the second overtime.

“Unbelievable kid, unbelievable teammate, great leader,” Tulsa coach Philip Montgomery said after the Tulane game. “Why is that guy not in the running for the Heisman? Tell me someone that has affected more games than that guy. I mean, if we want to talk about the best football players in college football, in my opinion, he’s there.”

Being overlooked falls in line with the rest of Collins’ journey. He was an All-State player for Hominy High who dominated as a dual-threat quarterback and free safety. As a senior in 2016, he rushed for 1,520 yards and 27 touchdowns and passed for 1,600 yards and 23 scores to lead the Bucks to the Class A state title.

He had enough endurance to anchor the track team's 1,600-meter relay team while weighing 220 pounds. Beyond the physical skills, Collins was a gym rat who studied the game and asked questions. He was a good student -- he has followed the exercise and sports science/pre-med track in college.

But the big offers escaped him.

“At the time, the coaches were straight up honest with me,” Collins said. “They said they didn’t know what my level of competition was in high school because I went to a small school. They didn’t know if I was going to be fast enough, this and that. A lot of it was just smoke and mirrors. It was just fake stuff they were telling me just because they didn’t want to take a chance.”

He’s been making coaches wish they had ever since.

“He’s a guy that’s always stepped up in big games,” Montgomery said. “Every game’s a big game to him. He’s a guy that brings so much to the table every week. Teams are trying to figure out ways around him, by him, through him, over him and at least try to minimize the damage that he can do.”

Collins focused on adding weight when he arrived at Tulsa. His development surprised the training staff.

Still, he gets the same kind of criticism he heard in high school -- that because he doesn't play for a big school, it’s unclear how good he really is. Despite that, he’s thankful he chose to play for Tulsa and stay close to home.

“I love it here,” he said. “I love the coaches, I love all my teammates. They’re great guys, we have a tight-knit team. I can call anyone on the team, they’d be here in five minutes to help me out. I think that’s really awesome.”

By Greg Beacham 24 minutes ago
By Ralph D. Russo 3 hrs ago
By Andrew Welsh-Huggins 7 hrs ago
By The Associated Press 9 hrs ago
16 hrs ago