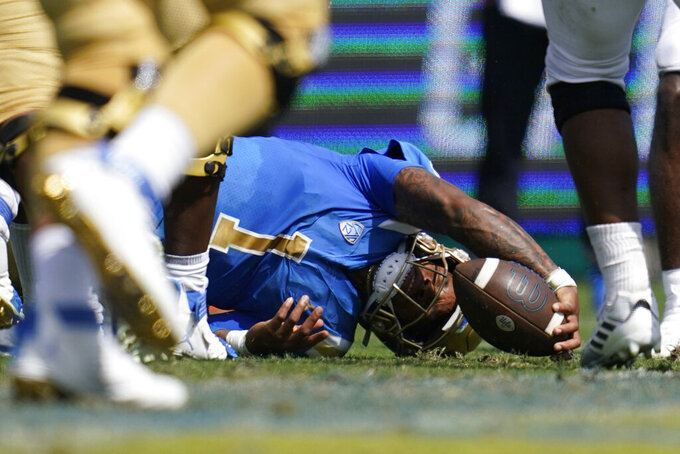 Line: UCLA by 21 1/2 points, according to FanDuel Sportsbook.

UCLA has won six straight games since last season heading into its road game in Boulder to start Pac-12 play. The Bruins haven’t won more than six straight games since they opened 8-0 in 2005. The Buffaloes may be playing to save third-year coach Karl Dorrell’s job. CU athletic director Rick George issued a statement to quell the fan base after a 49-7 loss at Minnesota. “I recognize and understand your disappointment and frustration and perhaps, even anger," he said. "We have not come close to meeting our expectations this season and we own that.” The Buffaloes have been outscored 128-30 and are trying to avoid their first 0-4 start since 2006.

The Buffaloes are giving up 452 total yards per game, which ranks 119th in the nation. The Bruins have a veteran quarterback in Dorian Thompson-Robinson, who’s 11th in the nation in completion percentage. Thompson-Robinson is set to make his 39th career start in Boulder. He trails only Brett Hundley (40) and Cade McNown (44) in career starts for a Bruins quarterback.

UCLA: RB Zach Charbonnet, who tied his career-high with three rushing touchdowns last season against Colrado. The Buffaloes are allowing an FBS-high 348 yards rushing a game.

Colorado: Freshman TB Charlie Offerdahl rushed for 55 yards in the loss to Minnesota. It was the third-most yards gained from a walk-on in program history. His 70 yards this season are already the fourth-most for a single season by a walk-on in school history.

The last time the Bruins won in Boulder was 2014, when Hundley orchestrated a 40-37 two-overtime victory. ... UCLA begins Pac-12 play on the road for the 10th time in the 12 seasons since the conference was expanded. ... Thompson-Robinson and the Bruins offense are 16th in the nation in total offense (506 yards per game). ... WR Kazmeir Allen, who had 17 catches last season, already has 16 for 122 yards and a score. ... There will be a ceremony honoring the late Rashaan Salaam, who will be inducted into the College Football Hall of Fame in December. Salaam won the 1994 Heisman Trophy when he ran for 2,055 yards. ... Colorado is 5-6 in Pac-12 openers. ... Freshman QB Owen McCown could see some playing time for CU with Brendon Lewis and J.T. Shrout struggling to ignite the offense. McCown went 4 of 7 for 52 yards to close out the Minnesota loss last weekend.