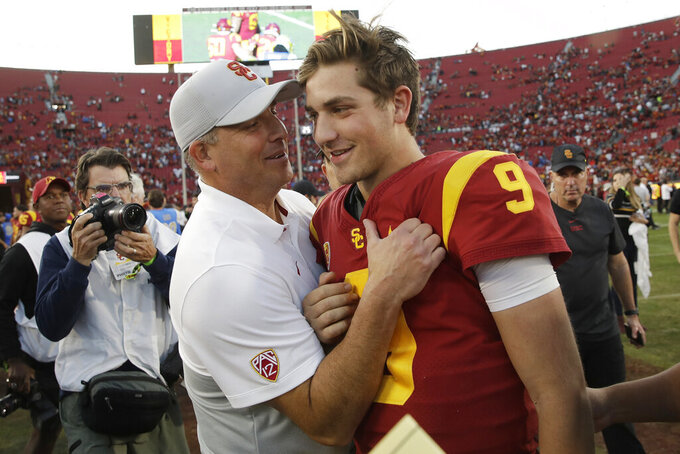 And it's not just because the unassuming quarterback who took the Pac-12 by storm last year is a whole lot harder to miss now with his extra 15 pounds of muscle.

“He went from a young man to a grown man in a year,” USC coach Clay Helton said with a smile.

Slovis is becoming more than the unheralded teenager who produced the best season by a freshman quarterback in USC's voluminous history last fall. When the No. 20 Trojans finally begin their regular season Saturday morning at the Coliseum against Arizona State, Slovis carries both the weight of his responsibilities and the heavy expectations that gather on this program's best players.

“We just want to give our guys the opportunity to make plays, and it starts with me,” Slovis said. “That's really the most I can do at this point, and what I'm focused on.”

Slovis projects a calm belying his 18 years, but he spent the extra-long offseason lifting weights, eating well, poring over video and assuming a greater leadership role. All kinds of tangible growth has happened since his impressive debut season ended with an injury in the Trojans’ loss to Iowa in the Holiday Bowl, according to the coaches most responsible for guiding his journey.

“The biggest advantage is he has a year under his belt now,” USC offensive coordinator Graham Harrell said. “I think that he feels more comfortable checking routes and protecting plays than he probably did last year. You know, if he sees something, he feels more comfortable attacking it. ... I (also) think now, after a year of being the guy, I think the team sees him in a different light, and I think that’ll help.”

The difference in Slovis' arm skills is already coming out in practice, where the sophomore is regularly frustrating the elite talent on the Trojans' defense.

“He’s really an NFL quarterback playing college football right now,” USC starting cornerback Olaijah Griffin said. “There will be plays where I’ll make a good play, break on the ball, and he just fits it in the spot where I just can’t reach, even though I’m doing everything correct.”

For a freshman who got on the field only because JT Daniels injured his knee in the season opener, Slovis put up stunning numbers last season: 3,505 yards passing with 30 touchdowns and nine interceptions in 11 games at the helm of Harrell's version of the Air Raid offense.

Slovis was the Pac-12's offensive freshman of the year after posting the highest completion percentage (71.9) by a freshman in NCAA history. It was also the highest ever by a USC quarterback or a Pac-12 passer, topping the marks set by Cody Kessler and Stanford’s Andrew Luck, respectively.

That difference sometimes shows up in the offense's tempo, which is supposed to be as fast as possible in most situations. Harrell saw Slovis picking up that crucial confidence late last season in the Trojans' 52-35 win over archrival UCLA.

“The first drive or two, Kedon is moving at the pace of a snail, it seems like, and his body language (stinks),” Harrell said. “And then we see him kind of get a little bounce to him. The offense starts to get lined up a little faster. We start playing at a little faster rate, and I don’t know if we got stopped the rest of the night.”

The USC offense put up 455.4 yards per game and averaged 32.5 points last season, and improvement on those numbers will be tough but not impossible. Slovis has an enviable selection of receivers, including Amon-Ra St. Brown and Tyler Vaughns, along with four scholarship tailbacks.

Any quarterback is dependent on his line, and USC’s group could be excellent. Probable left tackle Alijah Vera-Tucker leads three returning starters — or four with the inclusion of Andrew Vorhees, who started 20 games in 2017-18 before redshirting last season with an ankle injury.

Despite his uncommon accuracy, Slovis also threw nine interceptions last year, including a combined six in USC's losses to Oregon and BYU. He has worked extensively on learning how to avoid the decisions that led to those mistakes, studying defenses for their tendencies and tricks so he’ll recognize them this time around.

“The games where I didn’t turn the ball over, we ended up winning it,” Slovis said. “And the games we did lose was probably because of turning the ball over too much.”