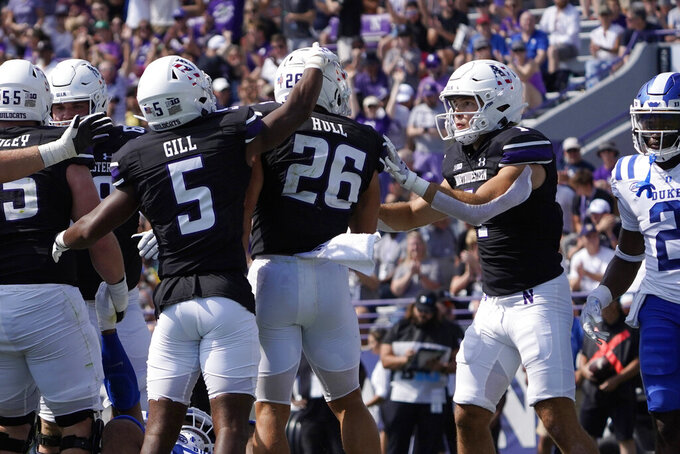 Northwestern running back Evan Hull (26) celebrates his touchdown against Duke during the first half of an NCAA college football game, Saturday, Sept.10, 2022, in Evanston, Ill. (AP Photo/David Banks)

EVANSTON, Ill. (AP) — Jordan Waters had a pair of touchdowns on the ground, Riley Leonard threw for a score and Duke beat Northwestern 31-23 on Saturday.

Leonard, who was 13 of 24 for 240 yards and an interception, found Jordan Moore with a short scoring pass early in the fourth quarter to give Duke a 28-16 lead and Brandon Johnson had a late interception in Wildcat territory to set up a field goal with 1:18 remaining.

Johnson finished the game by pouncing on Evan Hull’s fumble with 12 seconds left.

“So many times you see that play turn into a touchdown because your guys don’t finish the play,” Duke coach Mike Elko said of the recovery in the end zone. “It’s just a credit to the effort our kids are playing with now.”

Waters rushed for a career-best 91 yards, including a 42-yard scoring run for the Blue Devils (2-0). Jaylen Coleman added 83 yards and a short touchdown run.

Hull caught 14 passes for a career-best 213 yards and a touchdown, and added 65 yards and a score on the ground for the Wildcats (1-1), who trailed 21-0 in the opening 16 minutes. Ryan Hilinski was 36 of 60 for a personal-high 435 yards with two scores and an interception.

“He probably doesn’t throw the ball 60 times if the game didn’t start out the way it did,” Wildcats coach Pat Fitzgerald said. “Our guys had great resolve and kept battling, but to sum it up there was a lot of self-inflicted wounds.”

Northwestern got within 21-10 by halftime and twice cut the lead to five points in the second half.

Elko won his first road game with Duke despite being penalized seven times for 85 yards. Jalon Calhoun had six catches for 108 yards and Eli Pancol added two for 102.

“We were up and we were down,” Duke safety Darius Joiner said. “We just kept saying not to look at the scoreboard and keep playing.”

Duke: Elko wished his team would’ve built on the early 21-0 advantage, but his first road trip ended well. The Blue Devils watched Northwestern creep back into the game but the defense got stingy when it needed to and the offense shook off some bad luck and bad possessions to turn the game into a two-score affair in the fourth quarter. A 4-0 start before the Oct. 1 ACC opener against Virginia looks realistic.

Northwestern: The Wildcats bounced back from a rough first quarter but the defense came away looking even worse than it did in a season-opening win over Nebraska. The Blue Devils evenly split their 463 yards between the ground and air and averaged more than 8 yards per play. There’s a lot to shore up before an Oct. 1 Big Ten road trip to Penn State.

“We can’t allow that to continue to happen,” Fitzgerald said. “That’s a recipe for disaster in the long term.”

The Wildcats went for it on fourth-and-3 from the Duke 39 late in the third and cashed in when Hilinski found Hull with a short pass. Hull sailed down the sideline for a touchdown and a failed two-point try left the score 21-16.

Duke took the momentum right back on the ensuing possession; a long drive that ended with Leonard’s short scoring pass to Moore.

“Biggest drive of the game,” Elko said. “They had all the momentum going and that’s the time your guys have to answer back. That’s a critical four-point play we had to convert.”

Duke was facing third-and-6 from its own 14 on the final play of the first quarter when Leonard connected with a streaking Pancol for an 81-yard gain up the middle. It set the Blue Devils up for a 21-0 lead early in the second and ended an opening quarter that saw the visitors outgain Northwestern 237-76.