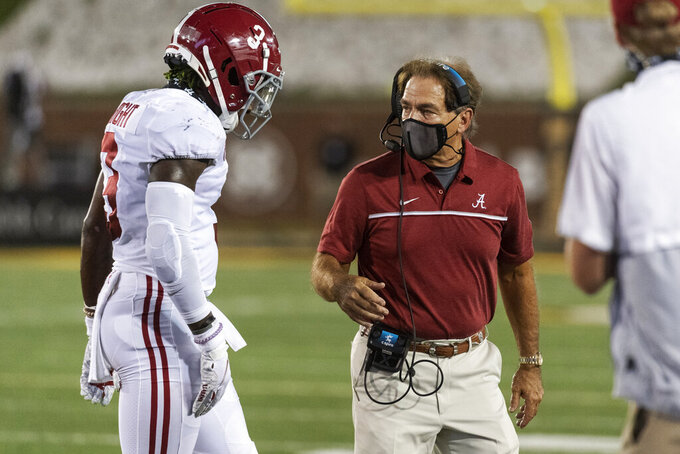 Alabama head coach Nick Saban, right, talks with Daniel Wright as he walks off the field during the second half of an NCAA college football game against Missouri, Saturday, Sept. 26, 2020, in Columbia, Mo. (AP Photo/L.G. Patterson)

Lane Kiffin gets the chance to snap one of the more interesting streaks in college football.

The new Mississippi coach faces his old boss, Nick Saban, when the Rebels take on No. 2 Alabama on Saturday in Oxford. Saban last week improved to 20-0 when facing teams led by one of his his former assistant coaches. The Crimson Tide hammered Jimbo Fisher's Texas A&M team.

Kiffin worked as offensive coordinator for Saban from 2014-2016, helping the Crimson Tide win a national title. Fittingly for a coach who has had a volatile career, Kiffin's time with the Tide ended the week before another national championship.

Despite the awkward departure, Kiffin had a little fun with Saban this week, telling the “Dan Patrick Show” he didn't think the “elderly” 68-year-old coach could cover him one-on-one,

"I guess what I would ask is, when he’s my age, what’s he going to do?” Saban told reporters. “I don’t know, it’s a little bit of a disadvantage to be my age and have had a hip replacement, but I still pride myself on my ability to cover. I just don’t think I can cover him.”

On the field, Alabama-Ole Miss has a chance to be a fun matchup between two high-scoring teams, with an interesting side story. It is hardly the marquee event on a schedule that includes four game matching ranked teams — two in the Southeastern Conference and two in the Atlantic Coast Conference.

Plus, a Red River Showdown heavy on desperation.

There are sexier games on the schedule, most notably No. 7 Miami at No. 1 Clemson, but Hokies-Heels is probably the best bet to provide four quarters of competitive football.

The Tar Heels are trying to start 3-0 for the first time since 2011. The Hokies are 2-0, despite playing each of their games with a thin roster because of COVID-19 issues. Virginia Tech has yet to have quarterback Hendon Hooker or defensive coordinator Justin Hamilton participate on game day, and last week beat Duke without its top four cornerbacks.

That would be less than ideal against North Carolina quarterback Sam Howell and talented receivers Dyami Brown and Dazz Newsome.

Virginia Tech running back Khalil Herbert, a transfer from Kansas, is coming off a school record 357 all-purpose yards against Duke.

Miami quarterback D'Eriq King is the pick here for the second time in three weeks, but this time it's serious.

The Hurricanes will try to prove themselves worthy Atlantic Coast Conference contenders against the league's five-time champion, Clemson.

King has completed 67 percent of his passes and accounted for seven touchdowns without an interception in an offense that can highlight his arm or his legs.

If the senior King can lead Miami to an upset against the No. 1 team in the country — and against Tigers quarterback Trevor Lawrence, the presumptive Heisman favorite — it could vault him to the top of the leaderboards.

0-3 — Oklahoma has lost two straight games and goes into its game against Texas trying to avoid starting 0-3 in the Big 12 for the first time since 1998. The Longhorns also lost last week, making this the first Red River Showdown with both teams coming off a loss since 2014.

29.25 — Yards per reception for Kansas State running back Deuce Vaughn. Yes, running back. The 5-foot-5, 168-pound freshman has eight catches for 234 yards. The Wildcats play at TCU.

371.4 — No. 15 BYU's yardage differential through three games, best in the nation by far. The Cougars have played the best competition, but they led the nation in total offense (585.7) and total defense (214.3). BYU hosts UTSA on Saturday.

Houston has gotten a lot of attention for starting its season so late because of three games being called off due to opponents' COVID-19 problems.

With less attention, the Owls still have not played a game either. Temple delayed the start of its season early in the ramp up to deal with COVID-19 restrictions in Pennsylvania.

The Owls finally kick off against a Navy team that has been blown out twice, sandwiched around a big comeback victory against Tulane.

A&M didn't put up much of a fight against No. 2 Alabama last week, but this seems like a more realistic measuring stick for Fisher's rebuild.

He is in season three of a 10-year contract. Florida's Dan Mullen is in season three with the Gators, who look like legit contenders in the SEC East. Expecting a signature victory of sorts for Fisher against Florida doesn't seem like too much to ask.