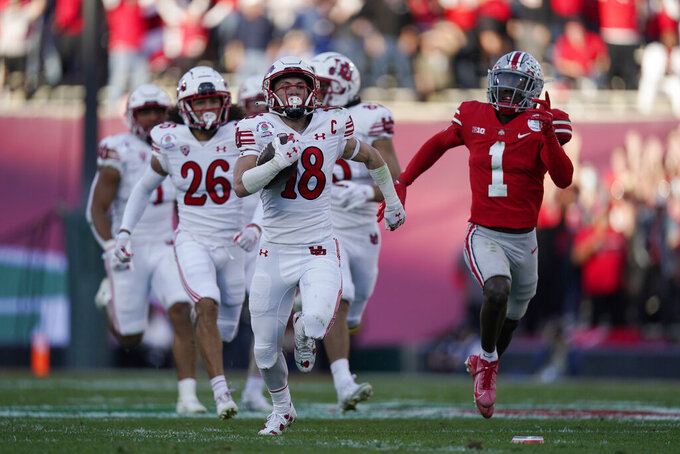 PASADENA, Calif. (AP) — Utah made sure its first trip to the Rose Bowl was memorable. Unfortunately for the Utes, they ran out of time to rally.

The 10th-ranked Utes led most of the way Saturday, but an injury to quarterback Cam Rising during the fourth quarter and an undermanned secondary proved too much to overcome as No. 7 Ohio State rallied for a 48-45 victory in the 108th edition of the Granddaddy Of Them All.

Despite squandering a 14-point halftime lead, coach Kyle Whittingham said his team had nothing to be ashamed of.

“They fought the entire 60 minutes and came up short,” Whittingham said. “They’ve got nothing to hang their heads about. It’s been a terrific season. Yeah, we’re all disappointed that we didn’t win the game this afternoon, but that’s how life goes.”

Utah (10-4) started 1-2 but won nine of its next 10 games to capture its first Pac-12 title and earn a trip to the Rose Bowl. All while players and staff mourned the deaths of teammates Ty Jordan and Aaron Lowe, who were killed nine months apart.

Utah faced plenty of adversity on the field Saturday. With three of its top cornerbacks out due to injuries, freshman Micah Bernard ended up playing both running back and cornerback. Bernard led the Utes with 10 tackles and had a 12-yard touchdown catch in the left corner of the end zone to give Utah a 14-0 lead in the first quarter.

However, Bernard and the rest of the Utah defense had a hard time stopping Ohio State's passing attack as C.J. Stroud threw for 573 yards and six touchdowns while Jaxon Smith-Nijgba had 15 receptions for 347 yards and three scores.

“I've been practicing on defense all week. I didn’t think I was going to have that many offensive reps, but I did what I needed to do,” Bernard said. “My body is at an all-time low. I'm not happy with the outcome but I'm happy with myself.”

Bryson Barnes came in midway through the fourth quarter after Rising hit his head hard on the turf while trying to elude a sack. The Utes went three-and-out on Barnes' first series, but the freshman quarterback directed a 57-yard TD drive in six plays on the next series, culminating in a 15-yard pass to Dalton Kincaid to tie it at 45 with 1:54 remaining.

Whittingham elected to kick the extra point instead of attempting a 2-point conversion because of Barnes' inexperience and the time left on the clock. Ohio State drove down the field and won it on a 19-yard field goal by Noah Ruggles with nine seconds remaining.

“I thought he did a great job of engineering that drive, got us to the end zone,” Whittingham said. “At some point, we have to play defense. We didn’t play very well all night long on defense. It wasn’t our usual. Not sure we’d be able to get a stop.”

Rising had 306 total yards. The sophomore completed 12 of 22 passes for 214 yards and a touchdown while also rushing for 92 yards, including a 62-yard scamper up the left sideline on fourth-and-1 when he broke a pair of tackles.

Britain Covey had two touchdowns, including a 97-yard kickoff return.

While Utah will be losing standouts Covey and linebacker Devin Lloyd, it returns most of its roster next season and will likely be favored to repeat as Pac-12 champion.

The Utes reached their goal of getting to the Rose Bowl, but winning it will be at the top of the list going into next season.

“We’re optimistic about the future. Can we repeat? I think it’s too early to talk about any of that right now," Whittingham said. "We do like the level of talent, particularly the young talent on this football team. Looking forward to working with them starting this winter.”