After-Kiffin era starts for FAU against SMU in Boca Bowl 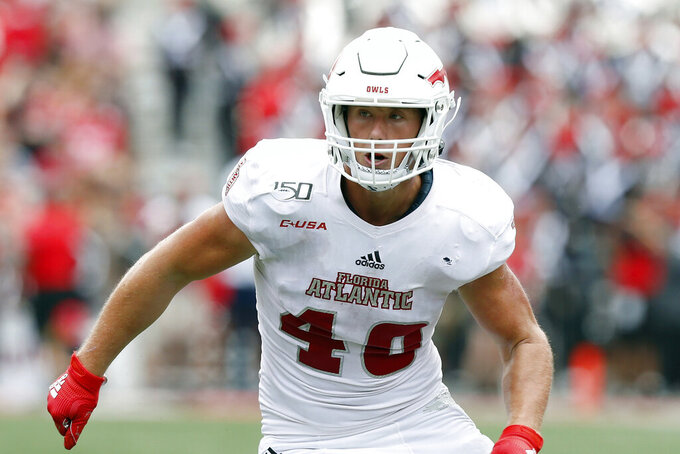 SMU could reach 11 wins for the first time since 1982, and FAU could match a school record with its 11th win — first reached in 2017, Lane Kiffin’s first season with the Owls. Kiffin is gone now, having departed for Ole Miss after FAU won the Conference USA title earlier this month. But the Owls still have a chance to improve to 4-0 all-time in bowl games and get to play this one on their home field. . This is one of just seven bowl games that feature two teams coming in with at least 10 wins. The others are the three College Football Playoff games along with the Cotton, Sugar and Rose bowls.

SMU RB Xavier Jones vs. FAU’s defensive front. The Mustangs play fast and can score from anywhere on the field, but everything seems to start with Jones — who has 21 rushing touchdowns this season. Containing him will relieve at least some of the pressure that will be on the FAU defense.

SMU: WR James Proche has 102 catches for 1,139 yards this season and, like Jones, will be entering his final college game. He enters as the NCAA’s active career leader in catches (292) and receiving yards (3,863).

FAU: TE Harrison Bryant was a unanimous All-American and is going to hear his name called at next year’s NFL draft. As such, there’s serious doubt that he will risk injury and play in the bowl game.

Glenn Spencer will coach FAU in the bowl game; new Owls coach Willie Taggart will be there, but observing and evaluating only. ... SMU is playing in its 17th bowl game, and first in the state of Florida. ... SMU safety Rodney Clemons, if he plays, will set a school record by appearing in a 54th game for the Mustangs. Clemons is a captain and one of the team’s unquestioned leaders. ... This is the sixth Boca Raton Bowl and the first five were all blowouts — decided by margins of 29, 15, 20, 47 and 24 points. FAU beat Akron 50-3 in this game two years ago. ... FAU led the country this season in turnover margin, with 31 takeaways opposed to 11 giveaways. ... These teams can score: SMU was sixth nationally at 43 points per game, FAU 16th nationally at 35.2 points per game.