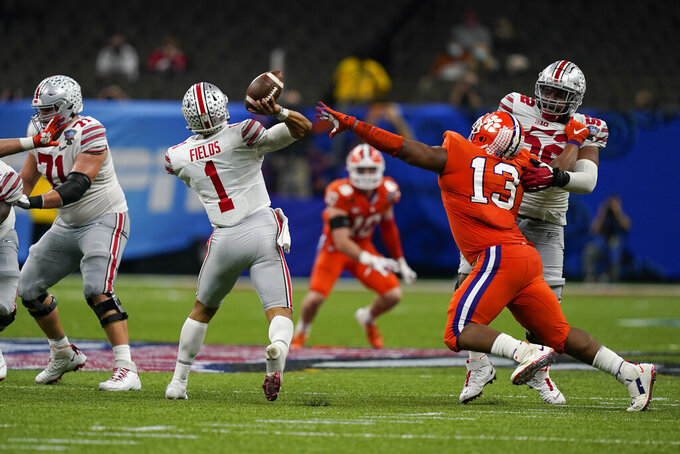 ARLINGTON, Texas (AP) — Top-ranked Alabama has two Heisman Trophy finalists and is in the College Football Playoff championship game for a record fifth time. Ohio State is back for the first time since winning the inaugural title in the CFP era.

After the SEC champion Crimson Tide rolled past Notre Dame 31-14 in a Rose Bowl played deep in the heart of Texas, the N o. 3 Buckeyes of the Big Ten beat Clemson 49-28 in the other CFP semifinal at the Sugar Bowl on Friday night. The Tigers were trying, like Alabama, to get to the title game for the fifth time in the seven seasons of the four-team playoff.

So it’s a matchup of storied programs playing Jan. 11 in suburban Miami to determine the champion of this most unusual season played in the middle of a pandemic.

They haven’t met since the first year of the CFP at the end of the 2014 regular season. Alabama was the top seed in that first four-team playoff, but Ohio State beat the Tide 42-35 in the semifinal Sugar Bowl. The Buckeyes went on to win the national title over Oregon that year, but had since lost twice to Clemson in the semifinals.

While this season’s CFP has provided a third consecutive title-game matchup of undefeated teams, this one is a little different.

Alabama has played 12 games, getting through a conference-only regular season before holding off Florida 52-46 in the SEC championship game and then winning the relocated Rose Bowl. That semifinal was moved from Pasadena because of COVID-19 restrictions in California that would have kept family — or any fans — from attending the game.

Ohio State’s overwhelming win in the Sugar Bowl was only its seventh game this season.

“We’re a great program. We have a lot of pride. Ohio State Buckeyes means something," coach Ryan Day said. “I don’t know how many games we had to play to get here. All we had to do is play and we had to win once. That’s really what mattered.”

The Buckeyes had three regular-season games canceled because of virus issues after the Big Ten didn’t start its season until late October. The league altered its rules to let them represent the East Division in the conference championship game after only five regular-season games, instead of the six that had been initially mandated.

This will be the fifth meeting overall between the Tide and Buckeyes, whose only win in the series was that CFP semifinal six seasons ago. Their first game was the Sugar Bowl on Jan. 2, 1978, a 35-6 Alabama win in a matchup of legendary coaches Bear Bryant and Woody Hayes.

Alabama will be going for its sixth national title in coach Nick Saban's 14th seasons, and third in the CFP era. The early lines had the Tide favored by a touchdown over Ohio State.

“I don’t know how it’s going to end, but I do know one thing, we’re going to go out there and play our butts off, play our hardest,” Ohio State quarterback Justin Fields said after throwing six for TDs in the Sugar Bowl.

“Smitty has done as much for our team as any player could do for any team,” Saban said.

The Heisman Trophy will be presented in a virtual ceremony on Tuesday night.

“Whatever happens, happens,” Smith said. “I mean, I’m looking forward to the next game.”

The Crimson Tide also have tailback Najee Harris, who had 125 yards rushing and a high-hurdle over a Notre Dame defender on an electric 53-yard run in the Sugar Bowl He didn't have a touchdown in that semifinal, but has 27 TDs (24 rushing, three receiving) this season.

Trey Sermon followed up his 331 yards rushing in the Big Ten title game with 193 yards against Clemson. He has three consecutive 100-yard games.