Amid turmoil, Diaz says Miami has to be focused on this week 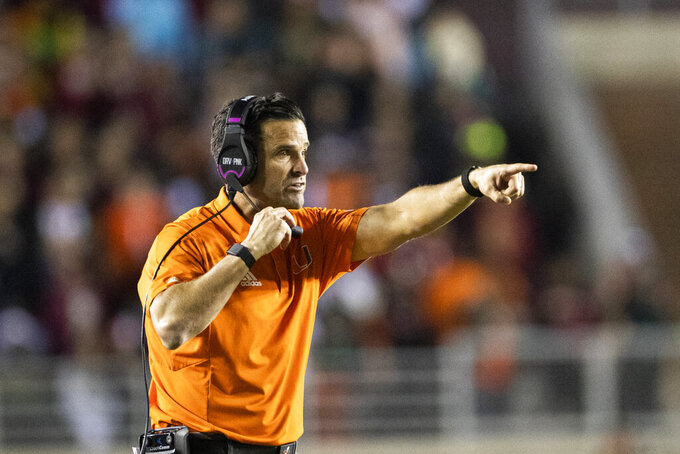 CORAL GABLES, Fla. (AP) — Manny Diaz’s long-term future at Miami is uncertain, given that the Hurricanes are in the process of hiring a new athletic director whose first task almost certainly will be deciding if the football program needs a change in direction.

That’s why the short-term matters are of primary importance to Diaz right now.

Speaking out for the first time since Miami ousted athletic director Blake James on Monday, Diaz expressed his appreciation for his former boss — who was integral in the decision to hire Diaz for the job in 2018.

“I thank Blake for the opportunity and I’m forever grateful for him,” said Diaz, who is 19-15 in his three seasons at Miami.

The Hurricanes (5-5, 3-3 Atlantic Coast Conference) play host to Virginia Tech (5-5, 3-3) on Saturday, with both sides needing one more win to become bowl eligible. The Hokies have an interim coach after Justin Fuente left Tuesday, while the Hurricanes have an interim athletic director in Jennifer Strawley and a coach in Diaz who knows that there are many Miami fans on social media clamoring for his ouster.

“There’s a mission and the mission this week is to beat Virginia Tech,” Diaz said. “That’s all we can control. I think because of that mentality our team has been pretty resilient over the course of the year.”

Miami is coming off a 31-28 loss to Florida State, a game in which the Hurricanes got themselves into a 17-0 hole early, then wasted an eight-point lead in the fourth quarter and gave up the winning touchdown with less than a minute remaining.

Diaz went to Florida State and one of his coaching icons is Bobby Bowden — who, as Diaz pointed out Wednesday, was hanged in effigy by fans at West Virginia during the Mountaineers' 4-7 season in 1974. Bowden went to Florida State two years later and is generally considered one of the best coaches in the history of the sport.

If Bowden can be shredded by fans, Diaz said, that means no coach can ever believe they're immune from criticism.