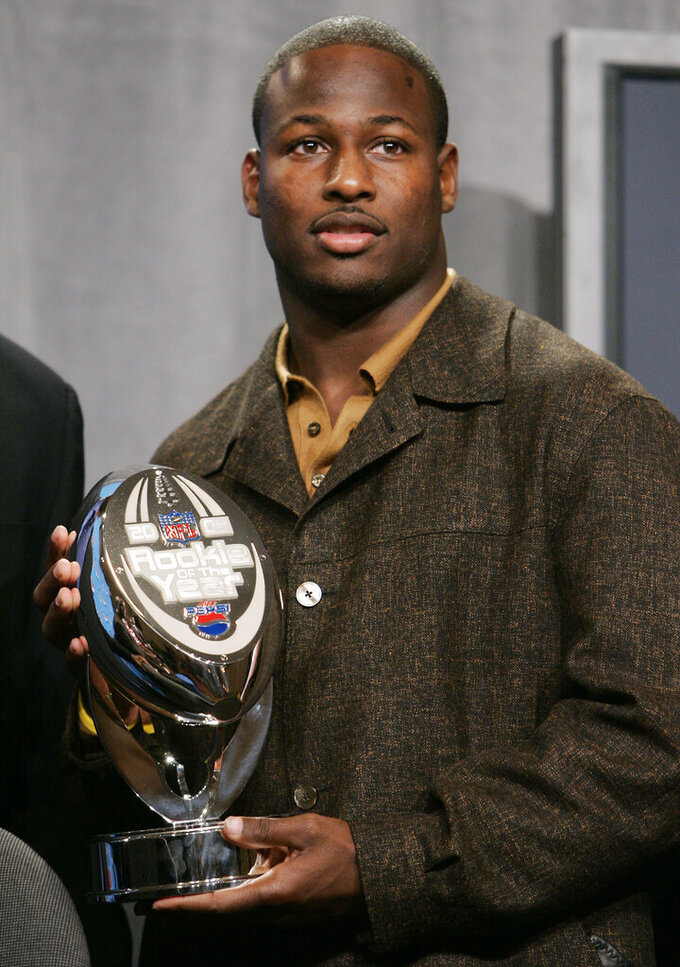 FILE - Tampa Bay Buccaneers running back Carnell "Cadillac" Williams holds his Rookie of the Year trophy during a press conference in Detroit, Thursday, Feb. 2, 2006. Carnell Williams was an All-American running back on Auburn's undefeated team in 2004. Now, the former NFL rookie of the year is running the show. Williams is serving as Auburn's interim coach for the last four games, starting Saturday at Mississippi State. He replaces Bryan Harsin, who was fired Monday, Oct. 31, 2022, after going 9-12 with the Tigers. (AP Photo/Paul Sancya, File)

Carnell Williams, an All-American running back on Auburn's undefeated 2004 team, is now running the show instead of the ball.

Still relatively inexperienced as a college coach, the former NFL rookie of the year is serving as Auburn's interim coach for the last four games, starting Saturday at Mississippi State. He replaces Bryan Harsin, who was fired Monday after going 9-12 with the Tigers.

Williams said Wednesday in his first public remarks during “a bittersweet 48 hours” that he's honored to have the chance to lead his alma mater's team.

“I’m just honored for this opportunity as someone who bleeds orange and blue,” Williams said on the Southeastern Conference coaches teleconference. “This school has given me everything. I just truly, truly feel like the good Lord works in mysterious ways and I’m in this seat for a reason.”

It's been a chaotic week for Williams and the Tigers. He learned of Harsin's firing and was offered the interim role by then-interim athletic director Rich McGlynn all by lunchtime on Monday.

Williams, who finished his degree at Auburn in December 2014, takes over a team that has lost its last four games and is in danger of a second straight losing season. That hasn't happened since the 1998-99 seasons when Terry Bowden quit midseason and was replaced by interim coach Bill Oliver.

Tommy Tuberville then went 5-6 in his first season.

But Williams also relishes the chance to become Auburn football's first Black head coach even if it's only on an interim basis.

“Just to hear that brings chills. I get goosebumps,” Williams said. “Never thought in a million years that I would honestly be in this position. It never crossed my mind.”

The fifth overall pick in the 2005 NFL draft, the former Tampa Bay Buccaneers player and Auburn's No. 2 career rusher has a much more established pedigree on the field than on the sideline.

The seven-year NFL veteran is in his fourth season as Auburn's running backs coach after one-year stints at Henderson State (2015) and West Georgia (2016), followed by a two-year stay in the same job for IMG Academy in Bradenton, Florida.

“There’s no promises. I don’t know if we’re going to win a ball game or not but one thing that will make me happy is if we play good football and hard, Auburn football,” Williams said. "Honestly, that is what I want to get these kids to do. Play hard. Compete.

“And at the end of the day, I told these kids, win, lose or draw, if we do that, not only would we make ourselves proud but I know the Auburn family would be proud of us, too.”

Williams said all the new responsibilities have made him much busier and left less time for sleep. Not that he's complaining.

The 40-year-old demurred when asked if he wanted to be considered for the position beyond this season. New athletic director John Cohen, whose hiring away from Mississippi State was announced a few hours after Harsin's firing, is leading that search.

“Honestly, all I’m trying to do is win a football game this week and do my best for these players and this staff and the Auburn family,” he said. “I’m taking it one day at a time, one minute at a time. I’m not even focused on all the what ifs.

"I’m being where my feet are, not only myself but also this team. We’re enjoying this moment.”