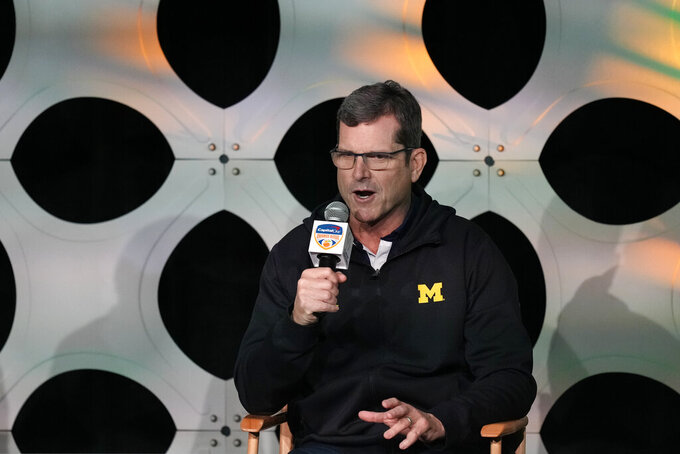 FORT LAUDERDALE, Fla. (AP) — Alabama coach Nick Saban had a message for his players ahead of their week in Texas preparing for the College Football Playoff.

“You’re not going to remember what you did on Tuesday night in Dallas three months from now, three weeks from now or three years from now," Saban said. "But you’ll remember for the rest of your life what happens in the game.”

For years, college coaches have worried about players partying too much ahead of big games. The pandemic has added another thing to fret over.

The latest surge in COVID-19 cases fueled by the omicron variant has led to five bowl games being canceled in the past two weeks, and forced two others to find replacement teams after one of the original selections withdrew with virus issues.

The biggest games of the postseason appear to be on as scheduled Friday. No. 1 Alabama will face No. 4 Cincinnati in the Cotton Bowl at AT&T Stadium in Arlington, Texas, and No. 2 Michigan and No. 3 Georgia square off in the Orange Bowl at Hard Rock Stadium in Miami Gardens, Florida.

“We had a little bout the last couple weeks that we lost some guys, and we’ve gotten most of those guys back, and really that’s the biggest thing, is being at full strength when you have to be, and that’s what we’re aiming towards,” Georgia coach Kirby Smart said.

The virus has roiled college basketball with dozens of games postponed or canceled. Professional sports have had all sorts of issues, too, and have adjusted protocols to try to get players back in action quicker.

It looks as if college football has been relatively lucky, but the explanation might have more to do with the protocols and transparency.

Policy details vary from school to school and conference to conference, but most schools have only been regularly testing unvaccinated athletes for COVID-19 throughout this season.

Exactly how many players on each team are vaccinated is unknown, but Michigan's Jim Harbaugh was among the first coaches to boast back in the summer that all of his player had gotten their shots.

Saban said last week all of Alabama's players had been given a booster shot. Smart said his players had all been offered boosters, but gave no indication of how many took it.

"We usually don’t get tested unless we have symptoms,” Alabama receiver Slade Bolden said.

Testing of vaccinated athletes could be triggered if they have been in close contact with an infected individual.

As for transparency, college football coaches are notoriously tight-lipped when it comes to injury information about players. So it's no surprise they haven't been talking about players who test positive.

The result is speculation replaces information.

For example, Harbaugh confirmed Thursday that Michigan defensive back Dax Hill did not travel to Florida with the team and the junior's status for the game is questionable, but gave no details as to why.

All the media availabilities for the playoff teams this week were moved from in-person to online.

Cotton Bowl officials made other activities and outings planned for players optional.

Cincinnati attended the Cowboys game on Sunday, the day they got into town.

Alabama players said they voted to skip everything.

“We are really around the hotel," linebacker Christian Harris said. "Playing a game or just chilling, watching film, or getting recovery in, get some treatment. It’s a time for us to really bond with the team, us just being here a lot and being able to spend time with each other some more.”

Defensive tackle DJ Dale said: “I don’t feel like we’re missing out on anything, but I feel like for us, we came here to play a football game and to win a football game. So everything else, it really doesn’t matter to me.”

In South Florida, the players seem to be more active, with both teams staying near the beach and a few bowl events held outside.

“I mean, of course there’s anxiety, but I mean, we’re all doing the right things, so it’s not really that deep for us,” Michigan defensive back Brad Hawkins said. “We just continue to just do the right things and continue to follow all the rules in the right way, and we’re going to be fine.”

Georgia offensive lineman Jamaree Salyer was thinking big picture when asked about steering clear of COVID-19 before the big game.

“COVID is affecting everybody, and my heart goes out to all the families affected to it,” he said. “Yeah, it’s really been tough, but we’ve managed it the best we can. Got some of the best athletic trainers in the country, our staff. They do a really great job making sure we’re all safe and healthy. Yeah, it’s been tough, but we’re managing pretty well.”