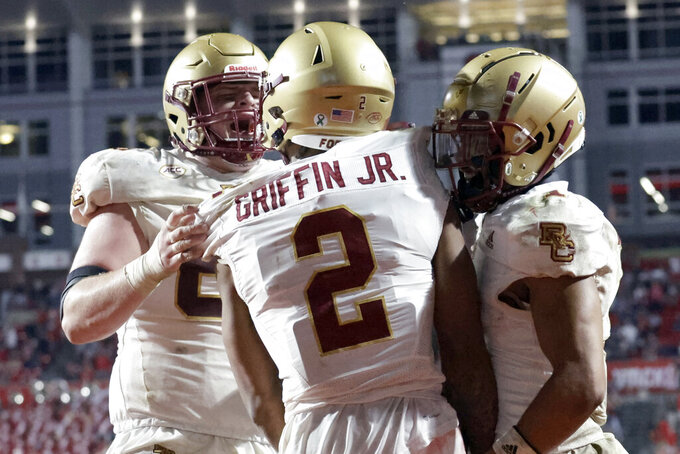 He came through big time when it really counted.

Morehead threw a 2-yard touchdown pass to Joseph Griffin Jr. with 14 seconds left and the Eagles rallied past No. 17 North Carolina State 21-20 Saturday, their first win over a Top 25 team in eight years.

“Two-minute drills end up deciding a lot of games,” Morehead said. “It’s just executing your job. Guys making plays across the board.”

“That’s probably the funnest game I’ve ever played here,” defensive end Marcus Valdez said. “That belief has been there. Now that belief is going to skyrocket.”

“I didn’t want him to be tight and he wasn’t,” Hafley said.

Morehead, a redshirt freshman making his second career start, was 29 of 48 for 330 yards with three touchdowns and two interceptions. He threw a pair of TD strikes to Zay Flowers, who caught seven passes for 130 yards, as the Eagles snapped a four-game losing streak.

“I knew we were going to get one eventually,” Flowers said. “We didn’t stop believing in each other.”

It’s the most notable victory in Hafley’s three seasons.

“(Our players) needed some validation from all that hard work,” he said. “They needed to feel moments like this.”

M.J. Morris threw and ran for early touchdowns for the Wolfpack (7-3, 3-3), which committed four second-half turnovers. This was N.C. State’s third game decided by one point this season — it won the other two.

The Wolfpack was denied a school-record 17th consecutive home victory.

“I don’t know really what to say,” N.C. State coach Dave Doeren said. “I’m pretty down for these kids.”

Turnovers cost both teams in the second half.

Boston College had a chance to go ahead in the third quarter after recovering a fumble in Wolfpack territory. But Morehead, with Devan Boykin grabbing him, threw a wayward pass intercepted by Payton Wilson.

Early in the fourth quarter, Marcus Valdez knocked the ball out of Morris’ hand, and Boston College took over at the N.C. State 40. The Eagles failed to pick up a first down and gave it back on an incomplete fourth-down pass.

In its five possessions prior to the winning drive, the Eagles had a turnover, a failed fourth-down play and three punts.

N.C. State moved with ease on its first two possessions. Morris hit Trent Pennix for a 27-yard touchdown play to begin the scoring. Morris ran 10 yards with a nice cut to dodge defenders for the Wolfpack’s second touchdown.

Two plays after Boston College’s fourth-down conversion in the second quarter, Morehead connected on a 17-yard touchdown pass to Flowers.

“He deserves the record,” Hafley said. “He deserves to have all the good things coming to him. … He’s like a magician out there.”

The Wolfpack was in position to win every home game in consecutive seasons for the first time since 1973 and 1974. Instead, N.C. went 6-1 this year at Carter-Finley Stadium.

“It’s pretty disappointing,” Wilson said. “I think a lot of us were excited to leave Carter-Finley with a win. I hurt for everyone.”

With his second field goal, Dunn became the ACC’s career leader in field goals with 89 in his five-year career. Florida State’s Dustin Hopkins (2009-12) held the record at 88.

Boston College: The Eagles are a work in progress offensively, but its defense allowed them to hang in there long enough. Morehead faced considerable pressure from N.C. State’s pass rush, making enough plays and a healthy number of good decisions along the way.

N.C. State: The Wolfpack didn’t do much on offense after the first quarter, continually putting its defense in tough situations. The veteran defense is one of the most-respected groups in the ACC, but the heavy workload in the second half took a toll.

N.C. State might be hard-pressed to remain in the rankings for the 18th week in a row when the new poll comes out Sunday.

Boston College: At No. 20 Notre Dame next Saturday.

N.C. State: At Louisville next Saturday.