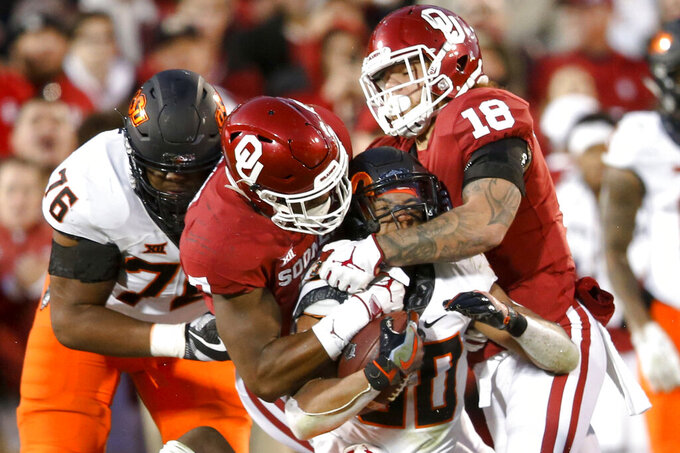 FILE - In this Nov. 10, 2018, file photo, Oklahoma defensive end Ronnie Perkins (7) and linebacker Curtis Bolton (18) tackle Oklahoma State running back Chuba Hubbard (30) during an NCAA college football game in Norman, Okla. The Bedlam rivalry between No. 7 Oklahoma and No. 21 Oklahoma State is back at the end of the regular season after earlier November dates the past two seasons. (Ian Maule/Tulsa World via AP, File)

Bedlam and “Farmageddon” will close out the Big 12 regular season.

The Bedlam rivalry between No. 7 Oklahoma and No. 21 Oklahoma State is back at the end of the regular season after earlier November dates the past two seasons. This is the third year in a row Kansas State and Iowa State play on the final weekend.

“Doesn’t matter when it falls, where it’s at, always obviously a meaningful football game for this state,” Oklahoma coach Lincoln Riley said. “This is one of the best rivalry games without a doubt. Being the last regular season game of the year, certainly one that we’re very motivated to go play our very best ball.”

For the four-time defending Big 12 champion Sooners (10-1, 7-1 Big 12, No. 7 CFP), still hoping to get back to the College Football Playoff for the fourth time in five seasons, Bedlam is another longstanding rivalry against a Big 12 foe.

Other than the Red River rivalry game between Oklahoma and Texas — played during the State Fair of Texas each October — no other Big 12 games necessarily have set spots on the schedule each season. But this will be the 12th time in 15 years that Bedlam will end the regular season.

Oklahoma and Oklahoma State meet Saturday night for the 114th time, one game fewer than the Sooners have played Texas. The extra game among the border-state rivals came in the Big 12 championship game last December, the first time since 1929 the Sooners and Longhorns had played outside the State Fair.

But Oklahoma isn’t part of the longest or most-played rivalries among the conference teams. One series goes back to the end of the 19th century, 97 years before the Big 12’s inaugural season.

The “Revivalry” between the league’s two private Christian universities dates to a scoreless tie in the first meeting in 1899, when Baylor and TCU were both located in Waco, Texas. Baylor won in triple overtime earlier this month, but TCU has a 55-53-7 lead in their 115 games. They were in the Southwest Conference together for seven decades, but there was a 10-season hiatus in the series after TCU was left out of the original Big 12 in 1996, then only four non-conference meetings before the Horned Frogs joined the league in 2012.

Their campuses separated by a 100-mile stretch of Interstate 70, Kansas and Kansas State met for the 117th time earlier this month in a series that has been played since 1902. The winner of the Sunflower Showdown gets the Governor’s Cup, which has now gone to Kansas State 11 consecutive seasons. That matches the longest series winning streak by Kansas, which leads 65-47-5 overall.

DAY AT THE FAIR

The Red River rivalry between Oklahoma and Texas is played in the middle of the State Fair of Texas in Dallas, about halfway between their campuses in Norman, Oklahoma, and Austin, Texas. Their passionate fans clad in crimson and burnt orange are split 50-50 at historic Cotton Bowl Stadium, and the winner takes home the Golden Hat Trophy. They first played in 1900.

Iowa State and Kansas State play for the 103rd time Saturday in Manhattan, Kansas, in a series dubbed by others as “Farmageddon” because of the agriculture background for the two land grant universities. There is no official trophy for the winner. Iowa State leads the series 50-48-4 after a 42-38 home win last year ended a 10-game losing streak to the Wildcats.

Texas Tech and TCU reinstated the Saddle Trophy in 2017, with a new replica version of the trophy that was lost after the teams had played for it from 1961-70 (when both were still in the Southwest Conference). Like TCU’s series with Baylor, there was a hiatus and only two games played between 1996 and 2011. Since TCU’s 82-27 home win in 2014, the visiting team has won the last five games — four by a combined 11 points.

Baylor 61, TCU 58, 2014. Their 110th meeting was the first with both as ranked teams, with both in the top 10 for the midseason game. Fifth-ranked Baylor scored 24 points in the final 11 minutes and beat ninth-ranked TCU on a field goal as time expired. About two months later, after both teams finished the regular season 11-1 and there was no Big 12 championship game, Baylor and TCU were declared co-champions. They were then the first two teams left out of the first-ever four-team College Football Playoff.