Big chance arrives for No. 4 Notre Dame with Clemson in town 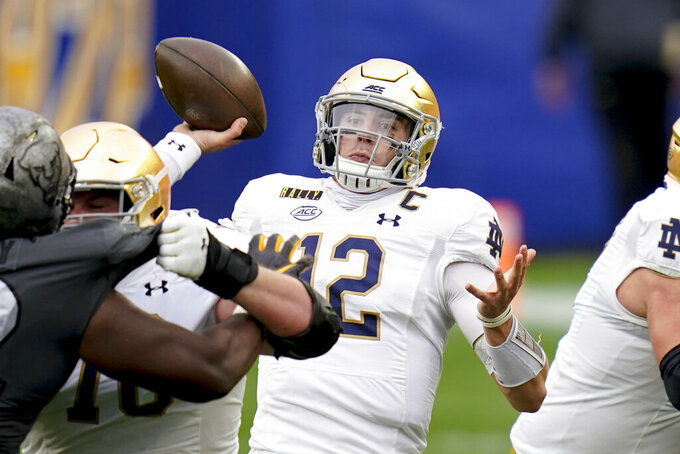 SOUTH BEND, Ind. (AP) — Twice before in the last nine seasons, Notre Dame has found itself knocking on college football’s penthouse door, had it opened and then slammed shut in its face.

On Saturday at Notre Dame Stadium, the fourth-ranked Fighting Irish get another chance to take their place at the table when they host No. 1 Clemson in a game that will have both Atlantic Coast Conference and College Football Playoff ramifications.

During his 10 previous seasons in South Bend, Notre Dame coach Brian Kelly twice has taken 12-0 teams into the postseason and seen them run over by their opponent. In 2012, it was a 42-14 loss to Alabama in the championship game.

Two years ago, it was Dabo Swinney’s Clemson team that beat the Irish 30-3 in a College Football Playoff semifinal on the way to winning the national championship.

Kelly was somewhat irritated this week making a case that his Fighting Irish belong among the nation’s elite programs like Clemson (7-0, 6-0 ACC), No. 2 Alabama and No. 3 Ohio State, which have won 10 national championships since Notre Dame last won one in 1988.

“You’ve got to execute, you got to play well in the moment,” Kelly said. “This team has exhibited that they’re not a team that’s going to back away from a challenge. And when they’re down, they’ll certainly pick up their pace and answer any challenges that are in front of them. I have no question about that.”

For the most part this season, Notre Dame’s defense and special teams have been solid.

Defensive coordinator Clark Lea’s unit, which allowed 151 yards in the first quarter of the season opener against Duke, has become one of the stingiest in the country led by defensive end Daelin Hayes, rover Jeremiah Owusu-Koramoah and free safety Kyle Hamilton. Since allowing 405 yards in a 42-26 home victory over Florida State, the defense has allowed just two touchdowns and a field goal in victories over Louisville, Pittsburgh and Georgia Tech while accumulating four turnovers and eight sacks.

Special teams coordinator Brian Polian’s units have a pair of blocked punts for touchdowns, have consistency in place-kicker Jonathan Doerer (25-25 PATs, 7-9 FGs) and punter Jay Bramblett (41.4 yards per kick) and have kept returns to a minimum. The mistakes have been rare – a fumbled punt return that Florida State turned into a touchdown and a mishandled onside kick against Georgia Tech that Lea’s defense overcame.

Notre Dame’s struggles have mostly been on offense where first-year coordinator Tommy Rees, a former quarterback for Kelly, had to identify new playmakers for grad quarterback Ian Book. Still, the Irish are averaging 437.2 yards and 34.8 points a game.

The return of an offensive line led by left tackle Liam Eichenberg that now boasts 137 career starts has helped the running game. Kyren Williams has three 100-yard rushing efforts while Chris Tyree and C’Bo Flemister have one each as the Irish have ground out 231 yards a game.

Book’s receiving options were limited at first, but freshman tight end Michael Mayer has joined holdovers Tommy Tremble and Brock Wright to strengthen the position. Meanwhile, grad transfer Ben Skowronek, grad Javon McKinley, senior Avery Davis and junior Joe Wilkins have begun to jell with Book, who has passed for 511 yards and four touchdowns in the last two victories at Pitt (45-3) and Georgia Tech (31-13) and is 26-3 as a starter.

“We’re getting better every week,” said Book, who has 129 consecutive completions without an interception, thrown for 1,225 yards and rushed for 212 yards. “We haven’t peaked yet. Now it’s time to go.”