Bryant bounces back to lead Missouri over Mississippi 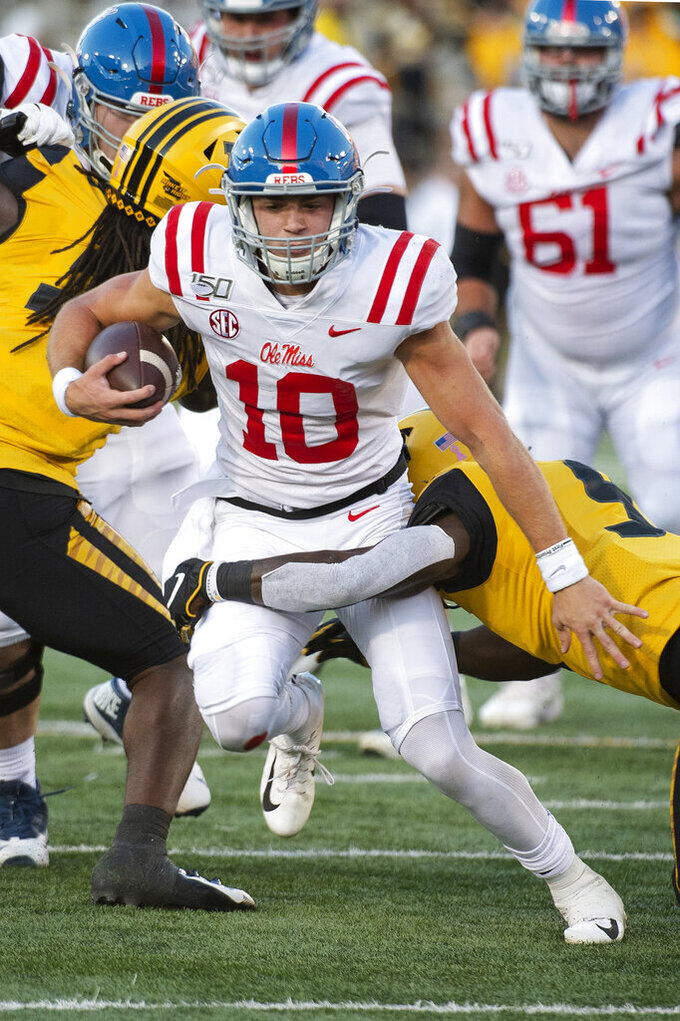 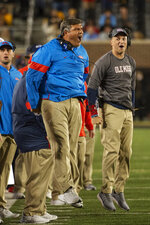 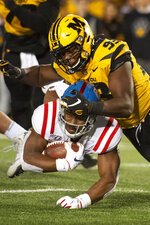 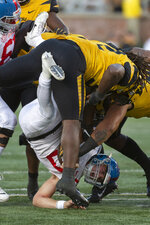 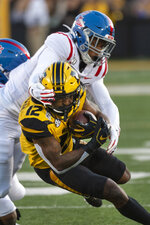 COLUMBIA, Mo. (AP) — Last week, when he heard a pop in his left knee after being hit low, Missouri quarterback Kelly Bryant briefly saw his college football career pass before his eyes. The injury wasn't as bad as it looked, and Bryant played like his old self in a 38-27 victory over Mississippi on Saturday.

Bryant, a graduate transfer from Clemson, completed 23 of 35 passes for 329 yards and one touchdown for the Tigers (5-1, 2-0 Southeastern Conference).

"I felt good, felt normal, like there wasn't anything hindering me from playing my game," Bryant said.

Bryant spent the second half of last week's victory over Troy in the locker room, and Missouri fans feared the worst. But the injury was just a sprain, and Bryant didn't miss any practice.

"I was hoping, and a little bit of prayer, and a little bit of crossing your fingers, and all of the above," Missouri coach Barry Odom said. "He didn't miss a beat. It's a little bit amazing to me for the injury that is was, to come back and not miss a rep in practice, it says a lot about the type of person he is. . You talk about a competitive son of a gun."

Mississippi freshman quarterback John Rhys Plumlee rushed 23 times for 143 yards and two touchdowns and completed 8 of 17 passes for 103 yards and two scores — all that despite splitting snaps with Matt Corral. Elijah Moore caught eight passes for 102 yards and a touchdown for Ole Miss (3-4, 2-2 SEC).

The Rebels left points on the field in the first half. A 57-yard Plumlee touchdown run was called back on an unneeded downfield hold by wide receiver Miles Battle. Just before halftime, coach Matt Luke elected to go for it on fourth-and-goal from the 1. Snoop Conner was stuffed for no gain by a group of Tigers led by linebacker Nick Bolton, and Missouri hung on to a 12-7 halftime lead.

"You go back, and if we score that right before half, even if ... we play as bad as we did in the third quarter, it's a one-score game right there," Luke said. "And so it had a huge effect on the game. But again, when you're on the road, you gotta go find a way to punch it in from 1 yard out. And then again, obviously, the holding call that calls a touchdown back — it's just too many missed opportunities in this football game."

The Tigers broke off six plays of 20 yards or more in the second half. On Missouri's first drive of the third quarter, Rountree burst through the left side of the line, stepped out of a diving tackle attempt by cornerback Jaylon Jones and raced 41 yards for a touchdown. Later in the third period, Downing plowed through the right side, broke into the clear and dragged Jones for the last 4 yards of a 58-yard touchdown run that gave the Tigers a 28-7 lead.

The Rebels start answering in the fourth quarter but could never cut the deficit below 11 points.

Ole Miss shuffled between Plumlee and redshirt freshman Matt Corral — sometimes even rotating plays on the same series. Plumlee saw time in all four quarters. Corral played in all but the first quarter and completed 10 of 16 passes for 133 yards.

"Matt ran a little bit, and J.R. threw a little bit, so I don't think you can just hone in on one thing that they do," Ole Miss offensive coordinator Rich Rodriguez said. "And that's our goal is that all quarterbacks can do all the stuff."

HIGHS AND LOWS FOR JOHNSON

If he didn't play on special teams, Missouri wide receiver Jonathon Johnson would have had an unquestionably great game. He caught eight passes for 110 yards.

As a return man, it was a different story. He muffed a punt in the first quarter that Ole Miss' A.J. Finley recovered, setting up the Rebels' first touchdown. In the fourth quarter, he took a knee on his own 1 after picking up a bouncing kickoff.

"I thought it was going to bounce into the end zone," Johnson said. "I wanted to pick it up and run it, but it was one of those crazy moments and I was just thinking too much."

Missouri kicker Tucker McCann missed two extra points the same way — smacking them off the right upright. Perhaps McCann just needed to back up. He was perfect on field goals of 31, 38, 39 and 48 yards.

Missouri: The SEC East race opened up with third-ranked Georgia's upset loss to South Carolina and seventh-ranked Florida's loss at LSU on Saturday. Missouri, the only team in the East without a conference loss, could be a sleeper contender. The Tigers, who don't have to face any SEC West heavyweights, will be favored in their next two games at Vanderbilt and Kentucky before visiting Georgia on Nov. 9.

Mississippi: The Rebels struggled on defense and will be short-handed in the first half of next week's game. Linebackers Jacquez Jones and Sam Williams were ejected for targeting for hits to Bryant's head in the second half.

By Jim Litke 33 minutes ago
By Steve Reed an hour ago
By Nicholas K. Geranios 14 hrs ago
16 hrs ago
By Will Graves 19 hrs ago