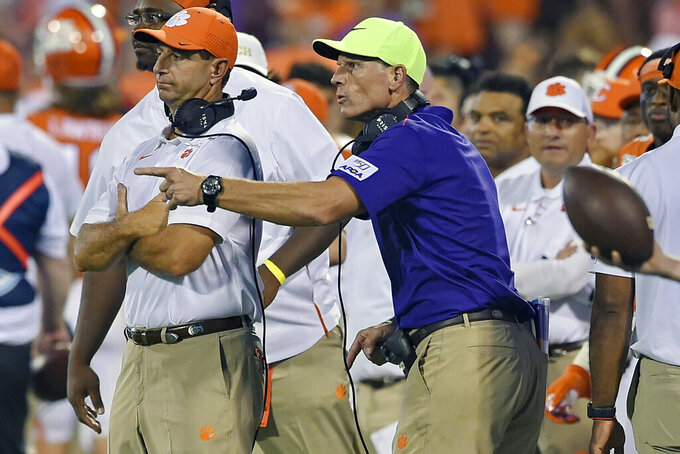 CLEMSON, S.C. (AP) — Clemson coach Dabo Swinney kept getting calls and texts from friends and colleagues asking how he was doing the past two weeks.

Swinney and his championship football program underwent a shakeup unlike anything he had faced in 13-plus seasons as Tigers coach. Defensive coordinator Brent Venables left to become head coach at Oklahoma. Offensive leader Tony Elliott is now the Virginia head coach and athletic director Dan Radakovich left Clemson to take the same job at Miami.

All trusted confidants, all significant contributors to Clemson's success the past decade.

That remains to be seen.

Much of the credit for Clemson's run of six straight Atlantic Coast Conference titles from 2015-2020 and national championships after the 2016 and 2018 seasons has been its stability.

Venables was hired from Oklahoma after the 2011 season and created one of the best defenses in the country for a decade.

Elliot, a former Clemson player under then-receivers coach Swinney in 2003, rejoined the team as an offensive assistant 10 years ago and rose to coordinator after Chad Morris' departure in 2014. The Tigers offense averaged better than 500 yards a game in five of seven seasons under Elliott.

Radakovich came to Clemson in 2012 and was a driving force behind football's $55 million headquarters, which at the time of its opening in 2017 was considered state of the art in college football.

Swinney said he will miss working with them but understands their choices to go.

“Continuity is great,” the coach said. “I love continuity, but new opportunity is great, too.”

Roddy Jones, a college football analyst for the ACC Network, said Swinney's track record on hiring the past decade should give him some breathing room at seeing how things shake out.

Clemson, Jones said, will still have the most talent in the ACC entering next season and will likely be favorites for the 2022 league crown after missing out on lifting the conference trophy for the first time since 2014.

“It's OK for them to have a year when things didn't all go their way,” Jones said.

Clemson was No. 3 in the preseason rankings and then out of the Top 25 by September's end after losses to Georgia and North Carolina State. The 19th-ranked Tigers (9-3; No. 19 CFP) finished by winning seven of eight and will look for its 11th straight 10-win season when they play Iowa State (7-5) in the Cheez-It Bowl in Orlando, Florida later this month.

While Swinney, 52, has embraced change on his staff, he is not happy with the national landscape, particularly player transfer rules. He's long been against the revamped guidelines, including giving undergraduate transfers a one-time opportunity to play immediately at their new school.

Clemson has seen several players including former starters in running back Lyn-J Dixon and receiver Frank Ladson enter the portal this season.

“It’s total chaos right now,” Swinney said this week. “Tampering galore. Kids are being manipulated. Grass is greener and all that stuff as opposed to putting the work in and graduating. There’s no consequences."

Swinney has advocated making underclassmen sit out a season after changing programs and returning that lost year upon graduation.

Retaining player is just one concern amid all the changes.

Recruiting is where Clemson must quickly prove it can succeed with its new staff, Jones said. The Tigers had three high-profile, defensive de-commitments after Venables' departure.

Clemson signed 12 players Wednesday in the early signing period, second to North Carolina in ACC rankings according to 247sports.com. The Tigers' highest-ranked player who has signed so far is defensive back Jaedyn Lukus of Mauldin, South Carolina, rated the 48th top prospect, according to ESPN.com.

“There are always some consequences to change,” Swinney said.

The coach is not worried about anyone's concern outside of his program.

“There is nobody that has more at stake than Coach Swinney. It’s my livelihood. This is what I do for a living,” Swinney said. "If people don’t believe in me after 13 years of what they’ve experienced at Clemson, they ain’t never going to believe in me.”

Still the coach knows, it often comes down to what have you done lately.