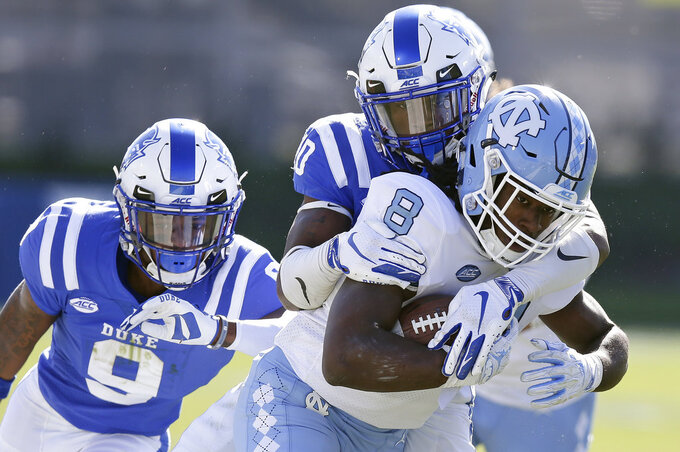 North Carolina's Michael Carter (8) runs the ball while Duke's Jeremy McDuffie (9) and Marquis Waters move in for the tackle during the first half of an NCAA college football game in Durham, N.C., Saturday, Nov. 10, 2018. (AP Photo/Gerry Broome)

That has the Blue Devils keeping the Victory Bell after another rivalry win against North Carolina.

Jones accounted for a program-record 547 total yards and four touchdowns to help Duke beat UNC 42-35 on Saturday, earning the program's third straight win in the longtime series of nearby neighbors.

Jones threw for 361 yards and three touchdowns for the Blue Devils (7-3, 3-3 Atlantic Coast Conference). He also ran for a 61-yard touchdown and had a 68-yard keeper in a 186-yard rushing day, helping Duke finish with a season-high 629 yards.

And there was no shortage of praise for the redshirt junior's performance.

"Daniel Jones played as well as a quarterback can play," said Duke coach David Cutcliffe, who has had a few notable pupils in his coaching career that includes a couple of guys named Peyton and Eli Manning.

"I know I'm not the fastest guy on the field," Jones said of his runs. "I was trying to run as fast as I could. Both of those long runs, I'm not sure I really got touched, and I think that's a credit to those guys up front."

Jones' 547 yards of total offense were also the most ever allowed by UNC, surpassing the record of 525 yards set last year by reigning Heisman Trophy winner Lamar Jackson of Louisville.

After taking a 35-28 lead into the break following a shootout of a first half, Duke pushed to a two-possession lead when Jones' 68-yarder set up a short TD run by Quentin Harris. The Tar Heels (1-8, 1-6) got back in it with Nathan Elliott's 13-yard TD throw to Thomas Jackson with 75 seconds left.

Then, after a late stop, UNC had a final drive for the tie and pushed to the Duke 39 with 6 seconds left. But Duke's Brandon Feamster ended it by knocking down the end-zone pass from Cade Fortin — a strong-armed freshman brought in for the final heave in his first appearance since being injured against Virginia Tech.

"We're throwing a jump ball to tie the game up," UNC coach Larry Fedora said. "They're a good football team. Our guys continue to fight. There's no question about that, who they are and what they're made up of. I'm proud of them for that fact."

UNC: The Tar Heels had another uneven performance, the kind of fix-one-thing-and-something-else-breaks issues frequently seen this season. Michael Carter (148 yards and a TD) and the ground game couldn't be stopped before halftime while the defense struggled, only to reverse roles with the defense coming up with a blocked field goal and two takeaways after halftime as the offense went into a 28-minute slumber. UNC fought to the final play, but still ended with a 20th loss in 25 games.

Duke: Jones grabbed the headlines with the total-offense record (set in 1988) and the biggest rushing day by a Duke quarterback (set in 1976). But the defense came up big, too, by turning the Tar Heels away repeatedly after halftime.

Duke was already down several injured starters this year when starting safety Dylan Singleton limped off the field in the first quarter. Cutcliffe said he will have surgery Sunday without specifying the nature of the injury.

"There's just so much emotion in that rivalry, and especially toward the end it got a little closer than you'd like," Duke left guard Zach Harmon said. "So it's just a huge payoff of relief at the end, it couldn't feel better."

UNC: The Tar Heels step out of league play to host Western Carolina next Saturday.

Duke: The Blue Devils draw the toughest of cross-divisional matchups, traveling to No. 2 Clemson next Saturday.