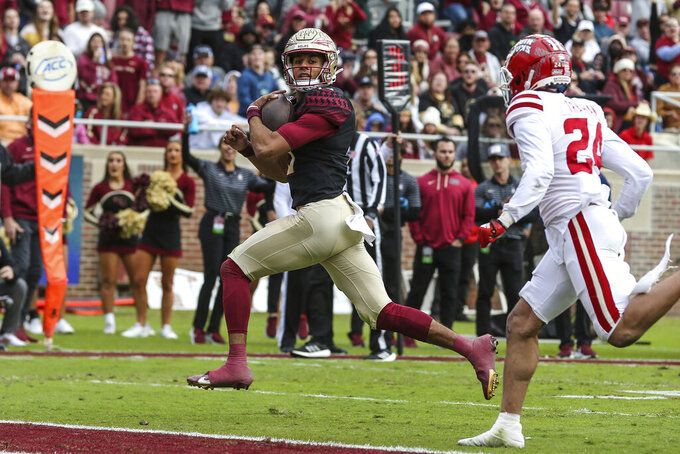 Florida State quarterback Jordan Travis (13) runs the ball for a touchdown during the first half of an NCAA college football game against Louisiana on Saturday, Nov. 19, 2022, in Tallahassee, Fla. (AP Photo/Gary McCullough)

State as well as yearlong bragging rights are on the line. Florida State could claim a sweep of its in-state rivals for the first time since 2016 with a win over Florida (after beating Miami earlier this month), while the Gators can salvage a monumental victory in a difficult Year 1 for coach Billy Napier.

Florida State’s running game vs Florida’s run defense. The Seminoles have run for 200 or more yards in six consecutive games, the longest active streak in the nation, and are ranked 14th in the FBS in rush offense (217 yards per game). The Gators rank 10th in the SEC and 92nd in the FBS against the run, allowing 171.55 yards per game on the ground. Gatr

Florida: QB Anthony Richardson is coming off his second 400-yard passing performance of the season. He completed 25 of 42 passes for 400 yards and three TDs in a 31-24 loss at Vanderbilt. If the Gators have any chance in Tallahassee, Richardson has to be accurate while throwing the ball and dynamic while running it.

Florida State: Jordan Travis has thrown for 21 touchdowns and has five rushing TDs, becoming just the fourth quarterback in school history to do so. The redshirt junior is an improving passer and has completed 63% of his throws during Florida State’s four-game winning streak.

In Florida’s three-game series winning streak, the Gators have outscored the Seminoles 105-52 … Trey Benson has run for 854 yards and averages 7.1 yards per carry. He is in line to become Florida State’s first 1,000-yard rusher since Cam Akers in 2019 … FSU leads the nation with seven touchdown drives of 90+ yards and is 2nd nationally with 15 touchdown drives of 80+ yards this season. … Florida has three running backs who are among the top 10 rushers in the SEC in yards per carry: Richardson (6.6, fourth), Trevor Etienne (6.2, sixth) and Montrell Johnson Jr. (5.8, 10th). … Florida State coach Mike Norvell is 19-5 (.792) in November, including 3-0 this season … Napier and Norvell are facing off for the first time as head coaches.