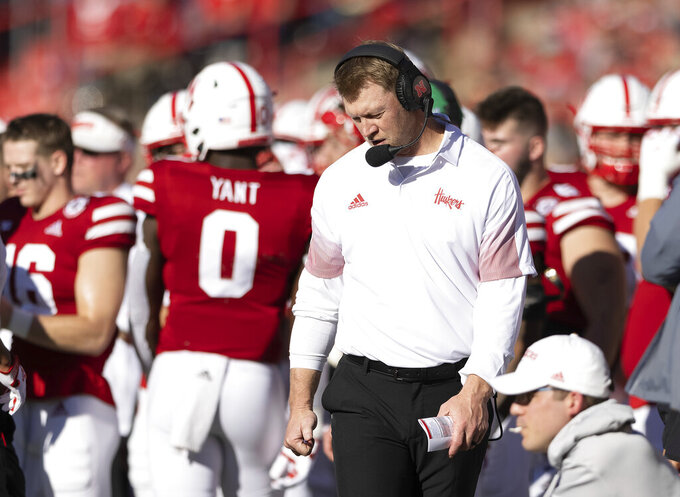 Athletic director Trev Alberts said he has seen enough progress in the once-proud program to merit bringing back Frost, who goes into next year with four straight losing seasons at his alma mater.

The Cornhuskers are 15-27 and have never finished higher than fifth in the Big Ten West under Frost. The Huskers are 3-7 overall and 1-6 in Big Ten games this season but haven't lost by more than nine points with one of the toughest schedules in the country.

“We all recognize our record has not been what anyone wants it to be,” Alberts said in a statement. “I have been clear that I have been looking for incremental progress, and I have seen that in several key areas this season. Our team has continued to compete at a high level and the young men in our program have remained unified and shown great resiliency, which is an important reflection of the leadership of Coach Frost and his staff.”

“I appreciate the work and sacrifices these men have made for the University of Nebraska and this football program and wish all of them well,” Frost said. “They are all men of outstanding character and good coaches, but as we strive for better consistency and execution, we needed fresh ideas and voices on our offensive staff.”

Frost did not announce who would take over those assistant coaching jobs for the final two games of the season.

Frost is under contract through 2026 and was scheduled to make $5 million per year. Alberts said on the Husker Sports Network that Frost agreed to have his salary reduced to $4 million in 2022, and the amount the university would have to pay Frost if it fired him next year was cut from $15 million to $7.5 million. Alberts did not disclose other terms of the restructured contract.

Frost is a native Nebraskan and was quarterback for the Huskers' 1997 national championship team. He coached Central Florida to an undefeated season in 2017 before returning to Lincoln.

“I appreciate the confidence Trev Alberts has shown in me to continue to lead this program," Frost said. “I love this state, this football program and am honored and humbled for the opportunity to serve as the head coach at my alma mater.”

The 46-year-old Frost came back to Nebraska to revive a program that has won or shared five national championships and is among only eight schools with 900 all-time wins. He so far has been unable to extract the Huskers from their lowest point since they had six losing seasons in a row and no bowl appearances from 1956-61. Nebraska also hasn't won a conference championship since 1999.

Frost is 0-11 against Top 25 opponents and is still searching for a signature victory. The Huskers opened this season with an ugly loss at Illinois; their only wins are against Fordham, Buffalo and Northwestern.

But they hung with ranked opponents Oklahoma, Michigan State, Michigan and Ohio State, losing those four games by a total of 22 points. The Huskers’ 5-18 record under Frost in games decided by eight points or less is worst in the Football Bowl Subdivision.

The Huskers, whose next game is Nov. 20 at No. 20 Wisconsin, have dropped four straight after losing 26-17 at home to the Buckeyes.

Nebraska has relied on strong defensive play to stay in the close games, but special teams, especially the kicking game, have been horrid and the offense has been inconsistent and mistake-prone with fourth-year starting quarterback Adrian Martinez.

“I am excited to continue to work together with Scott,” Alberts said. “We share a love of Nebraska and this football program and want nothing more than Nebraska football to again compete for championships.”

According to Associated Press research of College Football Reference records spanning more than a century, 27 current Power Five programs have retained one or more football coaches who started with four straight losing seasons. Six of 42 coaches brought back for a fifth year eventually got their teams to a bowl, but none won a conference title in years five or beyond.

Frost will be only the second Power Five coach since 2011 to survive starting with four straight losing regular seasons. The other was current Duke coach David Cutcliffe, who went .500 in the regular season of his fifth year (2012) before losing in a bowl.

Lovie Smith was 6-6 in the regular season of his fourth year at Illinois (2019) but lost in a bowl and was fired late in his fifth season. Vanderbilt's Derek Mason had seven straight losing records but made bowls — and lost — after 6-6 regular seasons in 2016 and 2018. He was fired late last season.

Frost is the second Nebraska coach to be retained after opening with four losing seasons. The other was Bill Jennings, who won 12 games from 1957-60 before getting fired following a 3-6-1 season in 1961.