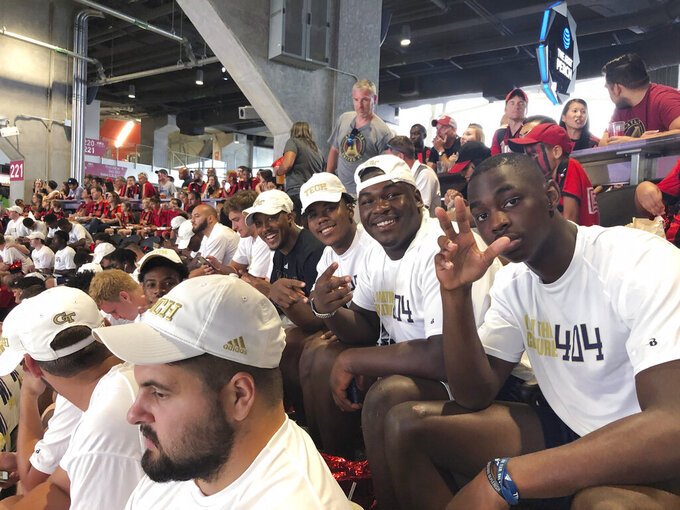 Georgia Tech football players attend the MLS soccer match between Minnesota United and the LA Galaxy on Saturday, Aug. 3, 2019, in Atlanta. New Georgia Tech coach Geoff Collins set up the outing after his team's fan day at Bobby Dodd Stadium, part of his effort to make the Yellow Jackets a vibrant part of the city's sports culture. (AP Photo/Paul Newberry)

The Yellow Jackets' players, coaches and staff attended the Major League Soccer game between Atlanta United and LA Galaxy at Mercedes-Benz Stadium, standing out in Section 221 in their white-and-gold T-shirts.

Most fans in the record crowd of 72,548 were adorned in red and black, which are United's primary colors.

New Georgia Tech coach Geoff Collins set up the outing after his team's fan day at Bobby Dodd Stadium, part of his effort to make the Yellow Jackets a vibrant part of the city's sports culture.

"Probably 90 percent of our players and staff has never been to a soccer game," said Collins, who was wearing a white cap emblazoned with the city's "404" area code in gold. "We wanted to come and embrace everything that's great about Atlanta."

He had other motives as well, giving his players a firsthand look at the $1.5 billion stadium that is less than a mile from campus and will begin hosting one Georgia Tech game a season in 2020 as part of a five-year deal.

"I want to maximize every chance that we have to get our guys used to being over here," Collins said at halftime. "We want to let them see the venue, feel the environment."

Atlanta United, the reigning MLS Cup champions, beat the Galaxy 3-0 to move into a tie for first place in the Eastern Conference. The team has set numerous attendance records since entering the league in 2017.

Collins is mindful of that, taking over a program that has struggled to fill its 55,000-seat stadium and often gets obscured by the city's pro sports teams as well as rival Georgia.

"I'm trying to engage with the Atlanta United fan base," he said. "Just let 'em see Georgia Tech football is relevant. We're having a lot of fun doing what we're going, putting a great product on the field, building a great culture and a great brand."

To that end, Collins also plans to take his team to an Atlanta Braves baseball game at SunTrust Park in two weeks, as well as a seniors-only outing to an Atlanta Falcons NFL exhibition game.

In a fitting touch, Collins revealed that he is named after Geoff Hurst, who scored three goals in the 1966 World Cup final to lead England to a 4-2 victory over West Germany.

"That's why my name is spelled G-E-O-F-F," Collins said. "My dad was a huge soccer fan before it was in vogue to do that. So I was raised on this great game."