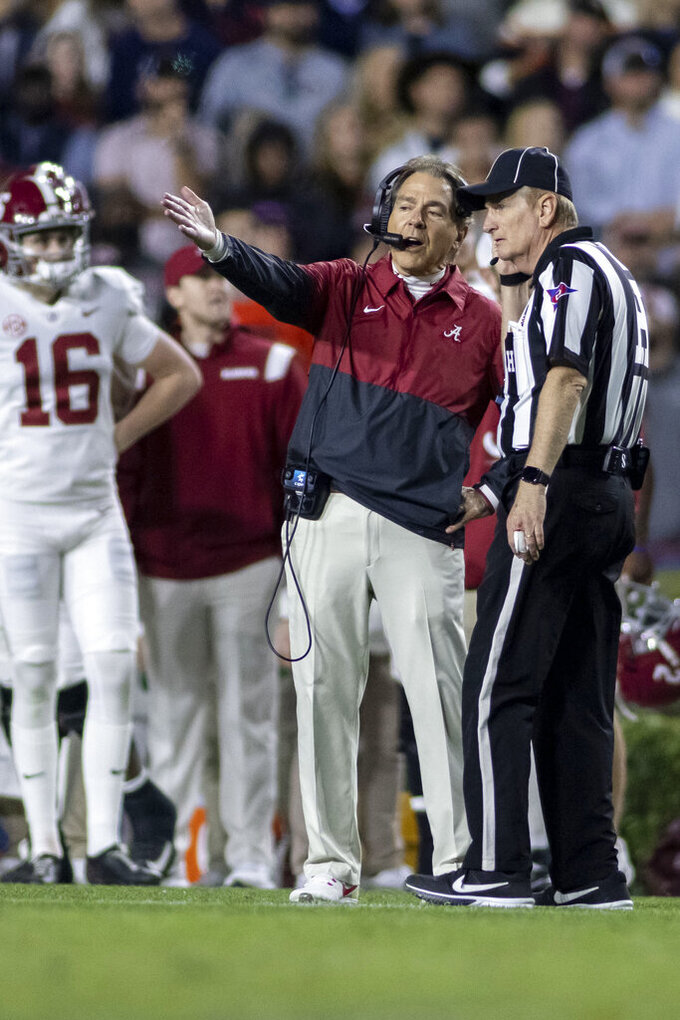 Alabama head coach Nick Saban argues a call during the second half of an NCAA college football game against Auburn, Saturday, Nov. 27, 2021, in Auburn, Ala. (AP Photo/Vasha Hunt) 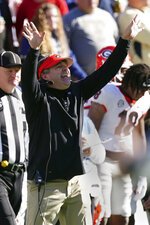 ATLANTA (AP) — Even with Georgia undefeated in 2021 and unanimous No. 1 in The Associated Press Top 25 for the eighth consecutive week, Nick Saban and Alabama still cast a shadow over the Bulldogs' season.

Alabama looms as the imposing barrier between the Bulldogs and their Southeastern Conference championship quest.

Georgia coach Kirby Smart insists the losing streak against Alabama has nothing to do with this year's team. Smart, the former Crimson Tide defensive coordinator, is 0-3 against his former boss, Alabama coach Nick Saban, in his six years at Georgia.

Saban also dismissed his team's recent winning streak against Georgia as having a role in this week's game.

Smart coached the Bulldogs to a 28-7 win over Auburn in the 2017 SEC championship game. It was Georgia's first SEC title since 2005.

Georgia, also No. 1 in the College Football Playoff ranking, is trying to position itself for a run at its first national championship since 1980.

An elusive win over Alabama would provide ideal momentum for Georgia in the College Football Playoff. The Bulldogs could lose to Alabama and still possibly make the four-team playoff, setting up a possible rematch.

Despite Alabama's recent mastery of the rivalry, Georgia is favored by 6 1/2 points, according to FanDuel Sportsbook.

“Georgia has been the No. 1 team in the country for good reason,” Saban said. “They’re probably the most consistent, most dominant team week in and week out. So obviously going to be our biggest challenge, toughest test of the year.”

Smart said Alabama is a “really good football program" and Saban “has done a great job over there.

“We’ve got a lot of respect for their team and the way they play and the style of play. As we all know, we’ve had some matchups in the past and look forward to this one. It’s a great opportunity for our guys to go out and play a really, really good football team. So I’m excited for that. I know our players are really excited.”