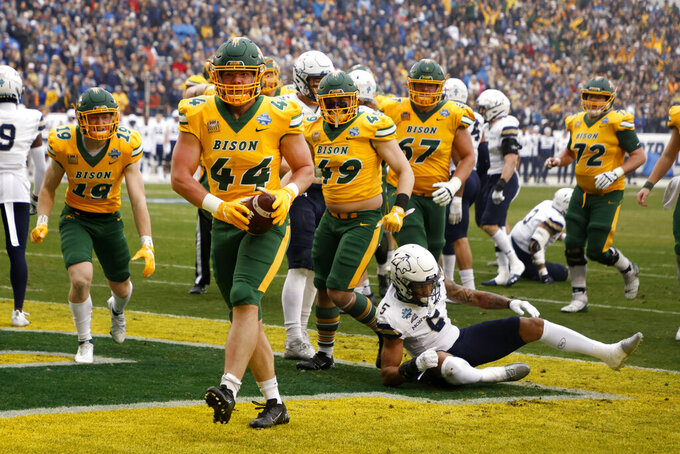 FILE - North Dakota State fullback Hunter Luepke (44) celebrates his touchdown against Montana State during the first half of the FCS Championship NCAA college football game in Frisco, Texas, on Jan. 8, 2022. South Dakota State and Sacramento State earned the top two seeds in the Football Championship Subdivision playoffs when the 24-team field was announced Sunday, Nov. 20, 2022. North Dakota State, the defending national champion and winners of nine of the last 11 titles, made the field for the 13th consecutive season. (AP Photo/Michael Ainsworth, File)

The odds appear to be stacked against unseeded Delaware when the Blue Hens travel west to face top-seeded South Dakota State in the Championship Subdivision playoffs this weekend.

Just over 18 months ago, when the pandemic pushed the FCS season into the spring, Delaware made the same trip in the national semifinals and was beaten 33-3.

This time, the Blue Hens (8-4) have Ryan Carty on their sideline.

The first-year Delaware coach was the offensive coordinator and quarterbacks coach at Sam Houston, which beat the Jackrabbits 23-21 to win the national championship in May 2021.

“Not anything that happened 18 months ago or a national championship in the spring or any of that stuff — It's not going to matter until we get out there and see how we perform and see how we rise to a challenge," Carty said this week. “Hopefully, attack.”

Carty does have one thing no South Dakota State player has ever been able to claim: The former quarterback won a national championship with Delaware as a player in 2003.

The Blue Hens advanced with a 56-17 victory against Saint Francis (Pa.) with Nolan Henderson throwing for four touchdowns and running for another, but they will be hard-pressed to match those numbers against the nation's No. 2 overall defense (255 yards per game), the No. 3 scoring defense (15.5 ppg) and the top rushing defense (71.4 ypg).

The Jackrabbits (10-1) haven't played since Nov. 12, and coach John Stiegelmeier used the break to practice sparingly for two weeks and send his team home for Thanksgiving.

“Legs are back. I think the biggest thing was not to practice football but to get away from football,” he said. “... So in my mind, the spirit, the energy, the bounce in your step is as important as your bench press and 40 times. So I feel good about that.”

The Jackrabbits have been ranked No. 1 for several weeks and are making their 11th consecutive postseason appearance. The top perch may have been heady stuff for a bit, the coach said, “but now we kind of settled in feeling like it’s a worthy ranking and it’s a worthy seed. So I think, again, we’ve got a really mature football team, so that helps.”

Richmond, like Delaware, is one of five teams from the Colonial Athletic Association that made the playoffs, and opened with a 41-0 victory over Davidson.

Their reward? A trip west to face second-seeded Sacramento State (11-0), the first team since Montana in 2006 to go 8-0 in the Big Sky Conference in back-to-back seasons. The Big Sky was also the only other league to get five teams in the playoff field.

The Hornets will pose ample challenges, Spiders coach Russ Huesman said, but the one that seemed to catch his eye most was running back Cameron Skattebo, the Big Sky's offensive MVP whose 1,251 rushing yards include just seven yards in losses.

“He’s the best we’ll play this year here and he's tremendous, powerful, tremendous balance. He had a run against Eastern Washington that was probably the most incredible run that I’ve seen on film this year for sure and in a long, long time,” Huesman said.

The Hornets have never won the national title; Richmond won it in 2008.

An average of 69 points were scored in the eight first-round games, including New Hampshire's 52-42 win against Fordham, Gardner-Webb's 52-41 win against Eastern Kentucky and Southeast Louisiana's 45-42 victory against Idaho.

“If you’re going to get to Frisco, you’re not going to just outscore people. You got to play some good defense,” he said.

LET'S DO IT AGAIN

Besides Delaware and Richmond, former champions still in the field include defending champion North Dakota State, winner of nine of the last 11 titles, Furman (1988) and Montana (1995, 2001).

“If I wasn't coaching I'd be out shooting pheasants in this weather.” — Stiegelmeier, explaining that deer and pheasant season in South Dakota could lead to a smaller crowd at Saturday's game.