Holgorsen back to future as No. 25 Houston visits Texas Tech 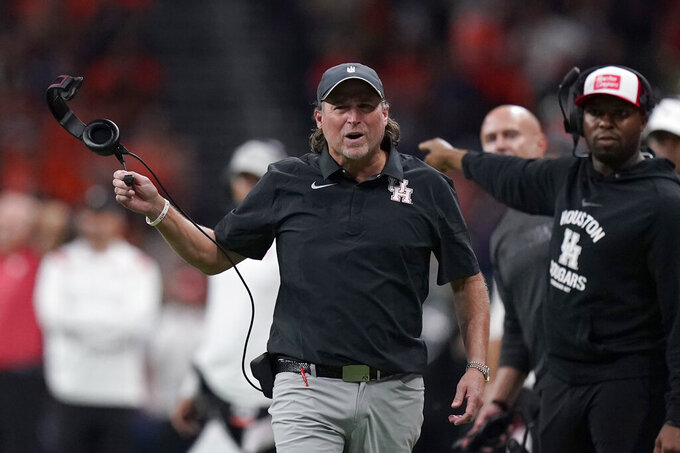 Houston coach Dana Holgorsen reacts to a call during the second half of the team's NCAA college football game against UTSA on Saturday, Sept. 3, 2022, in San Antonio. (AP Photo/Eric Gay)

LUBBOCK, Texas (AP) — Houston coach Dana Holgorsen knows where he used to be and where he's going.

The former West Virginia coach is only concerned with the present for the 25th-ranked Cougars (1-0) going into Saturday's final meeting with ex-Southwest Conference rival Texas Tech before they are in the same league again in the Big 12 starting next year.

Among Holgorsen's more immediate thoughts before a return to familiar Big 12 territory: Houston winning the conference title in its last American Athletic season.

First-time college head coach Joey McGuire might bring it up to his Red Raiders (1-0). Houston is the first Lone Star State opponent for the lifelong Texan who was a Baylor assistant for the past five years after winning three high school state championships.

“Houston, they are a Big 12 opponent,” McGuire said. “This is not a Group of Five team or a lower-level team. “This is a conference opponent, just getting to play it a year earlier. I’m excited about that.”

As for Holgorsen, he might bring up last year's 38-21 loss to Texas Tech in the opener, which ended his personal five-game winning streak against the Red Raiders from his Big 12 days with the Mountaineers before leaving for Houston.

He wasn't happy about the loss at the time, and even less so after Houston ran off 11 consecutive victories before losing to then-undefeated Cincinnati in the AAC championship game.

Nathan Tune tied a career high with four interceptions in that loss. So the coach isn't the only one seeking a little payback.

“Coach McGuire's got that place excited,” Holgorsen said. “We've got an old team that has been in some of those type games a lot. The last two games of the year last year were pretty challenging road atmospheres. At Cincinnati, it was electric.”

Both teams won their openers, but in quite different ways. The Cougars converted their 2-point conversion in the second overtime and stopped UTSA's try for a 37-35 victory. The Roadrunners won their first 11 games last season.

The Red Raiders scored touchdowns on their first eight possessions in a 63-10 victory over FCS Murray State.

Donovan Smith is the likely starter with Tyler Shough sidelined for the second consecutive year with a left shoulder injury. Smith threw four touchdown passes against the Racers after replacing the injured Shough.

Smith was expected to play anyway, as was now-No. 2 Behren Morton. All three had TD passes against Murray State, a first for the Red Raiders going back to the start of their pass-happy offense in 2000. Tahj Brooks ran for three scores.

“You'll see both quarterbacks this week,” McGuire said of Smith and Morton. “They're excited about that. I think they were locked in (last week).”

Holgorsen was an assistant under Mike Leach at Texas Tech from 2000-07. The first five years were as inside receivers coach, followed by a season as co-offensive coordinator and two more with that title to himself.

He had regular visits to Lubbock with the Mountaineers, and will again as long as he's with the Cougars. Holgorsen had to mention the strange tradition of Texas Tech students tossing tortillas during games.

“It's an awesome place. I've got a lot of memories there,” Holgorsen said. “They used to throw the tortillas on my way up to the press box, so now I'm getting hit by them. But that's cool. As long as they're not slapping me with them.”

The Cougars lost two major contributors to their 100 tackles for loss, and 44 sacks, last season as defensive linemen Logan Hall and David Anenih moved on to the NFL. D’Anthony Jones, who had seven sacks, and Derek Parish, who had five, are back.

Texas Tech edge rusher Tyree Wilson was the Liberty Bowl defensive MVP and finished with 13 1/2 tackles for loss and seven sacks. Philip Blidi had two sacks in the opener.