Iowa, Kentucky will meet for the first time in Citrus Bowl 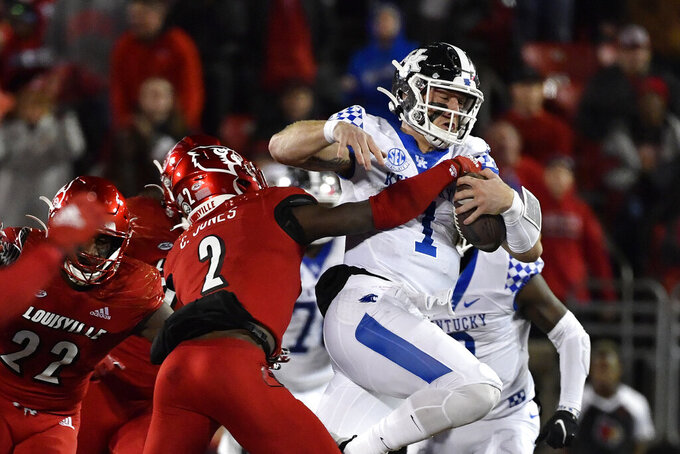 Kentucky quarterback Will Levis (7) is grabbed by Louisville defensive back Chandler Jones (2) during the first half of an NCAA college football game in Louisville, Ky., Saturday, Nov. 27, 2021. (AP Photo/Timothy D. Easley)

Kentucky: Quarterback Will Levis, a Penn State transfer, threw for 2,593 of his 2,980 yards and 23 of his 32 total touchdowns. Chris Rodriguez Jr. added 1,272 yards rushing and eight TDs and Wan’Dale Robinson 1,164 yards receiving and three TDs.

Iowa: Junior back Tyler Goodson rushed for 1,151 yards and six TDs. Defensive back Dane Belton is tied for second nationally with five interceptions. Linebackers Jack Campbell and Seth Benson had 126 and 95 tackles, respectively.

Kentucky: The Wildcats began 6-0 before finishing 9-3 for the first time since 2018 and just the second since 1977. Their start included consecutive upsets of Florida and LSU, outcomes that ultimately contributed to the respective firings of coaches Dan Mullen and Ed Orgeron. Wildcats coach Mark Stoops played at Iowa in the late 1980s under Hayden Fry before becoming a Hawkeyes graduate assistant.

Iowa: The Hawkeyes are coming off a 42-3 loss to No. 2 Michigan in the Big Ten championship game. They won the Big Ten West Division thanks to a defense that ranked 14th nationally in scoring (19.2 points per game) and 15th against the run (113.8).

Iowa: Second Citrus Bowl appearance and first since topping LSU 30-25 in 2005 with a 56-yard TD pass on the game’s final play. The Hawkeyes have recently lost four of five to SEC foes in bowl games but beat Mississippi State in the 2019 Outback Bowl.

By John Coon 28 minutes ago
By Joe Reedy And Ralph D. Russo an hour ago
By Cliff Brunt 20 hrs ago
By Dave Skretta 23 hrs ago
By The Associated Press 24 hrs ago