Lake stays mum on Washington's starting QB ahead of opener 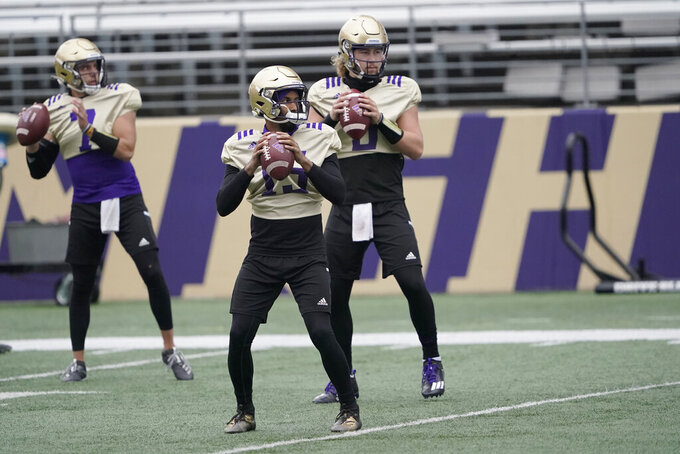 SEATTLE (AP) — This much is clear about Jimmy Lake’s debut as the head coach at Washington, he’s not going to share any information about who his starting quarterback will be ahead of Saturday’s opener at California.

“Great question. I guess we will find out about 7:34 p.m. Pacific time, right around there on Saturday night,” Lake said Monday.

No bigger question surrounds Lake’s first game in charge of the Huskies than who will be under center against the Golden Bears. After several weeks of practice and a few scrimmages, Lake is still keeping the decision under wraps as to which of his four options will take that first snap.

The favorite from the start has appeared to be graduate transfer Kevin Thomson simply because he has the most experience. Thomson was the Big Sky Conference offensive player of the year last year at Sacramento State before deciding to transfer back home to finish his college career at Washington.

Thomson threw 450 passes and 27 touchdowns in 2019 alone. Washington’s other three QB options — Jacob Sirmon, Dylan Morris and Ethan Garbers — have combined to throw three passes in college, all of them by Sirmon last season.

Whoever the starter ends up being will be directing a new offense under first-year offensive coordinator John Donovan. Lake has also said the Huskies could use multiple QBs to start and all four were listed as potential starters on the official depth chart.

Washington has been blessed with experience at the position for years. Jake Browning was a four-year starter at quarterback for the Huskies and Jacob Eason brought one year's worth of experience starting in the SEC when he took over for Browning last season.

Lake said his decision to not announce the starter comes simply from a competitive standpoint. His predecessor, Chris Petersen, did the same ahead of Browning’s first game in 2015.

“I know our fans are excited. And believe me, we’re all excited. We can’t wait to go out and run out there on Saturday night and play really hard for you guys,” Lake said. “But what we’re never going to do here is release information that hurts us. And by us releasing that type of information only hurts us, it doesn’t help us."

Lake has been a defensive coach his entire career and having more insight into what is happening offensively is a change he’s welcomed. Lake said he’s been able to provide the perspective of what might cause headaches for opposing defenses.

“It’s one of our anchors around here is constant growth and improvement,” Lake said. “I’ve really enjoyed that aspect of being able to be with the offensive coaches and just lend a hand the way I can and say, ‘Hey, you know what if you do this, this causes issues. This is extremely difficult, and the defense is going to see it this way.’ They’ve listened and it’s been definitely a joy and a different perspective for me.”