Let's play 2: Baseball, football combo tests few who do both 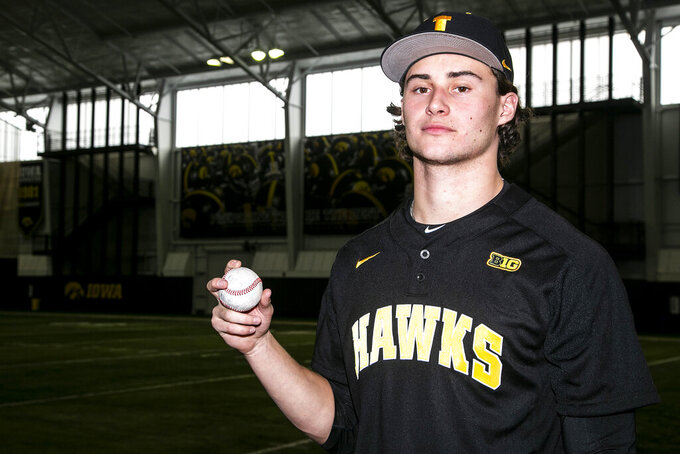 FILE - Iowa pitcher Brody Brecht poses for a photo during an NCAA college baseball media day, Feb. 10, 2022, at the University of Iowa Indoor Practice Facility in Iowa City, Iowa. The Iowa freshman is working double-duty this spring  as a pitcher on the baseball team and a wide receiver on the football team. (Joseph Cress/Iowa City Press-Citizen via AP, File)

IOWA CITY, Iowa (AP) — Brody Brecht's schedule is so full, sometimes he writes notes to himself to make sure he's where he needs to be and when.

The Iowa freshman is working double-duty this spring. He's a pitcher on the baseball team and a wide receiver on the football team.

With baseball in season and football going through spring practice, it's all about time management.

“You kind of have to prioritize,” Brecht said. “And you also have to make time for academics, because those are important, too. It’s about getting done what you need to get done.”

Brecht is among at least a half-dozen Division I athletes who are playing baseball and participating in spring football simultaneously this year, according to conference and school sports information directors who responded to an Associated Press survey.

At least another dozen athletes play baseball and football, but were either injured or not participating in spring football this year.

Iowa's Brecht has a high ceiling in both sports.

Brecht, who is on a football scholarship, was projected as a high-round pick in last summer’s Major League Baseball draft, but he made it clear he wanted to play two sports for the Hawkeyes.

“He’s a mature kid and he handles his business off the field extremely well,” Iowa baseball coach Rick Heller said.

The 6-foot-4, 205-pounder from Ankeny was the 2021 Gatorade state high school baseball player of the year and has established himself in the Hawkeyes' bullpen. He's 1-2 with a 2.65 ERA and 31 strikeouts in 17 innings over 11 appearances. His fastball has topped 100 mph 21 times this season.

In football, he was a two-time first-team all-state selection and as a senior was a 247Sports composite three-star recruit. He didn't appear in a football game for the Hawkeyes last season, mostly because of a thumb injury that set him behind, but he's in contention for a starting wide receiver job this fall.

There is a balancing act with baseball and spring football going on at the same time.

Brecht’s football work in the spring is non-contact, but he does go through weight training, meetings with coaches and route running drills with the other receivers and quarterbacks.

“When he can, when he’s available, he’s practicing with us," Copeland said.

Raimond Braithwaite, the football team's strength and conditioning coach, understands the challenges Brecht faces and is flexible. Some days Brecht will tell Braithwaite that the baseball team will return from a road game in the wee hours and that it might be better for him to sleep instead of doing a football weight workout that could start as early as 6 a.m.

“That makes a ton of sense," Braithwaite said, adding that it would be counterproductive for an athlete in Brecht's position to overextend himself physically. "So we have to be very intelligent in what we do with him.”

Brecht has progressed well in his first season of college baseball. He struck out seven in four innings against Ball State in his first appearance, and in his first home game his first three pitches clocked over 100 mph.

Brecht has been at his best the last two weeks, allowing one hit while striking out 16 in 8 1/3 innings.

Brecht’s two-sport success started in high school. He was 10-0 with a 0.56 ERA as a senior, striking out 126 in 61 1/3 innings in leading Ankeny to the Iowa Class 4A state semifinals in 2021. That came after a football season in which he had 42 catches for 599 yards and 12 touchdowns, helping Ankeny win the 2020 Class 4A state championship.

Brecht’s schedule will be busy in the summer, too.

He considered playing baseball in the Cape Cod League, but that would have kept him out of the football team's summer workouts. So he will remain on campus for football workouts and drive 90 miles on days he'll pitch for the Clinton LumberKings in the Prospect League.

“I’ve been doing this my whole life,” Brecht said. “I wouldn’t be doing it if I wasn’t having fun and if I didn’t love it. But I’m having fun.”