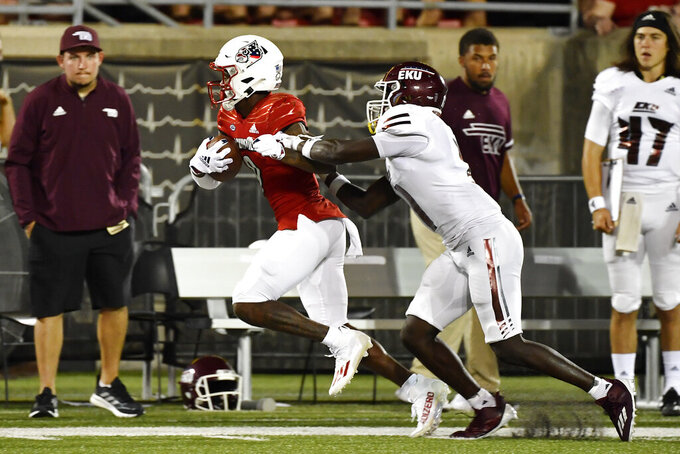 LOUISVILLE, Ky. (AP) — Louisville is looking to cap off another short week of preparation with its second straight win.

The Cardinals (1-1) will need to be quick on both sides of the ball to keep pace with UCF on Friday night. The Knights haven’t allowed opponents time to adjust to their fast-paced offense. They’re averaging nearly 86 plays, 50 points and 681 yards per game, posing an even bigger task for a Louisville defense that couldn't keep up with Mississippi in a 43-24 loss in the season operner.

“They move really fast and are not worried about trying to get the best play like some teams,” Louisville coach Scott Satterfield said this week in comparing the Knights’ tempo to the Rebels. “They run fast plays and hope to catch the defense not lined up.

“Hopefully we learned some things to do good and correct from the Ole Miss game.”

Louisville bounced back with Saturday’s 30-3 victory over FCS Eastern Kentucky, the second of three contests over a 12-day stretch. Quarterback Malik Cunningham passed for two of his three touchdowns as the Cardinals nearly doubled up the Colonels in yardage (441-235). Braden Smith's 49-yard punt return for a touchdown demonstrated their big-play potential.

Though Louisville remains a work in progress as the Cardinals try to establish a rhythm, evidenced by Ahmari Huggins-Bruce's fumble at the 1 on what would have been a 95-yard TD reception.

“We should start fast and stay consistent," receiver Justin Marshall said. “No waving up and down.”

Meanwhile, UCF enters its first road game seeking a win over a Power Five school, which could help the Knights crack the AP Top 25 after just missing out last week.

UCF hired former Auburn coach Gus Malzahn during the offseason and is still fielding the same high-octane unit in recent years. The Knights have outscored opponents 99-45, a number skewed a bit by last week’s 63-14 shellacking of FCS Bethune-Cookman.

Of course, the Knights might have had a little extra motivation a day after becoming a future Power Five school themselves. UCF accepted an invitation from the Big 12 Conference to join by July 2024.

One of three American Athletic Conference schools invited last week along with BYU, the program has been eager to prove it can compete regularly in a Power Five league.

Malzahn cautions that that’s a few years away — maybe sooner — and that his team must focus on the present. Which happens to be UCF's only Power 5 opponent this season.

“It’ll be a really good test of where we’re at,” said the coach, who could earn his 80th career win. “Just looking forward to seeing how our guys respond on the road against a very solid team.”

Some other things to watch as Louisville hosts UCF:

UCF quarterback Dillon Gabriel has continued his 2020 performance in which set a school record with 357 yards passing per game to lead the nation. The junior is averaging 315 yards through two contests and ranks top-10 in several categories including touchdowns (six) and total offense (368.5 yards).

For all the things the Cardinals did right against EKU, Satterfield lamented that the ground game has yet to break a run of at least 50 yards, which happened five times last season. Jalen Mitchell had two of those and showed he can handle the load after rushing for 90 yards on 18 carries against EKU. Yards could be tough regardless against a UCF defense ranked second nationally against the run at 22 yards per game.

UCF aims to record its first sack, and the Knights have certainly tried. They've recorded 12 tackles for loss (ranked 65th) with 13 quarterback hurries, an effort they believe will eventually pay off.

Said Malzahn, “I’m confident we’ll finish that next time we have the opportunity."

Louisville is seeking improve on third-down efficiency after converting just 4 of 14 opportunities against EKU. That certainly won’t get it done against the Knights, who have held opponents to a 38% conversion rate on the money down and given their offense opportunities to convert 57%.

Friday will mark just the third meeting between the former schools that were co-members of the AAC in 2013 before Louisville joined the ACC the next year. The Knights tied the series by dealing the then-No. 8 Cardinals their lone loss (38-35) that season, a game that matched future NFL QBs with the Cardinals’ Teddy Bridgewater and UCF’s Blake Bortles.