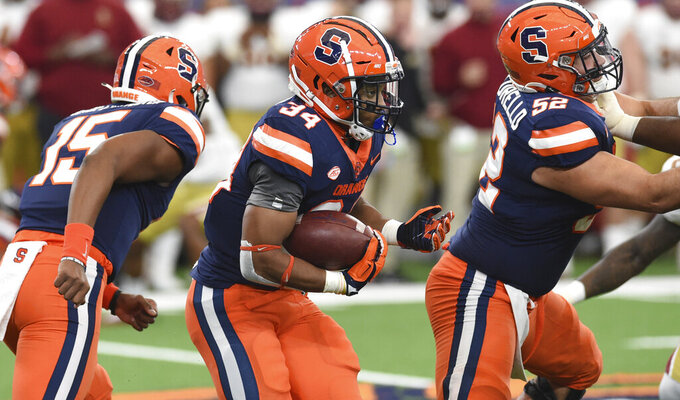 Syracuse running back Sean Tucker (34) runs against Boston College during the first half of NCAA college football game, Saturday, Nov. 7, 2020, at the Carrier Dome in Syracuse, N.Y. (Dennis Nett/The Post-Standard via AP)

Tough as this unusual season has been for Louisville and Syracuse, the final weeks offer both schools a chance to finish strong.

The question is which one takes a step toward building it in Friday night’s meeting of one-time winners in Atlantic Coast Conference play.

Though Louisville (2-6, 1-6) is assured of its second losing season in three years, the goal is close to .500. With more players available since a recent coronavirus outbreak resulted in a meeting at Virginia being postponed to last weekend — a 31-17 loss — the Cardinals feel encouraged about the stretch run.

“So much of what we’re going through with the wins and losses doesn’t have to do with effort,” Louisville coach Scott Satterfield said this week. “A lot of it is just the mistakes that we’ve had. We’re just trying to stay positive when they come into the building and to keep moving forward. Another opportunity again this week against Syracuse, and we’re looking forward to that.”

Indeed, Louisville’s prospects hinge on avoiding turnovers that have contributed to consecutive losses to Virginia Tech and the Cavaliers.

The Cardinals have committed three each in both contests, leading to 24 combined points. Those freebies have offset impressive offensive efforts in which they’ve outgained both opponents with at least 478 yards.

“A lot of times when you see turnovers, you see guys trying to do a little bit extra,” offensive coordinator Dwayne Ledford said. “We as an offense have to do a better job of making sure that we keep those fundamentals of taking care of the ball.”

The Orange have scored 14 points or fewer in four of their losses and are averaging just 18.3 points per game to rank 113th nationally. Injuries have also taken a toll on the front line and have sidelined starting quarterback Tommy DeVito for the past four games and likely the rest of the season.

With upcoming games against North Carolina (6-2) and first-place and No. 2 Notre Dame, Syracuse needs to seize any advantage it can get against a Louisville squad that’s also struggling.

“We’re planning on playing the best we can,” defensive lineman Kingsley Jonathan said. “We’re going out to finish the season good.”

Some other things to watch as Syracuse visits Louisville:

Louisville and ACC rushing leader Javian Hawkins (822 yards, seven touchdowns) announced Monday that he will opt out the rest of this season to prepare for the NFL. The Cardinals' upside is they're coming off a 317-yard rushing performance without him and will have Hassan Hall back after he missed last week’s game to attend a family funeral. Quarterback Malik Cunningham carried the load with 197 yards and two TDs, but Jalen Mitchell (seven carries, 76 yards) and Maurice Burkley (12 for 44 yards) helped that effort.

Syracuse is expected to start freshman quarterback JaCobian Morgan for the second consecutive game. He was 19 of 30 passing for 188 yards, a TD and an interception in a 16-13 loss to Boston College in his first collegiate start. He also was sacked four times in that setback nearly two weeks ago but has had the bye to become more familiar with the playbook.

Louisville receiver Tutu Atwell is listed as the starter after missing the Virginia game with what Satterfield said afterward was COVID-19 related. The coach added this week that Atwell is also dealing with an unspecified injury but suggested that he’s “really close” to playing.

Syracuse has excelled on Friday nights under coach Dino Babers with five wins in its last six games and a 6-2 overall mark in his five seasons. Topping the list is a 27-24 win against second-ranked Clemson in 2017.

The winner has scored at least 54 points in each of the past four meetings, including Louisville’s 56-34 victory last year. That might be asking a lot from both teams, though the Cardinals have averaged 41.5 points in their two wins.