More than wins, losses at stake as basketball season arrives 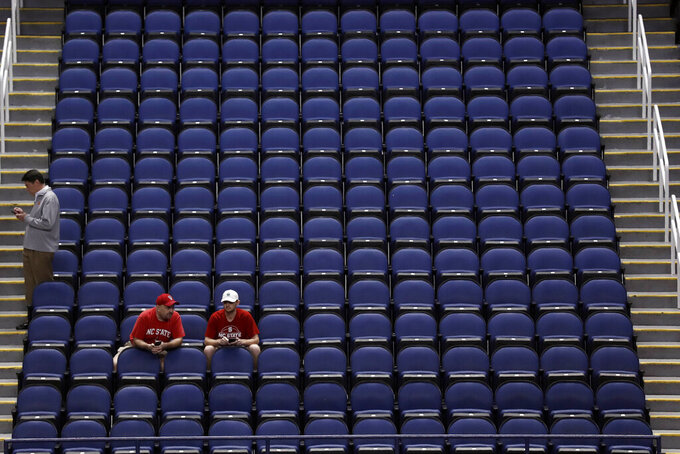 FILE - In this March 12, 2020, file photo, fans sit in a mostly empty Greensboro Coliseum after the NCAA college basketball games were cancelled at the Atlantic Coast Conference tournament in Greensboro, N.C. Scrubbing last year's March Madness due to coronavirus concerns cost the NCAA some $375 million, and another loss like that would have ripple effects throughout college sports. (AP Photo/Gerry Broome, File)

As more than 300 teams prepare to start a season that will look nothing like any before it, the conversation isn't so much about who will be cutting down the nets at the end of March Madness as much as whether anyone will cut down the nets at all.

If some team, any team, does climb a ladder in Indianapolis — and the top candidates include the usuals, with No. 1 Gonzaga, Duke, Kentucky and Kansas among them — then consider the season a success.

Anything short of that, and nothing less than the future of college sports could hang in the balance.

This is the new world created by a COVID-19 crisis that is mushrooming to more than 190,000 new cases a day across America just as college basketball gets set to tip off its season Wednesday.

Teams will play truncated schedules — many cut from 31 to 27 or 25 games — after truncated preseasons. It's a shrunken, ever-shifting and still perilous grid laid out with the health of players and coaches in the forefront of everyone's mind, but with an unspoken belief that the show really does need to go on.

The end game is the 68-team extravaganza known as March Madness, the event that was wiped off the calendar eight months ago in a stunningly rapid turn of events as the seriousness of the pandemic set off alarms across the U.S. It cost the NCAA around $375 million, and sent shockwaves around the entire college sports landscape.

“The bottom line is that American higher education, not just athletics, is hemorrhaging like never before,” Duke athletic director Kevin White said earlier this fall to the U.S. Olympic and Paralympic Committee, of which he is a member.

The NCAA is already making plans to turn this year's postseason into something much different, and much less, than it has been in the past — proposing to hold all games in a single city, most likely Indianapolis, which is where the Final Four is already scheduled for April 3-5.

Though a vaccine appears to be on the way, there's a good chance that in March, fans and bands and mascots will largely miss out, much the way they've been missing out inside arenas and stadiums that have hosted recent NBA, MLB and NHL seasons, as well as the current and oft-interrupted college and pro football schedules.

But the reality is, the people college basketball really needs at the arenas are the TV crews.

CBS and various cable affiliates are scheduled to pay around $800 million this season to televise America's most frenetic sports celebration for three weeks each March and April. That's on top of the millions the biggest conferences generate in media revenue during the regular season.

Most of it is money earmarked for distribution by the NCAA and the conferences to the schools, which combine hoops and football revenue to fund smaller sports in their programs. A staggering 116 of those programs have been cut from 34 schools at the Division I level since pandemic hit, according to the USOPC, whose very ability to field an Olympic team is largely dependent on the college system.

Another year like that would have the potential to mark the beginning of the end of the college sports system as we know it.

“When you look around the country, this has potential to force some schools to recalibrate what they’re capable of supporting,” said John Tauer, the coach at St. Thomas, the Minnesota school that is moving from Division III to Division I. “It's a complicated question that every school is going to answer differently.”

So, how to get from November to March?

The Ivy League has already bagged it, canceling all winter sports, which means there will be no Harvard or Yale come tournament time, and none of those eminently entertaining stories about how smart guys can play hoops, too.

Most everyone else is planning a season. Many teams are planning shorter road trips and a smaller footprint. No trip's success — not even that of a quick bus ride — will be taken for granted. Testing protocols are in place and, as the college football season has shown us with the cancellation of a handful of games every weekend, all participants will need to be able to adjust on the fly.

When teams do start playing, some of the top players to watch will be Jared Butler (Baylor), Cade Cunningham (Oklahoma State), Ayo Dosunmu (Illinois) and Luka Garza (Iowa).

Garza averaged nearly 24 points and 10 rebounds as a junior last season. The pandemic complicated his decision about whether to stay in school or go pro. He will now enter the season as one of the rarest birds in the college basketball ecosystem — a senior who also has NBA lottery potential.

A mere eight months ago, those kind of issues — namely, the mass migration of players to the NBA after a single year of college, or no college at all — fueled that perennial cauldron of debate about the overall health of the sport and the need for reforms.

Though there's always a lot of hand-wringing about the outsized role of money — passed both legitimately and under the table — in college basketball, there is no debate about this: Without any games, the money will dry up and college sports as we know it will be reshaped, too.

And so, even with positive cases of the virus surging and the health risks as dire as they've ever been, teams scurry to fill in blank spots on their schedules and get ready to put on a show. There was no Midnight Madness to mark the first practices of the season, but that was never the goal.

The goal is March Madness — even if it's a TV-only event.