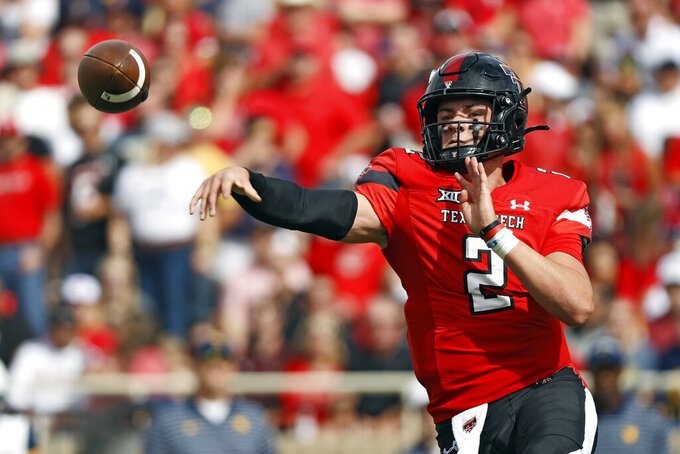 Coming off a bye week and playing in Lubbock for the first time in nearly a month, the Red Raiders (4-3, 2-2 Big 12) scored 17 points off of turnovers, broke a two-game losing streak and improved to 3-0 at home.

Texas Tech seized control with touchdowns on its first two drives and the Red Raiders’ high-tempo offense kept West Virginia off balance. Texas Tech surpassed 100 offensive plays, including 55 in the first half when it converted six of seven times on fourth down.

“I was proud of this team for bouncing back,” Texas Tech coach Joey McGuire said. “I was really proud of the way they responded, how fast we played. I thought they showed what kind of shape our guys are in.”

Brooks had 17 carries for a season-high 107 yards, including first-quarter TD runs of 1 and 19 yards.

Morton, a redshirt freshman, was solid again in his second straight start. He completed 28 of 45 passes for 325 yards after throwing for 379 two weeks ago in a loss at No. 11 Oklahoma State.

McGuire said Morton, who had been nursing a sore ankle, woke up sick on Saturday. McGuire said Morton's performance was a testament to the team's medical staff to get him ready to play. Upon learning that Morton was throwing up, McGuire recalled that head athletic trainer Andrew Krueger told him, 'Well, he probably won’t worry about his ankle today, so that’s probably a good thing.’

“He gets an IV before the game and comes out and does everything we ask.”

After Texas Tech’s Malik Dunlap intercepted an underthrown ball on West Virginia’s first drive of the third quarter, the Red Raiders’ Xavier White caught a pass from Morton and weaved 37 yards through traffic for a 55-yard touchdown.

White later had a 27-yard catch along the sideline to set up Morton’s 12-yard scoring toss to Loic Fouonji for a 31-3 lead. White had eight catches for a career-high 139 yards.

Texas Tech entered the game with one of the worst turnover margins in the Bowl Subdivision. The Red Raiders intercepted three passes and recovered a CJ Donaldson fumble near midfield. After the fumble recovery, SaRodorick Thompson scored on a 13-yard run for a 38-10 lead to start the fourth.

It marked the fifth road loss of at least 25 points for West Virginia under fourth-year coach Neal Brown.

“Not a whole lot to say. That’s complete domination," Brown said. "Probably as disappointed as I’ve ever been as a football coach in my entire career, especially in the second half. We played about as bad as we possibly can play the game of football today.”

West Virginia: Injuries on offense hampered the Mountaineers, who were held to a season-low 282 yards. Starting left guard James Gmiter sat out and left tackle Wyatt Milum left the game with a lower leg injury in the third quarter. Running backs Justin Johnson and Tony Mathis sat out the second half. The Mountaineers fell to 1-3 on the road and now must win three of their remaining five games to become bowl eligible.

Texas Tech: The Red Raiders beat West Virginia for the fourth straight meeting. Three of those came after the Red Raiders had a bye week.