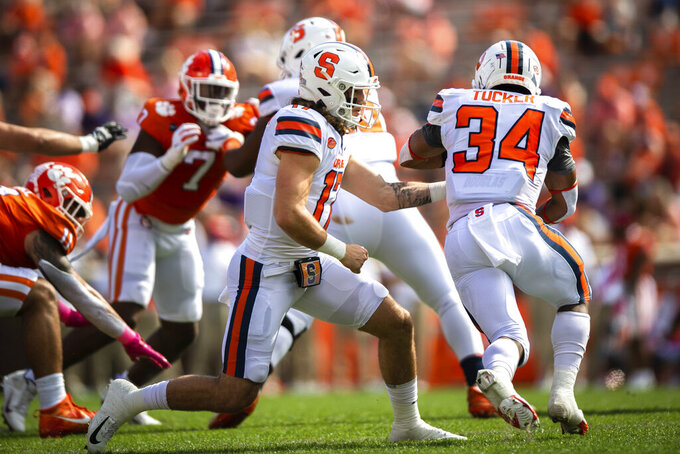 CLEMSON, S.C. (AP) — Trevor Lawrence has seen plenty of tight games against Syracuse. He's also seen the top-ranked Tigers come out on top most every time.

It happened again Saturday as No. 1 Clemson used a late boost to pull away to a 47-21 victory after Syracuse drew within a score at 27-21.

“Every year they play us tight,” Lawrence said, “and they have a lot of confidence from that.”

What Syracuse doesn't have is playmakers like Lawrence and tailback Travis Etienne. Lawrence threw for two touchdown passes and Etienne ran for three scores, two in the fourth quarter, as Clemson won its 27th straight Atlantic Coast Conference game — since falling to the Orange 27-24 in 2017.

Syracuse (1-5, 1-4), a 45-point underdog, rallied from 17-0 down to draw within a touchdown late in the third quarter before Clemson regained its footing.

“There are a lot of teams that would've lost that game with the mistakes that we made," Clemson coach Dabo Swinney. "I was proud of our guys for winning the game.

“We're 6-0 because we've played really well to this point,” he continued.

It was the sixth straight season the Tigers (5-0 ACC) opened with six wins. Although, it took a late burst to get it done — just like usual against Syracuse.

A season after Syracuse's surprise win in 2017, the Orange again looked primed for the upset as they held a 10-point lead in the fourth quarter before Clemson's 27-23 escape to keep its national championship season intact.

Syracuse and coach Dino Babers kept the Tigers out of synch much of the game.

“I don't know what it is with the Orange vs. the Orange,” Babers said.

The Syracuse Orange couldn't finish this one off, however.

The Tigers broke fast for a 17-0 lead less than 11 minutes into the game. That's when things got away from the five-time defending ACC champion.

Syracuse freshman Drew Tuazama blocked a punt and four plays later Sean Tucker scored on a 7-yard run. Then right before half, Orange cornerback Garrett Williams caught a pass off Amari Rodgers' hands and took it 39 yards for a pick six.

Lawrence had gone 12 games without throwing an interception before the streak ended last week against Georgia Tech.

Syracuse made it a one-score game when Nykeim Johnson caught an 83-yard TD pass from Culpepper to draw within six points— and stun the crowd of about 19,000 before Booth's defensive score got the Tigers rolling to victory.

“We’re still upset about the fact that we didn’t finish the game because we had an opportunity to beat them,” Williams said. “It really gave us just another jolt to really believe in each other again.”

Clemson offensive coordinator Tony Elliott said the Tigers were not sharp as in last week's rout of Georgia Tech, yet still found a way to win the game — something that will serve them well going forward as they face the harder part of of the season in November and December.

Clemson must head to No. 3 Notre Dame, to Florida State and to No. 19 Virginia Tech in its four games after October.

“We’re not entitled to roll the ball out there and win,” Elliott said. "Nobody’s going to lay down for us.”

Syracuse: How to explain the Orange? There seemed no way Syracuse should be in position to scare the Tigers, yet it had its chances late. Babers is going to have to channel this effort the rest of the season if the Orange hope to get out of the ACC basement.

Clemson: The Tigers have one of these showings every year, it seems. A season ago, they needed a late stop to hold off a North Carolina comeback with a 21-20 victory. The two years before that, it was struggling against Syracuse. Clemson also generally finds its fire — and its way to the ACC title and College Football Playoff.

There were a few worries at Death Valley when Etienne headed to the locker room in the third quarter. Turns out, he needed a better start. Etienne said he received an IV to deal with cramping muscles — and he blamed it partly on not eating a proper, substantial breakfast. Etienne said he had a simple bowl of cereal that was not hearty enough to sustain him for a noon game. He said he'll make sure he's fortified next week with eggs and sausage when the Tigers face Boston College early next Saturday.

Clemson was without three defensive starters in linebacker James Skalski, tackle Tyler Davis and cornerback Derion Kendrick. Skalski and Davis were listed as unavailable before the game with injuries. Kendrick was dressed out on the sidelines and never got in with a groin issue, Swinney said. Syracuse was without leading receiver Taj Harris, left at home as discipline for using an obscene gesture at the camera in a home loss to Liberty last week.

Clemson finishes a two-game homestand with Boston College on Saturday.