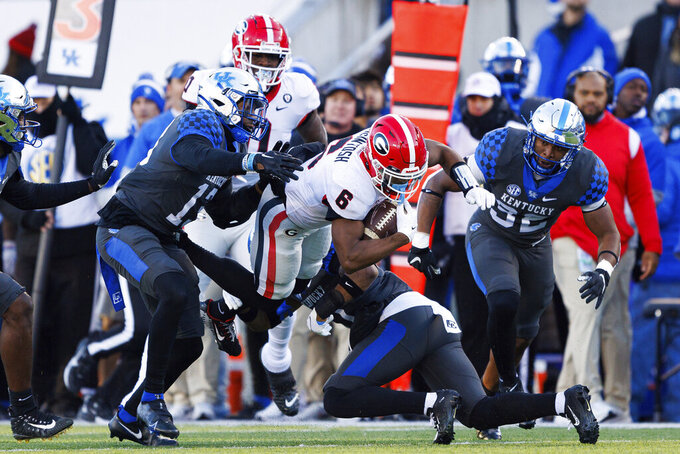 Georgia running back Kenny McIntosh (6) is brought down during the first half of an NCAA college football game against Kentucky in Lexington, Ky., Saturday, Nov. 19, 2022. (AP Photo/Michael Clubb)

When running onto the field in last week's 16-6 win at Kentucky, Podlesny noticed Bennett was more upbeat when holding for extra points than for field goals. That just meant Bennett and the offense had failed to find the end zone.

No. 1 Georgia (11-0, 8-0 Southeastern Conference) protected its unbeaten record and capped an unblemished mark in the league. Even so, the Bulldogs were far from perfect in short-yardage situations while having to rely on three field goals.

“Definitely running out onto the field, I can remember the third or second field goal specifically, he’s out there and he’s just shaking his head,” Podlesny said of Bennett on Monday. “He’s like: ‘This isn’t great. This isn’t seven points. This is only three.’"

Running back Kenny Milton was stopped for no gain on a fourth-and-one play to open the fourth quarter. Georgia also couldn't convert two third-down plays when it needed only one and two yards in the final quarter.

The short-yardage offense will be an emphasis in practice this week for Saturday's regular-season finale against Georgia Tech, which gained momentum with last week's 21-17 win at then-No. 13 North Carolina.

Georgia coach Kirby Smart says he looks to “be creative” when devising the best short-yardage plan.

“You have to sit and think, are we in the best personnel grouping to do it?” Smart said Monday. “Are we giving it to the right side? Are we attacking the weakness of their defense? ... Are we in our best personal grouping? Do you have to get big to get one yard or can you stay little and can you spread them out?”

The Bulldogs still had enough offense to hold on against Kentucky, but 16 points may not be enough against Georgia Tech or in the Dec. 3 SEC championship game against No. 6 LSU. Georgia, also No. 1 in the College Football Playoff ranking, is looking to regain its offensive momentum for a run at a second consecutive national championship.

The Bulldogs scored their only touchdown against on a 9-yard run by Kenny McIntosh. It was not a typical performance for the Bulldogs, who rank 11th in the nation with their average of 38.4 points per game.

Georgia leads the nation in red-zone scoring efficiency. The fourth-down stop was only the second time the Bulldogs have failed to score in 61 red-zone possessions. The one negative for Smart in that statistic is having to rely on field goals in 19 of the 59 red-zone scores.

“We took a step back, you know, last week,” Smart said. "And the level of concern is about execution. It’s not like you can say it’s one thing or oh, you have a problem here. ... Every play we can point to and say we have a failure here. And when you have a failure here, we don’t execute. You play good defenses, they capitalize on you.”