No. 12 BYU heads to Oregon looking to build on early success 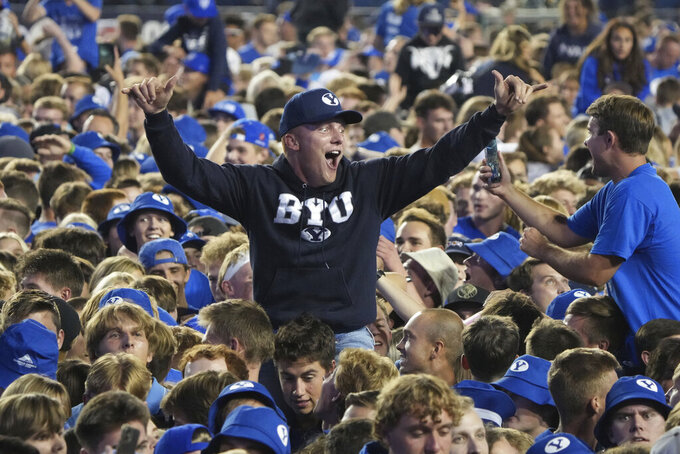 In the aftermath of a big win over Baylor, BYU's players celebrated with their raucous blue-clad fans who rushed the field in Provo, Utah.

The victory moved the Cougars (2-0) up nine spots to No. 12 in the AP Top 25 and gave the team a boost nationally in its final year as an FBS independent. But the attention quickly shifted to this Saturday's game at Oregon and the latest opportunity to make the season special.

Offensive lineman Connor Pay called it all “business as usual” at BYU.

“We love it when the fans get excited, especially after a big win like that, but for us our minds are all on Oregon now and preparing the same way we do every week,” he said. "After a very emotional win, we regroup, refocus and prepare the way we know how. As long as we do what we’re coached to do, then we’ll be okay and be ready to play.”

That said, it was a fun win to revel in. Lopini Katoa's 3-yard touchdown run lifted BYU to a 26-20 victory over the Bears in double-overtime.

Cougars quarterback Jaren Hall threw for 261 yards and a touchdown, and caught a 22-yard scoring pass from Chase Roberts, who also had a career-high 122 receiving yards and another score.

“It’s exciting to see how excited everybody else gets when we have a big win like that and you’re just overfilled with joy at that moment,” safety Malik Moore said. "In a moment like that, anything goes. I didn’t ask to crowd surf; they just picked me up. I was like, ‘OK, here we go.’”

The Ducks (1-1) are coming off a 70-14 win at home over Eastern Washington last weekend. The rout helped Oregon move on from its disappointing season-opening loss to Georgia.

While Georgia and Eastern Washington certainly aren't comparable opponents, first-year Ducks coach Dan Lanning said the goal is to see progress from one week to the next.

The victory also put Oregon back in the rankings at No. 25.

Saturday's game will be the first between two ranked teams at Autzen Stadium since 2018. The Ducks are riding a 20-game winning streak at home, the third-longest active streak in the nation.

Quarterback Bo Nix had something of a lackluster debut for the Ducks against Georgia, but he threw for a career-high five touchdowns against Eastern Washington. Success, as it turns out, breeds confidence.

“We wanted to complete passes and run the ball well, and we came out doing that in the first half,” said Nix, who completed his first 10 passes against the Eagles. “And when you're able to run the ball, it opens up the passing game.”

BYU had just 83 rushing yards on 33 carries against Baylor. That could be a problem against the Ducks' defense, which has held opponents to an average of 116 total rushing yards a game.

"We just need to do a better job at starting and sustaining our combo blocks because Oregon has great defense. They’re fast, they flow, so it’s going to be another challenge this week to run the football, and we need to be really consistent in our technique," Pay said.

Cougars starting offensive tackle Kingsley Suamataia is a transfer from Oregon. The former 5-star recruit played one game for the Ducks last year as a freshman.

“You could see the talent but it’s the things that he brings off the field that matter for us and fits with our culture," BYU coach Kalani Sitake said. “He loves being a part of this team. He loves his teammates and I think he feels really comfortable being here and he’s a hometown guy, so I think he feels comfortable in our offense and comfortable with our coaches.”

Oregon and BYU have split their series 3-3. The last meeting between the two was in 2006 at the Las Vegas Bowl, a 38-8 victory for the Cougars.

This is the first game at Autzen Stadium between the two teams since 1990. The Ducks upset No. 4 BYU 32-16 in a meeting that featured two big-name quarterbacks: Oregon's Bill Musgrave threw three touchdowns and ran for another. BYU's Ty Detmer was sacked five times. It was one of just three losses for the Cougars that season.