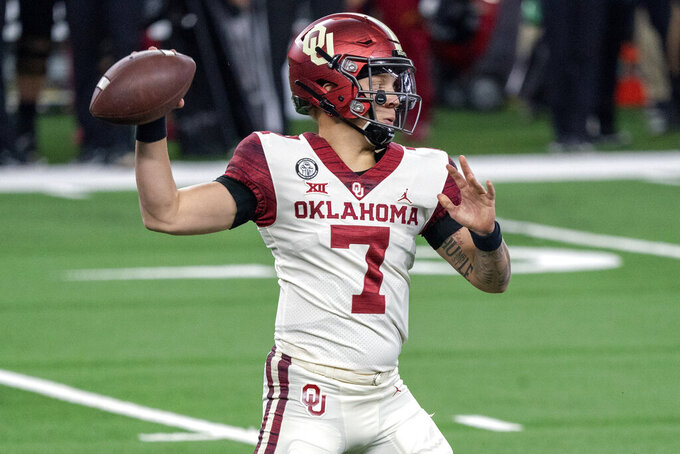 The Sooners got a bit of revenge Saturday when winning another Big 12 title game, with Spencer Rattler throwing a 45-yard touchdown to fellow freshman Marvin Mims and running for another score in a 27-21 victory over the No. 8 Cyclones.

“I’ve felt tremendous excitement after each one of them, but this one does feel different ... maybe the most unlikely,” said Riley, the fourth-year head coach who was the Sooners' offensive coordinator the two seasons before that.

That impressive title streak probably won't be enough to get the Sooners (8-2, No. 10 CFP) back in the College Football Playoff for the fourth year in a row, even when paired with their seven-game winning streak since that 37-30 loss in Ames, Iowa on Oct. 3.

Oklahoma still has its 14th Big 12 title overall in the league's 25-season history, and the 50th conference championship in school history.

“When we were 0-2 in the conference, and I told them a place like OU there’s nowhere to hide. It’s not like we’re just going to go off and have a bad season and people aren’t going to pay attention,” Riley said. “I think everybody in our locker room knew that this was possible at that point, and what a tremendous run it’s been.”

Big 12 rushing leader Breece Hall ran for two touchdowns for the Cyclones (8-3, No. 6 CFP) in the second half, when Oklahoma punted on its first five drives before Gabe Brkic's 32-yard field goal with 2:01 left. The Sooners finally clinched the game when Iowa State quarterback Brock Purdy was under pressure and threw his third interception, a fluttering pass picked off by Tre Brown inside the 10.

The Sooners will play in a New Year's Six game, probably back at AT&T Stadium, after winning their fourth straight Big 12 championship since the title game was reinstated — with four different starting quarterbacks. Rattler, who finished 22 of 34 for 272 yards and his 25th TD, is the first of those QBs who went to Oklahoma as a freshman instead of transferring into the program.

Iowa State played in a conference championship game for the first time in school history, though fifth-year coach Matt Campbell was incensed at times. Standout defensive back Isheem Young was ejected after a questionable targeting call in the opening minute, and the Cyclones later didn't get a fourth-down call when trying to draw Oklahoma offside even when two Sooners appeared to jump over the line.

Campbell lost it on the sideline, pointing and screaming, but like his team calmed down and got back in the game.

“I hope we just got respect on our name, on this university, to everybody outside of this program that we’re here to stay and we’re always going to play our butts off,” Cyclones receiver Xavier Hutchinson said.

Rattler hit Mims in stride behind two defenders on the opening play of the second quarter to put Oklahoma up 14-0. That came after a 16-yard catch by Mims to end the first quarter on a pass that first deflected off two defenders.

After Iowa State finally scored with 1:34 left in the first half on Purdy's 10-yard touchdown pass to tight end Charlie Kolar, the Sooners got a 43-yard kickoff return from Brown. That set up a quick four-play drive capped by Rattler's 9-yard keeper for a 24-7 halftime lead.

Iowa State: Purdy, the third-year starting quarterback, finished 27 of 40 for 322 yards. The first two picks he threw came immediately after he ran for big gains.

“I still think Brock was really good,” Campbell said. “I know there were times that the ball got turned, but there’s pressure. We’re nowhere close in that football game if Brock Purdy’s not our quarterback.”

Hall was held to a season-low 79 yards on 23 carries. He averaged 135.7 yards per game during the regular season, with 139 against the Sooners in October.

Oklahoma: The Sooners' streak of six consecutive outright league titles became the longest for a Power Five program since they won 12 consecutive titles in the old Big Eight from 1948-59. Clemson also won its sixth conference championship in a row, with a 34-10 win over Notre Dame in the ACC title game later Saturday..

Young, who in the October matchup had a clinching interception in the end zone with a minute left, was ejected only 33 seconds into the championship game after his targeting penalty. An official heard on an open mic explaining the call to Campbell said the receiver Young hit was defenseless, to which the coach responded with an expletive.

Iowa State: The Cyclones, still with a chance for their first nine-win season since 2000, are set to play in a bowl game for the fourth consecutive season. It could be a New Year's Six game.

Oklahoma: The Sooners are bowl-bound for the 22nd year in a row, likely the Cotton Bowl on Dec. 30.