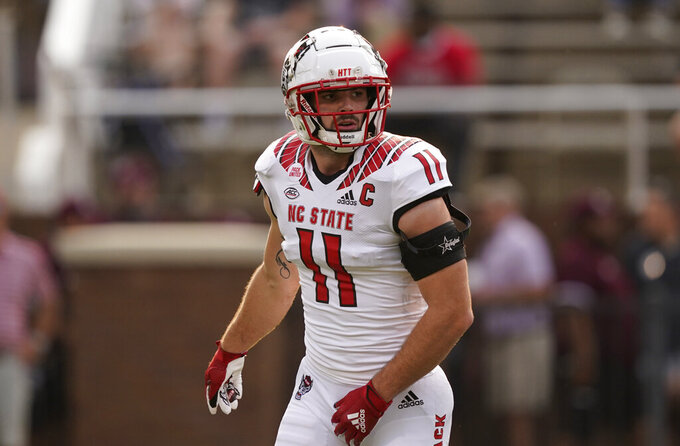 Dave Doeren looks at his 13th-ranked North Carolina State team as one that has taken a long journey to reach Saturday's opener at East Carolina, one rooted in the failures of a three-win season in 2019.

That same year stands as a reminder for Pirates coach Mike Houston, too.

The last time these instate foes met, the Wolfpack beat the Pirates 34-6 to open that 2019 season and Houston's tenure. Yet it was one of the only highlights in an injury-riddled mess for the Wolfpack, and a marker that serves as a reminder to both of how far they've come.

For Doeren — whose team has matched its highest Associated Press preseason college football poll ranking — those 2019 struggles offered a chance to evaluate what changes were needed to minimize the risk of a repeat.

“I'm thankful that I had to go through it because I'm better for having gone through it,” Doeren said. “It exposed things in our program that, had we not had some of those injuries and we were able to get to a bowl and maybe not have to really dissect what's wrong, we probably wouldn't be where we're at right now.”

Now N.C. State stands as one of the top Atlantic Coast Conference contenders, led by the preseason league player of the year in quarterback Devin Leary — who suffered through a rough first year as a starter in 2019.

“I think shared adversity is a critical part of a team,” Doeren said. “It's how you come together. It's going through creating scars.”

For Houston, his Pirates won just seven games through his first two seasons. But they qualified for a bowl game last year that was ultimately canceled due to COVID-19 issues for their opponent, a fate that also befell the Wolfpack.

“It was a spotlight on where our program was at that time in comparison to N.C. State's,” Houston said of the 2019 loss. “Now, I think there's been a lot of work done in recruiting, development and growth.

"There's a handful of guys that were on that field for that game in 2019 that are going to be on the field Saturday, and seeing how they've grown and seeing how the program has grown. It's a different program.”

This will be a tricky opener for the Wolfpack on the road in front of a crowd sure to be testy, rowdy and eager to see the American Athletic Conference team stick it to the power-conference neighbor.

And N.C. State has had its troubles in Greenville, located about 90 miles east of the Wolfpack's Raleigh campus. ECU is 4-1 against N.C. State at home, including a 33-30 win in the most recent meeting there in September 2016.

“They've done a great job with either developing players or getting transfers and giving him a lot of viable options to go to,” Houston said.

East Carolina dual-threat quarterback Holton Ahlers can test defenses with his mobility. But N.C. State has 10 starters back from a unit that ranked 14th in the Bowl Subdivision ranks in scoring defense (19.7) last year.

ECU running back Keaton Mitchell has proven he can move the chains on the ground, running for 1,132 yards and nine touchdowns last season. Now he's set to return kickoffs with the departure of Tyler Snead.

“No. 1, it's something he really wanted to do," Houston said. “No. 2, anytime we can get the ball in his hands, I think it's a plus. He's an experienced guy and a good decision-maker, which you've got to trust who you put back there at that deep returner spot."

“It's as healthy as I've ever seen a team coming out of training camp here because of the time they've had from a recovery standpoint," said Doeren, who is entering his 10th season.