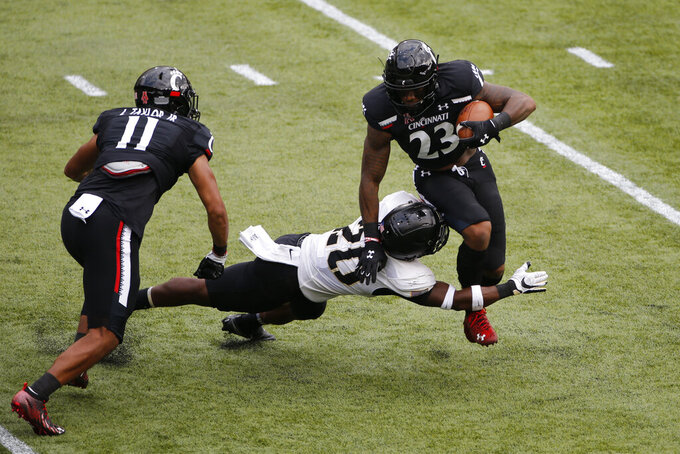 Cincinnati running back Gerrid Doaks, right, tries to escape the grasp of Army's Marquel Broughton during the first half of an NCAA college football game Saturday, Sept. 26, 2020, in Cincinnati, Ohio. (AP Photo/Jay LaPrete)

CINCINNATI (AP) — Cincinnati wanted to add a game to its non-conference schedule after some games were lost due to concerns over the coronavirus pandemic. When the Bearcats decided to put Army on the slate, Cincinnati coach Luke Fickell knew it would be a challenge.

“I tried to reiterate that to our guys all week,” Fickell said. “We tried to prepare them for that.”

Desmond Ridder passed for 258 yards and two touchdowns as No. 14 Cincinnati defeated No. 22 Army 24-10 in the first matchup of ranked teams at Nippert Stadium since 2008.

Army's vaunted triple-option offense came in averaging 389.5 rushing yards, but the Bearcats held the Black Knights to 182, 81 from junior QB Christian Anderson, who also passed for 94 yards on nine completions.

“I’m not sure we could have done much better," Fickell said of the defensive effort. "They gave us new wrinkles, some passes we hadn’t seen. We didn’t panic ... and found a way to make the plays.”

Army (2-1) shocked the Bearcats with a defensive touchdown just 51 seconds into the game. Ridder ran an option to the left, but his pitch to running back Charles McClelland was deflected by Army defensive back Jabari Moore, who recovered the ball and ran untouched 42 yards for a touchdown to put the Black Knights ahead 7-0. Moore also had an interception in the first quarter.

“We played our butts off," said Army coach Jeff Monken. “That is a very good football team. They are physical and got off of blocks. We wanted to establish the fullback, but they took him away. I’m disappointed but not frustrated.”

The Bearcats bounced back when Ridder completed a 45-yard pass to Jayshon Jackson and two plays later found Michael Young for a 12-yard TD, his first as a Bearcat, putting them ahead 10-7 in the second quarter.

“We expected to be open,” said Young, who had five catches for 60 yards. “We wanted to take what they gave us. We knew that we would have the opportunity in the red zone to get those one-on-one looks.”

Cincinnati finished with only 69 yards rushing but made the necessary adjustments.

“We talked about taking what they were giving us,” Fickell said. “It was tough sledding in there. They have big, physical strong guys. I don't know that we ever felt comfortable that we could establish the running game.”

The Bearcats (2-0) made a big special teams play late in the half when Ethan Tucky blocked an Army punt, giving them possession at the 7. But the Black Knights held on fourth-and-goal from the 1.

“Our defense played hard," Monken said. "Most of the game it was a one-score game. When they blocked the punt, which I’m embarrassed about, we had that goal-line stand. We played well. It just wasn’t enough.”

The Army defense, which ranked fifth nationally against the run, held the Bearcats to only 6 rushing yards in the first half. But momentum swung in the Bearcats' favor early in the third quarter when Anderson's fumble was recovered by linebacker Joel Dublanko near midfield.

The Bearcats rushed for 42 yards during a 60-yard scoring drive capped by Alabama transfer Jerome Ford's 4-yard run extending the lead to 17-7.

Cincinnati sealed the victory with a 60-yard TD pass from Ridder to running back Gerrid Doaks with 6:55 left. Army couldn't muster enough on offense to mount a comeback.

“We wanted to get the first option going with the fullback, but they did a good job of taking it away,” Anderson said. "We moved the ball some, but we had too many mistakes and penalties at times. We have to work on that.”

Army hasn't defeated a ranked opponent on the road since 1958. The Black Knights' last win over a ranked team came in 1972 when they beat No. 19 Air Force. Saturday's game was the first meeting between the two schools since 2004, when Army won 48-29 to end its 19-game losing streak, at the time the nation’s longest.

Cincinnati likely will move up after a victory over a ranked team coupled with losses by top-10 powers LSU and Oklahoma while Army likely will fall out of the Top 25.

Saturday's game was just scheduled on Aug. 26 when Army and Cincinnati agreed to a home-and-home series. Cincinnati originally was scheduled to play Nebraska on Saturday, before the Big Ten Conference postponed the start of its season. The Bearcats will play at Army on Oct. 4, 2031. Cincinnati had non-conference games against Western Michigan and Miami of Ohio canceled due to pandemic concerns. Army's game against BYU originally scheduled for Saturday was canceled last week when the Cougars had players test positive for COVID-19.

Army: The Black Knights held their own against a highly regarded team on the road, holding Cincinnati to 69 yards rushing and an average of 2 yards per carry. Too many penalties — 10 for 87 yards — prevented Army from gaining any sort of rhythm against a swarming defense that didn’t allow an offensive touchdown. Correcting those mistakes will be paramount going forward.

Cincinnati: The Bearcats' defense was stout, limiting the Black Knights, who entered the game as the the No. 1 team in the nation on third down (.714), to 3 conversions in 13 tries. The offense will have to regroup for Cincinnati to keep its season going in the right direction.