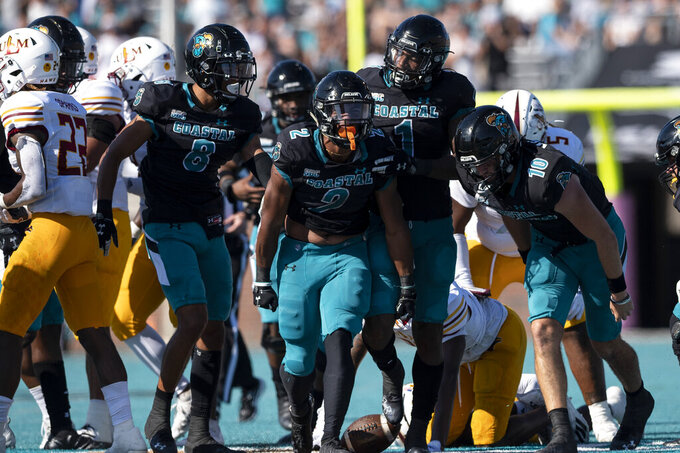 Reese White celebrates after a first down against Louisiana Monroe during the first half of an NCAA college football game on Saturday, Oct. 2, 2021, in Conway, S.C. (AP Photo/Matt Kelley)

McCall threw for 212 yards on 13-of-13 passing with two touchdowns to Isaiah Likely as the 16th-ranked Chanticleers rolled to a 59-6 victory to start Sun Belt Conference play Saturday.

The Chanticleers (1-0 Sun Belt) started 5-0 for a second straight season and have won 16 of their past 17 the last two seasons.

McCall played the first two quarters. When he returned to the sidelines for the second half, he had a walking boot on his left foot. Not to worry, Coastal Carolina coach Jamey Chadwell said.

McCall had his left ankle rolled on during the game, he said, and the boot was just extra protection to prevent anyone else accidently stepping on his foot.

“Grayson was taken out from a precautionary standpoint. He wasn't going to come back in the second half anyway,” Chadwell said.

McCall was moving easily in the boot.

Chadwell expects McCall to be ready when the Chanticleers face Arkansas State next Thursday. And they'll certainly need him to keep winning.

McCall was already the FBS leader in completion percentage and had little trouble keeping that going against the Warhawks (2-2, 1-1). He led Coastal Carolina to scores on all five first-half possessions for a 38-3 lead at the break, then watched the rest of the game from the sidelines.

Likely had five receptions for 95 yards, including scoring catches of 5 and 30 yards from McCall.

Brayden Bennett has touchdown runs of 10 and 29 yards for the Chanticleers.

Coastal's defense held its second straight opponent without a touchdown, limiting the Warhawks to 203 yards, while its special teams blocked a punt for a TD for the second time this season. CJ Beasley blocked Devyn McCormick's second-quarter punt and Aaron Bedgood returned it 9 yards for a touchdown.

“It was a hard one to take,” Warhawks coach Terry Bowden said.

“We weren't able to play with them offensively. We weren't able to tackle or stop them defensively and our kicking game, we had a blocked punt returned for a touchdown,” Bowden continued. “We're going to try and put this one behind us.”

Louisiana Monroe: The Warhawks hoped they had some momentum after defeating Troy last week in their Sun Belt opener. But Coastal Carolina showed Bowden's first-year program has a ways to go before competing with the top league teams.

Coastal Carolina: Expect more eyes on McCall and the Chanticleers' offense as it continues on the conference season. McCall has completed 69 of 86 passes for 1,113 yards and 10 touchdowns against just one interception.

Undefeated Coastal Carolina will likely continue its slow climb up the national rankings after defeating the overmatched Warhawks.

Coastal Carolina blocked its third punt of the season, with all leading to points. Alex Spillum blocked a punt against Kansas that he recovered for a touchdown. In the same game, the Chants blocked another punt out of the end zone for a safety.