No. 19 Iowa looks to stop skid when it visits Northwestern 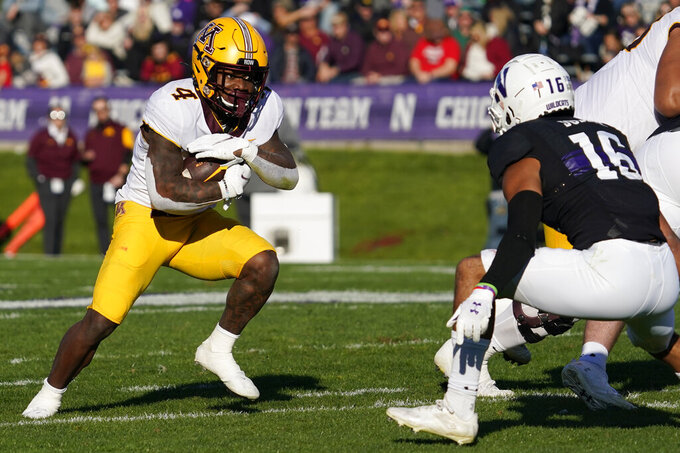 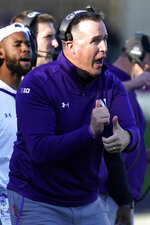 Iowa was rolling along, unbeaten at No. 2 in the AP poll and with its sights set on a spot in the College Football Playoffs just a few weeks ago.

The 19th-ranked Hawkeyes will try to steady themselves after back-to-back losses when they visit Northwestern on Saturday.

“There are a lot bigger things in the world going on than Iowa football losing two in a row,” center Tyler Linderbaum said. “I’m excited to see how we respond.”

The Hawkeyes (6-2, 3-2 Big Ten) were riding high and in the playoff picture at 6-0 for the third time in coach Kirk Ferentz’s 23 seasons following a win over then-No. 4 Penn State at Kinnick Stadium. But things turned in a big way after that.

Iowa got outscored by a combined 51-14 in losing at home to Purdue and, following a bye, at Wisconsin. The Hawkeyes are tied with the Boilermakers and Badgers in the Big Ten West, a game behind first-place Minnesota, and looking to regroup against struggling Northwestern (3-5, 1-4).

“You try to forge ahead,” Ferentz said. “I guess if there’s any good thing here, we have plenty of experience. You can go back historically and look at a lot of our seasons. Can’t think of many that didn’t have bumps and adversity along the way. Really, all you got to do is look at the last three years.”

Iowa lost three straight in 2018. The Hawkeyes dropped back-to-back games in 2019 and 2020, winning their final six last season after opening with losses to Purdue and Northwestern. But they are 31-11 over the past four years.

“I think everybody was fairly happy at the end of the season,” Ferentz said. “At least internally, we all felt pretty good about our team and the way we did things.”

Northwestern is coming off back-to-back blowout losses since beating Rutgers on Oct. 16 — 33-7 at Michigan and 41-14 to Minnesota. Coach Pat Fitzgerald pulled quarterback Ryan Hilinski in last week's game against the Gophers, and Andrew Marty completed 10 of 16 passes with a pair of touchdowns in his first appearance since Sept. 18.

Northwestern has fared well against the Hawkeyes in recent years, winning four of the past five meetings. The Wildcats rallied from 17 down last season in a 21-20 victory at Kinnick Stadium. Brandon Joseph had two interceptions, and Northwestern shut out Iowa in the second half.

The Hawkeyes rank 118th in the nation and 13th in the Big Ten in rushing, but they're going against a defense that is among the worst in the country at stopping the run. That could lead to a bounce-back performance for Tyler Goodson. The team's leading rusher has 95 yards on 25 carries over the past two games, including 27 yards on 13 attempts against Wisconsin.

With Ferentz and Pat Fitzgerald on opposing sidelines, the game will match the Big Ten's two longest-tenured coaches.

“There's just been such a high consistency of play with the Hawkeyes,” said Fitzgerald, in his 16th season. “They've got a brand and a style that shows up in all three phases. There's just a year-in and year-out consistency to it.”

One thing Iowa hasn't done much the past two games is force turnovers. The Hawkeyes have taken the ball away just one time in that span and have not picked off a pass, even though they lead the nation with 16 interceptions. Iowa has also committed seven turnovers over the past two games, throwing four interceptions against Purdue and losing three fumbles against Wisconsin.

This will be Northwestern's final appearance at Ryan Field this season. The Wildcats are scheduled to host Purdue on Nov. 20, though that game will be played at Wrigley Field. Northwestern also visits Wisconsin (Nov. 13) and Illinois (Nov. 27).