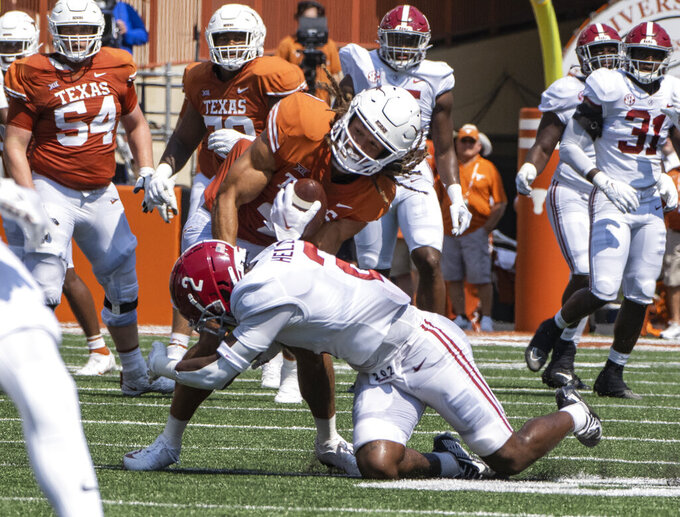 Texas running back Jordan Whittington is tackled by Alabama defensive back DeMarcco Hellams (2) during the first half an NCAA college football game, Saturday, Sept. 10, 2022, in Austin, Texas. (AP Photo/Michael Thomas)

Nick Saban doesn’t have to give his players a history lesson.

The Alabama coach need only point to last weekend’s Sun Belt Conference stunners ahead of Saturday’s game against Louisiana-Monroe, incidentally the architect of the most humbling loss of his tenure in Tuscaloosa. His current players weren’t out of elementary school at the time.

The second-ranked Crimson Tide (2-0), who tumbled from the top spot after barely surviving against Texas, host the Warhawks (1-1) on the heels of a huge week for ULM’s Sun Belt Conference brethren. Sun Belt teams pulled off upsets of Texas A&M, Notre Dame and Nebraska.

That should get the Tide players’ attention. Saban, for one, can’t forget a stunning 21-14, 2007 loss to the Warhawks in his first season.

“I don’t forget things, so I remember when these guys beat us,” the 70-year-old coach said. “I know that our players won’t remember that because history sometimes is not that important. And they were probably only, what would you say, 5-6 years old when that happened. But it kind of is what it is.”

The players won’t remember that, but they couldn't forget the Aggies and other recent Sun Belt victims.

“It just shows you can’t get complacent,” Alabama safety DeMarcco Hellams said. “We have to take all our opponents seriously. We have to prepare for every opponent the same way. We’re just preparing this week to make sure we’re not one of those teams.”

Those fresh upsets aside, ULM coach Terry Bowden knows Alabama has four- and five-star recruits and NFL prospects all over the field.

“Quite obviousy, coaches are coaches and you’d like to think that we had an impact on the game, but 99% of the time the team that has the best football players wins,” said Bowden, a former Auburn coach.

His team is a seven-touchdown underdog, according to FanDuel Sportsbook.

Alabama is still waiting for a breakout game from a receiver, any receiver. Nobody has consistently stepped up in replacing Jameson Williams and John Metchie III, though there are talented candidates like Jermaine Burton, Traeshon Holden and freshman Kobe Prentiss.

Speedy Louisville transfer Tyler Harrell hasn't played this season with a foot injury and remains out this week. “Hopefully, he'll be back sometime soon,” Saban said.

Alabama tight end Cameron Latu returned in the Texas game from an injury that sidelined him much of the preseason camp. Latu had four catches for 28 yards, including two 5-yarders on the drive for the winning field goal. He's trying to rebuild that connection with quarterback Bryce Young.

“We’re going to keep connecting, building the relationship we’ve been doing after practice, trying to catch up on the time we missed,” Latu said. “We’re going to get back to where it was.”

Coincidentally, both teams have already played Texas but with significantly different results. The Warhawks lost 52-10 while Alabama struggled but prevailed.

ULM is 4-49-1 against current SEC members, including one of the biggest wins in program history in Tuscaloosa. The Warhawks last beat an SEC team in the 2012 opener, a 34-31 victory over No. 8 Arkansas.

Bowden doesn't mince words on the talent differences, or the keys to handling such apparent mismatches.

“All you can do is what the teams in our conference did last week, get your guys ready to play, get them to believe that on any given day it can happen and go out and play the best you can,” the ULM coach said. “But the talent level is almost always the deciding factor in a ball game.”