No. 2 Ohio State seeks fast start against No. 5 Notre Dame 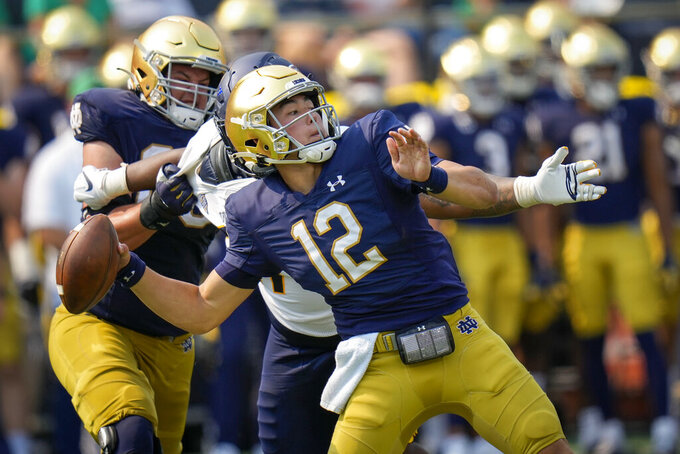 Line: Ohio State by 17 1/2, according to FanDuel Sportsbook.

The Buckeyes have one of the most explosive offensive attacks in the nation. Coach Ryan Day is stressing a fast start. New Ohio State defensive coordinator Jim Knowles installed a new scheme and a salty attitude in the unit. Emotions will be running high for first-year Notre Dame coach Marcus Freeman, who played linebacker at Ohio State in 2004-08 and coached at Cincinnati under Luke Fickell. There could also be some jitters for second-year Fighting Irish quarterback Tyler Buchner, who won the starting job in training camp. Notre Dame's defensive line is its strength.

Ohio State's passing game against Notre Dame's defense. The Buckeyes, behind quarterback C.J. Stroud, lit up the scoreboard last year with receiver Jaxon Smith-Njigba as his favorite target. They will have to operate against a secondary anchored by transfer safety Brandon Joseph.

Notre Dame: TE Michael Mayer is the best player on the team and an NFL talent. At 6-foot-4 1/2 and 265 pounds, he'll make his share of catches Saturday. He led all Irish receivers with 71 catches last season and was a finalist for the John Mackey Award.

Ohio State: QB Stroud. The third-year player put up some phenomenal numbers in his first season as the Buckeyes starter in 2021. He was a Heisman Trophy finalist and is a favorite again this season. He's got elite skill players around him and a massive and talented offensive line.