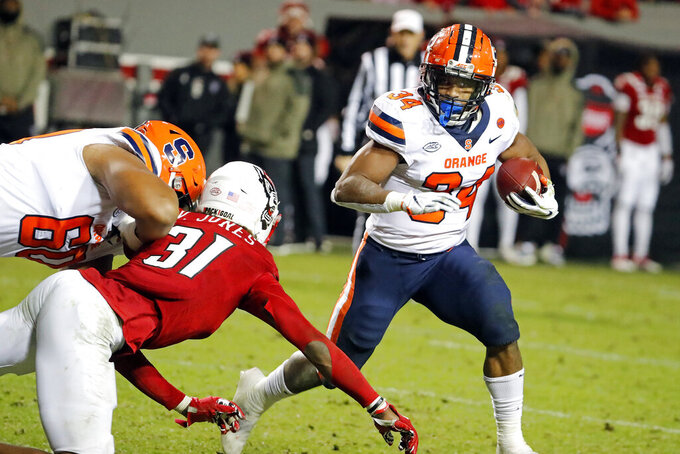 Syracuse's Sean Tucker (34) runs the ball away from North Carolina State's Vi Jones (31) during the second half of an NCAA college football game in Raleigh, N.C., Saturday, Nov. 20, 2021. (AP Photo/Karl B DeBlaker)

SYRACUSE, N.Y. (AP) — The pressure has reached a pinnacle for the Syracuse Orange: Win the regular-season finale against No. 20 Pittsburgh or there's no bowl game.

“There’s definitely a lot of pressure, but it’s a good type of pressure," redshirt senior defensive end Josh Black said. “We need this last win and a lot of the older guys are really trying to push for this. It would just mean a lot. We don’t want to end up on a bad note.”

The game against the Atlantic Coast Conference’s Coastal Division champion Panthers (9-2, 6-1, CFP No. 20) is Saturday night in the Carrier Dome, and Pitt has won 16 of the past 19 games in the series. Syracuse ( 5-6, 2-5) has dropped two in a row, lopsided setbacks on the road to Louisville and then-No. 25 North Carolina State.

“We can compete with anybody. We’ve shown that," Syracuse defensive back Garrett Williams said. "It’s just a matter of getting back into that rhythm again. Sometimes teams get hot and cold, so right now we’ve just got to get hot again.”

It’s perhaps the most important game in the six-year tenure of Orange coach Dino Babers. A loss would mean his fifth losing season.

“We’ve lost a couple of really close games that we should have won,” Black said. "We’re just not where I expected us to be. Obviously, adversity’s going to hit you in the face here and there. We’ve just got to find a way to respond to that, finish out the season strong.”

The Panthers have won three straight, including a division-clinching 48-38 victory over Virginia a week ago, and are 4-0 on the road. And there's extra incentive to keep those streaks going — they haven't won 10 games in a season since 1981.

“It’s been a long time,” Pitt coach Pat Narduzzi said. “To me, that means something. In 40 years, there’s something to prove.”

The Panthers are hoping to keep building momentum heading into their second appearance in the ACC title game, something they failed to do in 2018. Pitt wrapped up the Coastal Division with a win at Wake Forest, then headed to Miami and was drilled by the Hurricanes. A blowout loss to eventual national champion Clemson soon followed.

Narduzzi is hopeful this team is mature enough to not have history repeat itself.

“I don’t know if (the loss to Miami) had anything to do with (not) handling success, but we’ll find out,” Narduzzi said. “We’ll find out this weekend for sure.”

Pitt star Kenny Pickett has thrown for 3,857 yards and 36 TDs with only six interceptions. Stopping him and his favorite target, Jordan Addison, is a tall order. Addison has an ACC-best 1,272 yards receiving and has scored 16 touchdowns.

Pitt has the ACC's best defense against the run, allowing 98.8 yards rushing per game. Syracuse tops the conference in rushing, averaging 230.6 per game and 5.5 per carry. Orange tailback Sean Tucker, third nationally at 1,467, and QB Garrett Shrader have combined to rush for 2,250 yards and 26 TDs.

“We've been seeing great quarterbacks and running backs all year,” Pitt DT Calijah Kancey said. “This will be just another game. Our defense will come and play.”

Pitt is averaging 159.1 yards rushing per game, a 39-yard increase over 2020. Hammond is relishing his role as the “finisher.” Working primarily in the second half — and particularly in the fourth quarter — Hammond has run for 419 yards and five touchdowns, the last a 1-yard score last Saturday against Virginia that wowed Narduzzi.

“When you watch that guy run, his one touchdown, his 1-yard plunge in there was like the hardest 1 yard of the year,” Narduzzi said. “He was not going to be denied."

“They’re going to put pressure on the quarterback,” Narduzzi said. ”We’ve got to protect our quarterback better.”

AP Sports Writer Will Graves contributed to this report.