No. 22 Penn St hits road looking for another win over Auburn 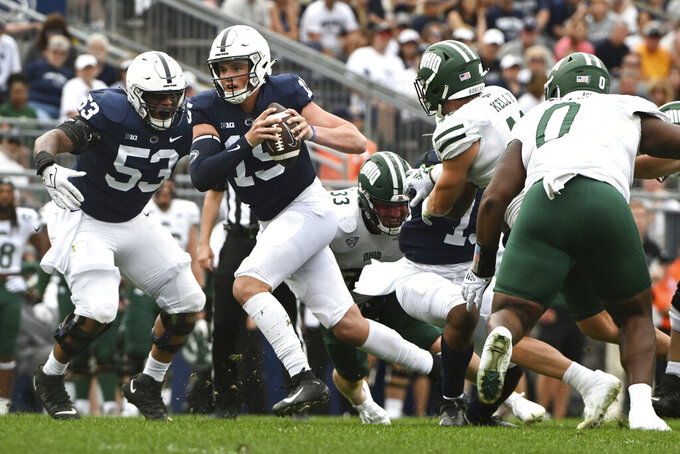 No. 22 Penn State at Auburn

Penn State's James Franklin could use a win here to really energize his program. Auburn's Bryan Harsin, whose job status has been a topic of conversation on the Plains since last year, desperately needs a sharper performance than the Tigers gave last week when they had to come back from a halftime deficit to beat San Jose State.

Last year’s Auburn-Penn State meeting produced one of the most entertaining games of the season, with the Nittany Lions making two late defensive stops to win 28-20 in front of a boisterous “Whiteout” crowd in Happy Valley. Auburn is making this an “Orange-out” game. Penn State has held opponent ground games in check so far, but it faces a big challenge with Tank Bigsby, who went for 102 yards and two touchdowns in last year’s game.

No. 6 Oklahoma at Nebraska

This matchup doesn't look great on paper, but there are great storylines. First, there's the nostalgia of two old conference rivals getting together. The teams combined for 44 of 48 Big Seven/Big Eight titles from 1948-95. Then there's the situation at Nebraska. Scott Frost was fired Sunday, three games into his fifth season, and another former Cornhuskers quarterback, Mickey Joseph, was named interim coach. Finally, first-year OU coach Brent Venables returns to his old neighborhood. He was a linebacker for Kansas State in 1991-92 and a K-State and Oklahoma assistant from 1993-2011.

No. 11 Michigan State at Washington

The Spartans, who make their first trip to Seattle since 1970, are out to a strong start defensively. Their 52-0 win over Akron last week was their first shutout since 2019, they lead the Bowl Subdivision with 12 sacks and their six takeaways are first in the Big Ten. Washington coach Kalen DeBoer eased his way into his first season against two overmatched opponents and now steps into the spotlight as the Huskies seek their first win in four meetings with Big Ten opponents.

A Purdue win at Syracuse would give Jeff Brohm (29-30 in six years) a .500 record with the Boilermakers. ... Each of Michigan's last seven possessions started and finished by J.J. McCarthy have resulted in touchdowns. ... Rutgers goes to Temple looking for a second straight 3-0 start for the first time since 2006-07. ... Minnesota hosts Colorado as the No. 1 team in the nation in total offense (582 ypg) and total defense (142.5 ypg). ...

Wisconsin's Braelon Allen is averaging 7.0 yards per carry over his last 11 games and will go against the 112th-ranked rushing defense in New Mexico State. ... Ohio State, which hosts Toledo, has never lost at Ohio Stadium (46-0-1) to an opponent from the Buckeye State. ... Iowa LB Jack Campbell, the 2021 national tackles leader, is averaging a Big Ten-best 10.5. ... Maryland QB Taulia Tagovailoa goes into his game against SMU with nine 300-yard passing games in his career, one shy of Scott Milanovich's program record.

Western Kentucky is a 6 1/2-point underdog at Indiana, according to FanDuel Sportsbook, and looking to avenge a 33-31 home loss to the Hoosiers last year. The Hilltoppers are coming off an easy win at Hawaii while Indiana had to come from behind to beat FCS Idaho. WKU is 0-9 against the Big Ten since joining the FBS ranks in 2007.

Ohio State WR Jaxon Smith-Njigba is expected to return against Toledo after missing last week's game against Arkansas State. He made two catches for 3 yards in the opener against Notre Dame before getting injured. Last year he was the No. 2 receiver in the nation with 123.5 yards per game, topped off by a record-setting performance against Utah in the Rose Bowl.