No. 22 Texas visits Texas Tech in Big 12 opener for both 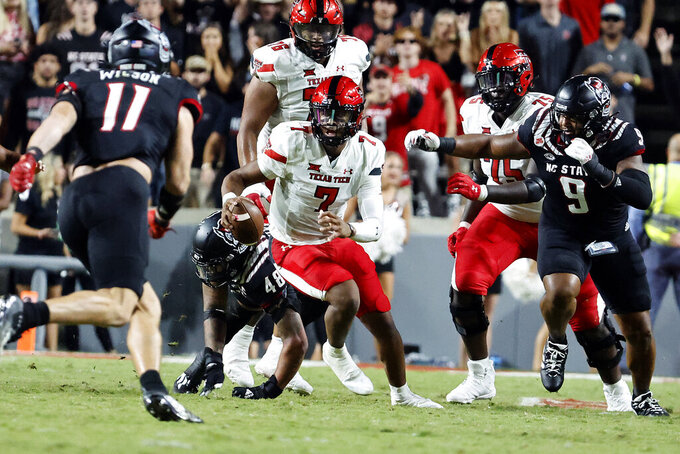 Texas Tech's Donovan Smith (7) scrambles with the ball during the second half of an NCAA college football game against North Carolina State in Raleigh, N.C., Saturday, Sept. 17, 2022. (AP Photo/Karl B DeBlaker)

Line: Texas by 7, according to Fanduel Sportsbook

The Big 12 opener for both teams is Texas coach Steve Sarkisian's first visit to Lubbock and the first game as a head coach against the Longhorns for Texas Tech's Joey McGuire. The former Baylor assistant and lifelong Texan won three state championships as a high school coach in the Lone Star State. This is the third consecutive year the schools have opened the conference schedule against each other.

Texas RB Bijan Robinson vs. Texas Tech's run defense. Robinson has at least 100 scrimmage yards in each of the first three games, including a season-high 183 rushing with three touchdowns in last week's 41-20 victory over UTSA. Edge rusher Tyree Wilson is Texas Tech's top NFL prospect with a penchant for sacks and tackling ball-carriers in the backfield.

Texas: LB Jaylan Ford has become the top playmaker for an improving defense and leads the team in tackles with 25. After getting caught out of position on Alabama’s 81-yard touchdown run in the Crimson Tide's 21-20 victory in Week 2, Ford has been a lockdown defender with good instincts and solid open-field tackling.

Texas Tech: QBs Donovan Smith and Behren Morton. Smith has five interceptions in two games since the Red Raiders blew out lower-division Murray State in the opener. The offense struggled in general in last week's 27-14 loss to No. 12 North Carolina State. As a result, Morton played in something other than garbage time for the first time. He threw Texas Tech's third interception against the Wolfpack.

The Texas QB situation is likely to remain a mystery until game time with Quinn Ewers recovering from a clavicle injury and Hudson Card playing through a high ankle sprain. Sarkisian said both practiced at the start of the week. Redshirt freshman Charles Wright is the third QB option. ... Texas has only one turnover in three games, none in the last two ... It's the third consecutive ranked opponent for the Red Raiders. They beat then-No. 25 Houston 33-30 in double overtime two weeks ago. ... This could be Texas' last visit to its longtime rival if the Longhorns leave for the Southeastern Conference in 2024 instead of 2025.